If you've been dreaming about retirement for decades, chances are you're itching to retire as soon as you can. However, more and more Americans find themselves working longer than they anticipated, sometimes working years past the traditional retirement age.

The average worker age 65 and older doesn't expect to be able to retire until age 72, a new survey from Provision Living found. Of those who are still working, 60% say the decision is a financial one. Nearly 4 in 10 say they simply can't afford to retire, and another quarter say they're still working to support their families.

While it's a good thing that workers aren't retiring before they're ready, centering your retirement plan around working as long as possible may not be the best idea. 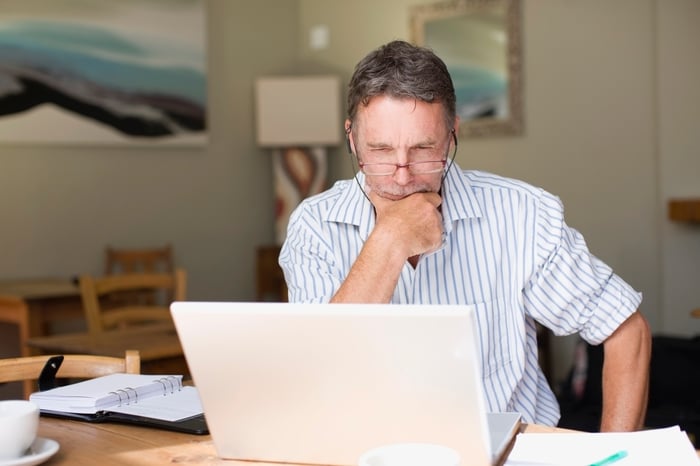 If your savings are falling short, you may simply choose to continue working into your 70s or beyond to make up for it. On the surface, this is a smart idea. Working even a few years longer can help you save thousands more for retirement, and because you're retiring later in life, you won't have to save quite so much.

That said, delaying retirement has its drawbacks -- particularly if life throws a wrench in your plans.

Close to half (43%) of retirees say they had to retire earlier than they had planned, a report from the Employee Benefit Research Institute found. Of those who were forced into an early retirement, the most common causes included health problems that prevented them from working and job loss due to company restructuring or downsizing.

These types of situations are out of your control and can crop up out of the blue, making them difficult (if not impossible) to plan for. However, if you're banking on the idea of being able to work forever, you're potentially putting your retirement at risk if things don't work out the way you'd planned.

How to plan for the unexpected

Nobody wants to think about the possibility of health issues or layoffs ending their career early, but it's important to at least have that thought in the back of your mind if you're expecting to work past the traditional retirement age. More importantly, though, it's a good idea to have a backup plan in mind, just in case you're forced into an early retirement.

The easiest way to avoid letting an earlier-than-expected retirement catch you off guard is to simply save more when you're younger. That way, you can continue working if you'd like, but in the event that you have to leave your job sooner than you anticipated, you won't be left in the lurch with next to nothing saved.

That option is not always possible or realistic, though, especially if you're already in your 50s or 60s with little in savings. In that case, you'll need a different strategy to maximize your retirement income.

For example, you may choose to delay claiming Social Security benefits for as long as you can. Although you can begin claiming at age 62, for every year you wait to claim, you'll receive approximately 8% more per year until age 70. That could result in hundreds more per month for the rest of your life, which can go a long way if your savings are falling short.

Besides maximizing your income in retirement, it's also important to minimize your expenses. Establish a thorough budget and map out all your costs to ensure you're not overspending on unnecessary expenses, and try to cut back wherever you can. Depending on how far behind you are on your savings, you may even choose to take drastic measures such as downsizing your home or moving to a less expensive city.

Even if you don't think it could happen to you, it's always important to plan for the unexpected. You could be in excellent health and in good standing at your job, but that doesn't mean life won't throw curveballs at you in the future.

Be realistic when choosing a retirement age, and make sure you're thinking about any potential drawbacks of working as long as possible. You may very well be able to work for as long as you'd like, but it's smart to have a backup plan in mind just in case that strategy doesn't pan out. By expecting the unexpected, you can bolster your retirement plan and enjoy your golden years as comfortably as possible.