Please ensure Javascript is enabled for purposes of website accessibility
Log In Help Join The Motley Fool
Free Article Join Over 1 Million Premium Members And Get More In-Depth Stock Guidance and Research
By Maurie Backman - Oct 2, 2019 at 8:48AM

It's one thing to be short on savings, but it's another thing to not care.

Without retirement savings, you'll risk struggling financially once your career comes to an end and the steady paycheck you once relied on goes away. Unfortunately, most Americans aren't doing an adequate job of building savings for their golden years. A good 45% say they have absolutely no money socked away in a retirement savings plan, according to a new survey by GOBankingRates, while 19% say they expect to retire with less than $10,000. Meanwhile, another 20% anticipate retiring with $10,000 to $100,000, but even the higher end of that range isn't a whole lot of money to work with over what could be several decades.

All told, only 16% of U.S. workers think they'll close out their careers with $100,000 or more in their nest eggs. But here's the kicker -- those who aren't on track savings-wise don't seem particularly torn up about it. A good 48% of those surveyed don't find it problematic that they're sitting on a minute amount of savings, and among those with $0 socked away, more than half aren't sweating it. 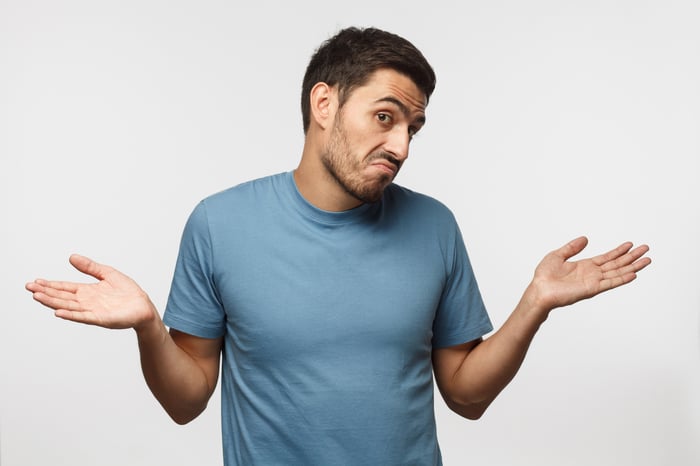 Now the truth is that if you're fairly young (say, in your 20s or early to-mid 30s) without much, or any, retirement savings, then there's definitely no need to panic. That's because you have plenty of working years ahead of you to make up for lost time. In fact, it's not uncommon for younger workers to spend the first decade of their career paying off student loans and saving for a home, and then ramp up their retirement plan contributions once they're more settled and their earnings have climbed. But if you're beyond your mid-30s and have yet to put any money aside for your golden years, you should consider this your wake-up call to start making that effort.

Some people don't save for retirement because they truly can't -- their income is maxed out by pressing bills. But for others, that lack of savings could boil down to ignorance, namely with regard to Social Security. Specifically, some people might avoid saving independently for retirement because they expect Social Security to cover their expenses when they're older, but if you're an average earner, you should know that those benefits will only replace about 40% of your previous income. Most seniors, meanwhile, need roughly double that amount to live comfortably.

Even if you anticipate being relatively frugal in retirement, you'll still have unavoidable expenses like housing, food, and healthcare to contend with, so living on 40% of what you're used to may not be feasible. And if you do manage to scrape by on that little, you can probably forget about doing things like traveling, pursuing hobbies that cost money, going out to dinner, or even enjoying things like cable.

Of course, if you're not used to saving anything, you'll be hard-pressed to suddenly max out either type of account. But if you make some lifestyle changes that free up cash on a regular basis, like cutting back on restaurant meals, canceling the gym membership you rarely use, or avoiding costly rideshares, you might manage to eke out an extra $200 a month. Invest that $200 a month over 35 years at an average annual 7% return, which is doable if you load up on stocks, and you'll be looking at about $332,000 in savings.

Now, if you're older, and you don't have another 35 years of work ahead of you, you'll need to think bigger and save more money each month to accumulate a comparable balance. That could mean downsizing your home or getting a second job to boost your earnings substantially. But if you manage to sock away $1,000 a month over a 15-year period, you'll wind up with a little over $300,000 in savings, assuming that same 7% average annual return. Make it $1,200 a month, and you'll have more like $362,000.

While it's true that some seniors do see their expenses go down in retirement, you can't plan to live on Social Security alone. If you don't have any money set aside for your golden years, stop what you're doing and start devising a plan to ramp up. Otherwise, there's a good chance you'll wind up struggling at a time in your life when you deserve better.