Please ensure Javascript is enabled for purposes of website accessibility
Log In Help Join The Motley Fool
Free Article Join Over 1 Million Premium Members And Get More In-Depth Stock Guidance and Research
By Katie Brockman - Nov 12, 2019 at 10:00AM

You may be doing more damage than you think by believing these common money myths.

Finances can be a touchy subject for many people. In fact, 57% of Americans say they intentionally avoid discussing money with friends, according to a survey from eMoney Advisor. Among those who are working with a financial advisor, nearly one-third say they're not completely honest about their spending habits.

It can be tempting to avoid thinking about money, or even lie about your finances to make yourself feel better. But that's not going to do you any favors. Although some fibs are relatively harmless, others could cause significant problems down the road.

These are some of the most common money lies people tell themselves, and if any of them sound familiar, it's critical to start being honest with yourself to make sure your finances are as healthy as possible. 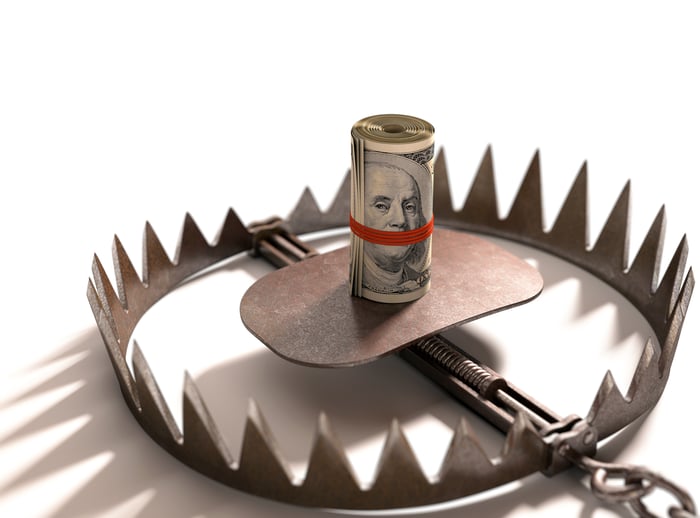 1. It's OK to hold off on saving for retirement because you have plenty of time left

Close to half (42%) of Americans say they'd rather wait to focus on saving for retirement until they get closer to retirement age, a report from the Transamerica Center for Retirement Studies found.

Although it's reasonable to assume you can afford to wait to start saving if you have decades left before retirement, every year counts. You'll likely need to build a retirement fund worth hundreds of thousands of dollars if you want your money to last through your golden years, and accumulating that much money isn't easy -- especially if you wait until the last minute to start saving.

Technically, it's not impossible to save a significant amount of money in a short period of time. But it's a lot more challenging than if you had started saving earlier. Say, for instance, you want to save $500,000 by the time you turn 65. If you started saving at age 30, you'd need to stash around $300 per month in your retirement account, assuming you're earning a 7% annual rate of return on your investments. But if you waited until age 50 to begin saving, you'd have to save a whopping $1,700 per month to reach that same goal.

No matter how old you are, what age you want to retire, or how much you want to save, it's crucial to start saving now. The longer you wait, the harder it is to catch up. Even if you don't have much to save, socking away even a little now will allow your money to grow substantially over the years -- which is far better than doing nothing and then needing to turbocharge your savings when you're older.

2. Debt isn't that harmful because everyone has it

It's easy to fall into the trap of thinking that because nearly everyone carries some type of debt, it must not be harmful. But debt can be dangerous, particularly if you're saddled with high-interest credit card debt.

Among those who have credit card debt, the average balance is around $6,028, according to a recent study from The Ascent. That's a lot of debt, particularly when many credit cards charge interest rates of 15% to 20% per year. Depending on how much debt you have, it could take years before it's paid off completely -- not to mention you could end up spending hundreds or even thousands of dollars on interest alone.

For example, say you have $6,000 worth of debt, you're paying 18% interest on your credit card, and you're making minimum payments of $150 per month. At that rate, it would take you more than 5 years to pay off your debt, and you'd end up paying more than $3,000 in interest alone during that time.

In some cases, debt may be unavoidable. For instance, you may not be able to afford to go to college without taking on student loan debt, and most people who want to buy a home have to get a mortgage. Although those forms of debt aren't quite as harmful as credit card debt, they can still be dangerous if you're not careful. Try to avoid taking on debt unless it's absolutely necessary, and be cautious about overloading yourself with debt. If you're buying a home, make sure you can comfortably afford the monthly mortgage payment without busting your budget. Or if student loans are costing you an arm and a leg, think about whether refinancing your loans could lower your monthly payment.

Most people give considerable thought to making big purchases, like buying a car or taking an expensive vacation. But it's easy to overlook small, everyday purchases, thinking that spending a few dollars here and there won't significantly impact your overall financial situation.

However, those small purchases can cost you more than you think. Say you spend $15 per day on minor purchases -- for instance, a cup of coffee in the morning, a candy bar at the gas station in the afternoon, and takeout for dinner. When you look at those purchases individually, they don't seem like much. But if you spend $15 every day for a year, that amounts to nearly $5,500.

Now, you don't have to give up those expenses entirely. But what if you were able to cut those costs in half by spending $15 every other day? Then, what if you took it a step further by investing those savings in your retirement account? Say you're able to save $2,750 per year by limiting your everyday purchases, and you invest that money in your retirement fund earning a 7% annual rate of return. After 10 years, you'd have nearly $40,000 stashed away.

That's not millionaire money, of course, but it's far better than nothing. And the best part is you don't have to make major sacrifices. By simply being aware of how much you're spending each day and cutting back where you can, you can ultimately save tens of thousands of dollars.

Managing your money can be stressful, but if you're lying to yourself about your finances, the situation will never get any better. Fortunately, a little knowledge can go a long way. The more you know about how your decisions impact your financial health, the easier it will be to make smart choices and set yourself up for long-term success.