The concept of early retirement has really taken off. Read the news, and you'll hear some story of a thirty- or fortysomething couple quitting their jobs to spend the rest of their lives traveling.

Retiring that early, however, is difficult to do, and it's something only a small percentage of workers manage to achieve. Retiring a few years early, on the other hand -- such as in your late 50s or early 60s -- is far more feasible, and you don't need to make the same extreme sacrifices, like living out of your van for a decade or more to save money on housing, to get there.

How much are you willing to give up?

Those people who retire in their 30s or 40s? Often, they're able to do so because they earned a ridiculously high income for a period of time, or had a fantastic business idea that really took off. 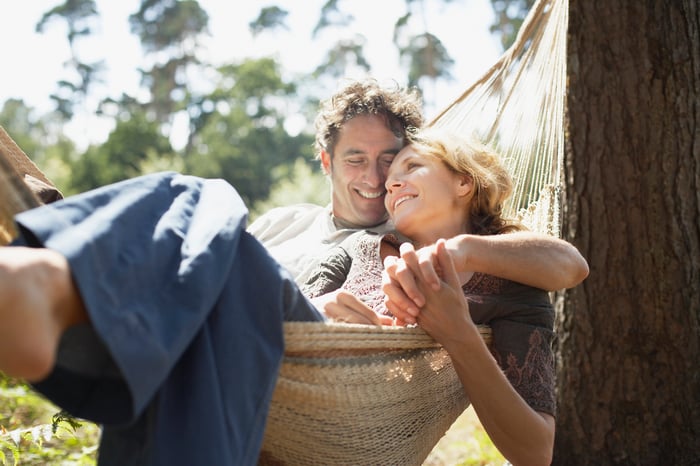 But that's not always the case. Some people who retire very early do so by making extreme sacrifices -- buying those tiny homes that can barely squeeze in a family, spending virtually no money on leisure and entertainment, and skimping on services like utilities and transportation to the greatest extent possible.

There's nothing wrong with doing any of that if you really want to exit the workforce in your 30s or 40s. But if you reasonably enjoy your line of work, and your early retirement goal stems from a desire to have more time to travel, or perhaps pursue a business of your own without having to worry so much about its income potential, then it may not pay to limit yourself so extensively during your first 20 years or so in the workforce. Instead, a middle-ground approach might give you what you need -- a chance to enjoy life while you're working, and the opportunity to exit the workforce several years ahead of the typical American.

The dangers of retiring extra-early

Retiring before your late 50s could pose some challenges -- namely, that you're not allowed to take withdrawals from your IRA or 401(k) prior to age 59 1/2 without risking a penalty. Furthermore, the earliest age you're allowed to claim Social Security benefits is 62, which means that if you're looking to leave the workforce much earlier, you'll need another source of income to cover your living costs.

This isn't to say that you can't retire before 59 1/2, or before 62. But if you aim to retire at, say, 55, the aforementioned income sources will be unavailable to you for a shorter period of time. You'll also only need to cover the cost of health insurance for 10 years until Medicare kicks in -- and to be clear, that's a long time, but a far cry from the folks who retire at 40 and need to fund their health insurance premiums for decades.

If you're hoping to retire early, it doesn't necessarily pay to force yourself to live in a box with your spouse and two kids for 15 years to get there. Instead, settle for living well below your means rather than extremely below your means. If you can afford a monthly mortgage payment of $1,500, buy a home that costs half that amount instead, but that's still comfortable. If you're fine driving a paid-off, 15-year-old car, hold off on getting a new one as long as possible. And if you're eager to save a lot for the future, stay away from restaurants for the most part and cook at home to avoid paying huge markups for food.

Imagine that doing these things allows you to save $2,000 a month over 25 years. If you invest that money at an average annual 7% return, which is doable with a stock-heavy portfolio, you'll be sitting on $1.5 million, which could make leaving the workforce early more than feasible. And while you could cut back even further to try to save, say, $2,500 a month, that extra savings might result in a situation where you no longer get to enjoy your life in a reasonable fashion.

It's one thing to live frugally, but it's another thing to make yourself miserable on the road to early retirement. If you slowly but surely build cash reserves rather than go to extremes, you may not get to retire at 35 or 45 -- but given the average life expectancy today, if you manage to retire before the age 60, you should still have plenty of time to enjoy your days on your own terms.