Retirement should be an exciting period of life -- not a stressful one. But if you fall victim to these blunders, you could end up hating your golden years rather than cherishing them.

Though Social Security will help you pay the bills once you stop working, those benefits won't be enough to sustain you in the absence of outside income. If you're an average earner, you can expect Social Security to replace about 40% of your former paycheck, but most seniors require roughly double that amount to live comfortably. That's why it's crucial that you save independently during your working years -- yet as of late 2019, an estimated 64% of working Americans had less than $10,000 socked away for the future. 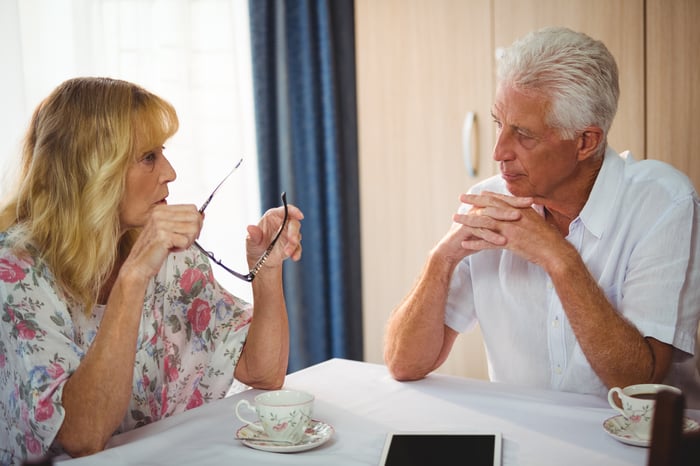 Though there's no magic retirement savings target that guarantees you a lifetime of financial security, one good rule of thumb is to aim to retire with 10 times your ending salary. If you're earning $80,000 a year later on in your career, working toward an $800,000 IRA or 401(k) balance is therefore a good goal.

But don't expect to amass that level of savings in just a few years; it'll take decades of consistent contributions to make that happen. However, if you start socking away $500 a month at the age of 30, and you do so until age 65, you'll wind up with a bit more than $800,000, assuming you invest your savings at an average annual 7% return, which is a few percentage points below the stock market's average.

Just as you're responsible for taxes during your working years, so too must you pay the IRS a share of your income during retirement. Yet many seniors assume that their retirement income will be completely tax-free, and as such, get thrown for a financial loop later in life.

The only way to avoid taxes on your retirement savings is to house them in a Roth IRA or 401(k). Stick to a traditional savings plan, and your withdrawals will be taxed as ordinary income once you start taking them. You'll also pay taxes on the interest you earn in a regular bank account, yearly investment gains in a traditional (non-tax-advantaged) brokerage account, or money you earn from a part-time job you decide to hold down.

Furthermore, if you're a moderate earner or higher, your Social Security benefits will likely be subject to federal taxes. And if you live in one of the 13 states that tax Social Security, you may lose an additional portion of your benefits by virtue of your zip code. Know what taxes you're liable for during your golden years so you can work them into your financial plan.

Your monthly Social Security benefit during retirement is based on your earnings history, but you can't collect that benefit in full until you reach full retirement age. That age depends on your year of birth, and it's either 66, 67, or 66 and a certain number of months.

You're allowed to claim Social Security before reaching full retirement age, but for each month you file early, your monthly benefit gets reduced. File at the earliest possible age of 62, and you'll be looking at a reduction of 30% if your full retirement age is 67. That's a huge hit to absorb on a lifetime basis, especially if you're entering your golden years without a comfortable IRA or 401(k) balance, so think twice before claiming Social Security on the early side.

You should also know that if you delay your filing past full retirement age, you'll boost your benefits by 8% a year, up until you turn 70. That's a good option to consider if you're coming in with very little savings and don't intend to work part-time once your main career comes to a close.

4. Entering your golden years with debt

Once you retire, you'll effectively move over to a fixed income. You can boost that income by working part-time, but chances are, you'll be on a relatively strict budget. It therefore stands to reason that if you kick off retirement with existing debt, it could put a strain on your limited income, thereby making it more difficult for you to manage your expenses.

A better solution? Aim to knock out your debt prior to retirement, and that includes your mortgage. Keep in mind, though, that mortgage debt is generally the healthiest type to have, so you're better off tackling credit card debt first, and then moving on to your mortgage once the former is gone.

You deserve a rewarding, stress-free retirement, so don't let the above mistakes prevent that from happening. Avoid these blunders, and you'll have less to worry about once you leave the workforce for good.