Please ensure Javascript is enabled for purposes of website accessibility
Log In Help Join The Motley Fool
Free Article Join Over 1 Million Premium Members And Get More In-Depth Stock Guidance and Research
By Maurie Backman - Jan 22, 2020 at 7:18AM

It's time for today's workers to get schooled on building a nest egg.

Most of us can think back to our school days and recall a time when actual grades really mattered. And while getting an A wasn't always in the cards, generally speaking, anything below a B was considered not that great in the grand scheme of academics.

But new research from TD Ameritrade shows that the bulk of Americans are doing poorly on the retirement savings front. In a survey of adults aged 40 to 79, most give themselves a C or lower on the progress they've made building their nest eggs.

These harsh grades aren't surprising given that the same survey found that 32% of Americans in their 40s through 70s have less than $50,000 socked away for the future. And only 10% have amassed $1 million or more in savings. 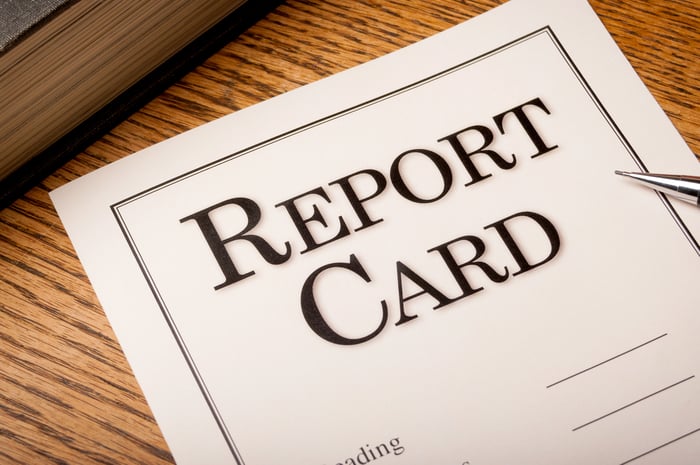 If your financial efforts barely get a passing grade, it's time to ramp up your savings. Otherwise, you might really be in for a financial shock when your career comes to a close and the paycheck that comes with it disappears.

You need a healthy nest egg to retire

Some workers neglect their savings because their income is eaten up by near-term bills, like paying the mortgage or putting food on the table. For others, that lack of savings stems from an overreliance on Social Security. Those benefits will replace about 40% of the average worker's preretirement earnings, but most seniors need a good 70% to 80% of their former income to maintain a reasonably comfortable lifestyle. The difference, therefore, must come from personal savings.

If you're just around 40 with under $50,000 in your IRA or 401(k), the situation isn't all that dire, since you still have several decades of work ahead of you to catch up. In fact, if you were to start socking away $500 a month in either account and continue doing so for the next 25 years, you'd wind up with roughly an additional $380,000 if your retirement plan generates an average annual 7% return during that time, which is a few percentage points below the stock market's historical average.

If you're older, however, you'll need to do better, and that could mean making serious lifestyle changes to free up more cash, like downsizing your living space or going from a two-car household to sharing a single vehicle. It could also mean having to get a second job to eke out money for savings. But if you don't make that effort today, you're likely to struggle down the line.

The more financially prepared you are going into retirement, the happier you're likely to be during your senior years. If you're among the more than 50% of Americans whose savings are only worthy of a C grade or lower, a modest effort on your part could help you land in solid A territory by the time your stint in the workforce ends.