Please ensure Javascript is enabled for purposes of website accessibility
Log In Help Join The Motley Fool
Free Article Join Over 1 Million Premium Members And Get More In-Depth Stock Guidance and Research
By Maurie Backman – Feb 4, 2020 at 7:23AM

Many younger workers are at a very real risk of falling short financially later in life, and fear itself may be a big part of the problem.

Retiring on Social Security alone may seem feasible until you realize that the average senior today collects just $18,000 a year in benefits from the program. That's hardly enough to cover basics like housing, healthcare, transportation, food, and other such essentials, and it's certainly not enough to provide a reasonably comfortable lifestyle. It's for this reason that workers need to save on their own for their golden years -- so that they have an independent income source to help cover their bills.

But just saving money in a dedicated retirement plan isn't enough. You need to invest that money in an aggressive enough fashion that its growth well outpaces inflation, expanding it into a sum large enough to support you  -- and therein lies a big problem.

New data from Fidelity tells us that fully 40% of millennials are investing their nest eggs too conservatively. The result? They risk a stark choice: Either postpone retirement (perhaps indefinitely) or retire on schedule and risk outliving their inadequate savings. 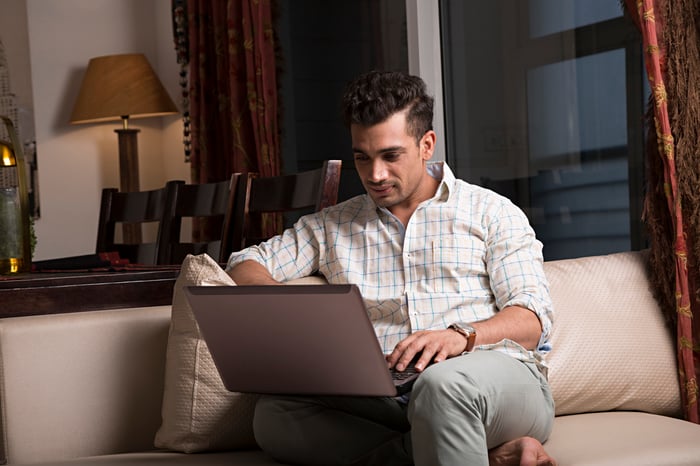 Why you need to save aggressively

A dollar today won't be worth a dollar in the future. Thanks to inflation, the value of money erodes over time. Now, at a macro-economic scale, a bit of inflation is a good and necessary thing -- the experts of the Federal Reserve have determined that about 2% a year is a healthy target. But on a personal scale, it can sometimes be a pain. So when you're saving for a distant goal like retirement, you need to invest your money in a manner that gives you the best shot at stronger long-term returns.

For millennials, that generally means loading up on stocks, as opposed to "safer" investments like bonds. The stock market has historically delivered around a 9% average annual return, which well outpaces the general rate of inflation (roughly 3% a year). With bonds, the risk of losing money on your investment is much lower -- but the rates they return are generally much lower too.

Consider this example: Imagine you're able to save $300 a month for retirement over a 40-year period. With a portfolio that's largely concentrated in stocks, there's a good chance you'll generate an average annual 7% return. At the end of those four decades, you'll have a portfolio worth $719,000. But if you stick to bonds and generate an average annual 4% return instead, you'll have just $342,000. That gap could spell the difference between retiring on time and in a comfortable manner, or not.

Have some faith in the stock market

Some people fear to invest heavily (or at all) in stocks because they've seen what happens during those volatile periods when the market plunges -- or what they think happens. While it's true that the stock market does have money-losing periods -- it goes down about one year out of three -- it also has a history of recovering nicely from those downturns.

For millennials who are investing for retirement -- a goal that could be 30 years away or more -- there's plenty of time to hold on to your stocks, ride out the market's ups and downs, and come out ahead.

So what percentage of your retirement portfolio should be in stocks? One common rule of thumb is to subtract your age from 110. Thus, if you're 30, you should have 80% of your portfolio in stocks, the rest in bonds and similarly conservative investments. Of course, there's wiggle rule with that formula, but it's a good starting point. And if the idea of picking individual stocks makes you uneasy, you can always go take the "gentleman's C" approach and buy index funds instead. Those funds track major market indexes like the S&P 500 (hence the name), so there's not a lot of research to do on your part. You'll get something very close to the average return of the market, and the diversification they offer means you avoid the risk of getting burned heavily by any specific stock's bad performance.

Playing it too safe with your retirement savings is a good way to come up short later in life. If you've been shying away from stocks thus far, it's time to start taking a more aggressive approach -- before you truly regret it later on.