Please ensure Javascript is enabled for purposes of website accessibility
Log In Help Join The Motley Fool
Free Article Join Over 1 Million Premium Members And Get More In-Depth Stock Guidance and Research
By Maurie Backman - Feb 6, 2020 at 8:07AM

If your IRA or 401(k) balance isn't as healthy as you'd like it to be, here are a few Social Security moves that can help make up for it.

Social Security isn't meant to sustain you in retirement by itself. Your benefits will replace around 40% of your former paycheck if you're an average earner, and most seniors need far more than that to live comfortably.

That's why workers are often encouraged to save for retirement on their own. But in a recent TD Ameritrade survey, 37% of Americans in their 50s and 28% of those in their 60s say they have less than $50,000 set aside for their senior years.

If you're nearing retirement and are behind savings-wise, a few smart Social Security moves could help you compensate. Here are a few to consider. 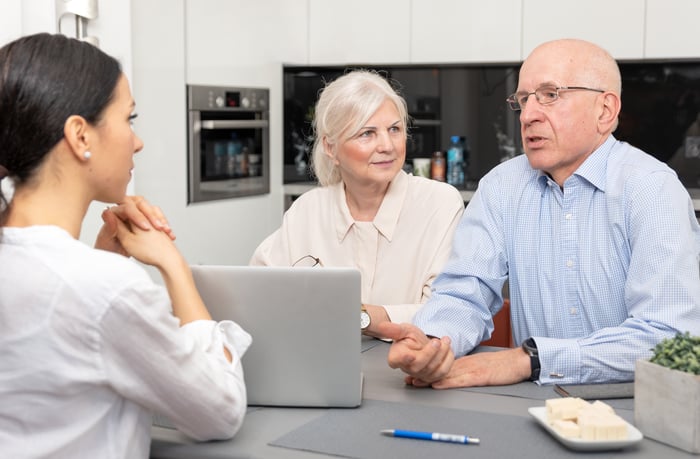 You're entitled to your full monthly benefit based on your earnings history once you reach full retirement age. That age is either 66, 67, or 66 and a certain number of months, and it depends on your year of birth. But you don't have to claim benefits at full retirement age. Rather, you can delay your filing and boost your benefits by 8% for each year you do, up until you turn 70.

Imagine you're entitled to $1,600 a month from Social Security at a full retirement age of 67. Wait until 70 to claim those benefits instead, and you'll get paid $1,984, which is a good way to raise your monthly income.

Working longer will allow you to leave your limited savings untouched a few extra years, thereby stretching your nest egg further. But that's not all. If your earnings are substantially higher toward the end of your career than they were earlier on in your career, you can boost your monthly benefit by virtue of that alone.

Your Social Security benefits are calculated by taking your average monthly wage, indexed for inflation, over your 35 highest-paid years on the job. Now, let's say you have several years where you earned $50,000 that are being factored into your benefits calculation, only you're now earning $120,000. Replace two years of $50,000 with $120,000, and your benefits stand to go up.

However, there are states that tax Social Security income individually, so if you avoid them during retirement, you won't have to worry about losing a chunk of your benefits. These are the 13 states that tax benefits to some degree:

Now, most of these states do offer an exemption for lower earners, so the reality is that if you move to one as a senior, you may get to keep your entire benefit anyway. But Minnesota, North Dakota, Vermont, and West Virginia don't offer an exemption at all.

Ideally, you should enter retirement with a healthy level of savings. In fact, it's a good idea to aim to sock away 10 times your ending salary before bringing your time in the workforce to an end. But if that's not feasible, scoring a higher payday from Social Security is a good way to make your senior years as financially healthy as possible.