Please ensure Javascript is enabled for purposes of website accessibility
Log In Help Join The Motley Fool
Free Article Join Over 1 Million Premium Members And Get More In-Depth Stock Guidance and Research
By Maurie Backman - Feb 11, 2020 at 7:36AM

Americans have a tendency to go overboard on Valentine's Day, but if you do the same, you might really regret it.

If you have a special someone in your life, you may, at this point, be gearing up to spend a small fortune in conjunction with a certain Feb. 14 holiday. Valentine's Day may be a nice tradition, but it can also be a huge budget-buster if money is tight. Throw in pressure from the media -- and social media -- to exceed expectations, and you're looking at racking up serious debt in an effort to give your loved one a day to remember. And that, frankly, is a good way to hurt your finances for no good reason.

What will Valentine's Day cost you?

The average consumer celebrating Valentine's Day anticipates spending $196.31 this year, up 21% from the previous year, reports the National Retail Federation. All told, U.S. spending is expected to total $27.4 billion. 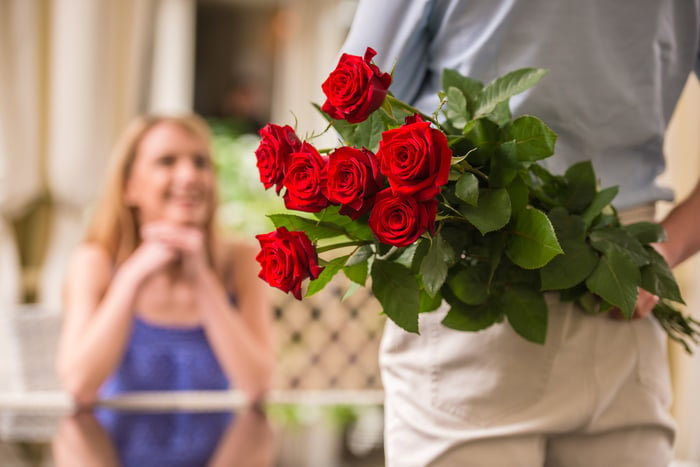 Why such high numbers? Part of it boils down to the fact that consumers don't necessarily limit their spending to their significant other. Some are making plans to spend on other family members, their children's friends and teachers, and even their pets.

There's nothing wrong with being an active Valentine's Day participant -- especially if your spouse or partner sets that expectation. But you don't need to spend close to $200 to make that day meaningful.

Rather than spring for a fancy prix fixe dinner, cook a nice meal at home. Instead of buying a dozen expensive roses, buy cheaper flowers, or skip them and opt for a lower-cost box of chocolates. And if you're tempted to shower people other than your spouse or partner with candy, cards, or gifts, exercise restraint -- especially with your pet, who really does not need a pink-and-red collar with hearts on it to mark the occasion.

Of course, if you're doing well enough financially to swing a $196.31 Valentine's Day tab, then by all means, go for it. But a large number of Americans aren't financially stable enough to part with that much money to celebrate a single day. An estimated 39% of U.S. adults don't have enough money in savings to cover a mere $400 emergency. If you're part of that statistic, then you definitely can't afford to spend half that much on flowers, candy, and an overpriced meal.

Furthermore, if you're already in debt, spending close to $200 on Valentine's Day is only likely to dig you deeper into that hole. And remember, if you're forced to charge your Valentine's Day expenses on a credit card and then pay it off over time, you'll end up spending more than that when you factor in interest charges.

Another thing: If you're behind on retirement savings, that $196.31 could actually make a decent dent in your nest egg over time. Let's imagine you're 25 years old and have 42 years until retirement. If you were to sock away that sum in an IRA or 401(k) and invest it at an average annual 7% return (which is a reasonable assumption for a stock-heavy portfolio), you'd turn it into $3,365.

It's easy to buy into the hype of Valentine's Day, but before you go overboard on the spending front, think of what that money might do for you instead. And then go ahead and plan a low-key but romantic night that your loved one will truly appreciate.