Please ensure Javascript is enabled for purposes of website accessibility
Log In Help Join The Motley Fool
Free Article Join Over 1 Million Premium Members And Get More In-Depth Stock Guidance and Research
By Maurie Backman - Feb 16, 2020 at 9:18AM

Don't set yourself up for disaster.

We can't all be financial-planning experts, and so when it comes to gearing up for retirement, many people have no choice but to heed the advice that's already out there. But if there's one rule of thumb you probably don't want to follow, it's the 4% rule. Though this classic piece of retirement advice may be quite popular, it could result in one large financial mess.

Developed back in the mid-1990s, the 4% rule states that if you start out by withdrawing 4% of your retirement savings balance your first year out of the workforce, and then adjust your subsequent withdrawals to account for inflation, your savings should last you 30 years. Given that the average 65-year-old today is expected to live until his or her mid-80s, that's pretty good reassurance, in theory, for anyone retiring in his or her 60s. But while the 4% rule may have once made sense, it's actually not great advice to follow today. 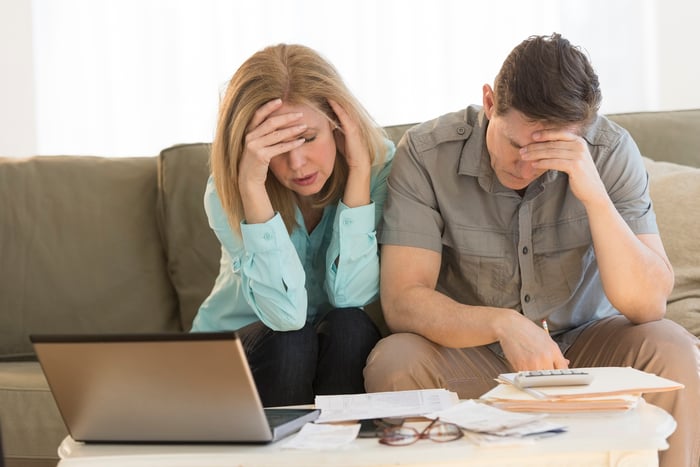 Perhaps the biggest flaw associated with the 4% rule is that it makes assumptions about how seniors have their savings invested. You'll often that hear it's wise to shift toward safer investments during retirement to limit your exposure to stock market volatility. Some seniors, however, take that to an extreme, mostly dumping their stocks investments and loading up heavily on bonds instead. The 4% rule, however, is based on an asset split of 60% stocks and 40% bonds. A portfolio with 20% stocks and 80% bonds will generate much less growth, and as such, won't be set up to support annual 4% withdrawals.

Furthermore, back in the mid-1990s, bonds paid a lot more interest than they do today. As such, seniors at that time saw a lot more growth from the bond portion of their portfolios. But since interest rates have dropped, bond positions today can't support a 4% annual withdrawal rate like they once could.

How much of your savings can you afford to withdraw each year?

Rather than rely on the 4% rule as gospel when making plans to tap your nest egg, use it a starting point, but adjust it based on your specific circumstances. First, take a look at your savings and see how your money is allocated. If you're heavily invested in stocks that are doing well, that supports a higher withdrawal rate. If you're mostly invested in bonds, you'll need to withdraw more conservatively.

Next, figure out how long a retirement you're looking at. Of course, in the absence of a crystal ball, it's impossible to predict how long you'll live. But if you're retiring at age 62 and you know the typical senior will live until his or her mid-80s, you should probably plan on needing at least 30 years of income, since one in three 65-year-olds today will live past the age of 90 . On the other hand, if you don't retire until you turn 70, you may be safe to plan for 20 to 25 years of withdrawals.

The other income you have access to in retirement should factor into your decision as well. If you have earnings from a part-time job, you can use that money to pay your bills and leave more of your nest egg alone. And if you delay your Social Security benefits and boost them in the process, you'll be a bit less reliant on your nest egg to cover your expenses.

There's no right or wrong answer as to what withdrawal rate you should apply to your savings during retirement. But be mindful of the 4% rule's limitations, and make adjustments to account for them. If you expect to need your savings for 30 years, and your nest egg is invested conservatively, you may need to limit yourself to annual withdrawals of 2% rather than 4%.

Another thing: The withdrawal rate you start out with doesn't have to be the one you stick to for decades. Play around with that rate and see what works for you. The more mindful you are, the greater your chances of having your savings last as long as you need them to.