Please ensure Javascript is enabled for purposes of website accessibility
Log In Help Join The Motley Fool
Free Article Join Over 1 Million Premium Members And Get More In-Depth Stock Guidance and Research
By Maurie Backman - Mar 15, 2020 at 8:08AM

Those monthly benefits won't take the place of a robust nest egg.

Many people assume that their living expenses in retirement will be substantially lower than what they looked like during their working years. But that's a dangerous assumption. Other than commuting costs, which disappear once you no longer have a job to go to, most of your expenses will likely stay the same in retirement. Some, like healthcare, many even go up. And even if you manage to pay off your home prior to leaving the workforce, what you save in mortgage costs, you could make up for in additional maintenance and repairs as your homes ages.

That's why it's important to have retirement savings. As a general rule, you should expect to need about 70% to 80% of your former income to live comfortably as a senior. But if you're low on retirement savings and expect Social Security to make up the difference, think again. Those benefits will only replace about 40% of your pre-retirement wages if you're an average earner, which means if you fail to save appropriately during your career, you can't depend on them to bail you out. 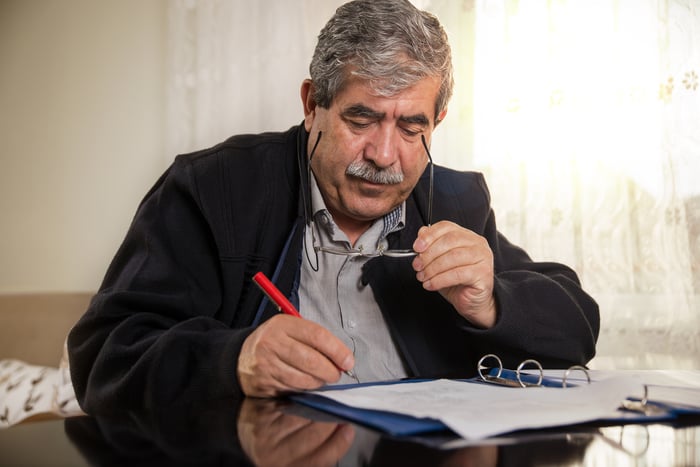 Workers are generally advised to end their careers with roughly 10 times their ending salary socked away in a 401(k) or IRA. Yet recent data from TD Ameritrade reveals that a large number of older workers are glaringly behind. An estimated 28% of Americans aged 60 to 69 have less than $50,000 saved for retirement. Among workers in their 50s, that percentage increases to 37%.

Meanwhile, the average U.S. household income is $87,864. Now to be fair, that figure does account for dual-earning couples who live under the same roof. But even if we cut that figure in half and say that the typical American earns roughly $44,000 a year, that means the average older worker should be retiring with $440,000, so you should have considerably more than $50,000 socked away by the time your 50s arrive.

If you're close to retirement and are sitting on less than $50,000, don't just sit back and assume you'll manage thanks to Social Security. Rather, take action to improve your financial picture.

For one thing, delay retirement as long as possible. Doing so serves a few important purposes. First, it lets you leave your limited savings alone a few more years. Second, it lets you add to your savings to get closer to where you need to be. Third, it could put you in a position to grow your Social Security benefits, thereby eking more money out of them.

In addition to postponing retirement, you'll need to consider adjusting your lifestyle once your career comes to an end. That could mean downsizing to a cheaper home, or even moving to a part of the country where the cost of living is lower on a whole.

Finally, you may need to get on board with the idea of holding down a job in retirement. Working even a few hours a week can help compensate for limited savings.

There's a good chance retirement will cost more than you think, and Social Security will only help you so much. If you're low on savings, push off that milestone as long as possible, and adjust your plans as necessary. It's a better solution than sitting back, doing nothing, and letting yourself wind up cash-strapped.