Please ensure Javascript is enabled for purposes of website accessibility
Log In Help Join The Motley Fool
Free Article Join Over 1 Million Premium Members And Get More In-Depth Stock Guidance and Research
By Dan Caplinger - Mar 16, 2020 at 8:03AM

What just happened in a key market has historically signaled no benefit increases for the following year.

Retirees face the financial struggle every day of having to live without a paycheck. With most people having only modest savings, Social Security is often responsible for most or all of what retirees receive every month. Knowing the importance of Social Security benefits, lawmakers arranged for the size of monthly payments to rise each year to cover the inevitable rising costs of living.

Unfortunately, these cost of living adjustments often aren't big enough to keep up with the particular costs that retirees have to pay. In some years, Social Security recipients didn't get any increase in their benefits at all. And based on what just happened in the financial markets -- and one market in particular -- prospects aren't looking good for those hoping to get a boost to their Social Security benefits at the beginning of 2021.

Every January, Social Security recipients see their payment amounts adjust based on a particular set of inflation figures from the U.S. government. The CPI-W measure of the Consumer Price Index is what the laws governing Social Security look at to determine a given year's COLA. The Social Security Administration looks at the CPI-W figures for July, August, and September, and then takes the three-month average over the period. It then compares that figure to the average over the same three months of the previous year. Whatever the percentage change is becomes the COLA that takes effect at the beginning of the next year. 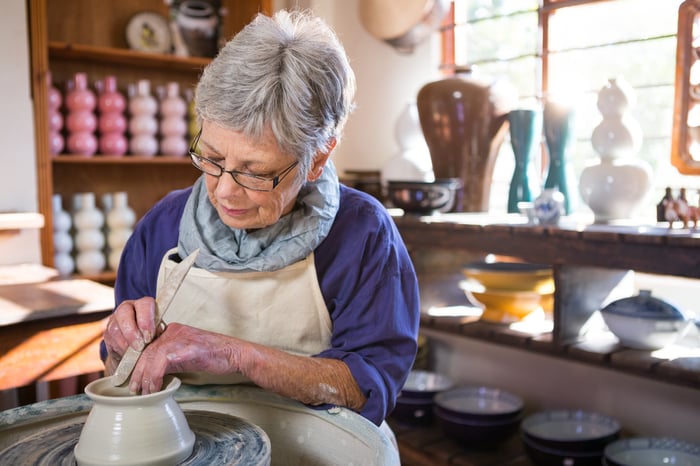 As of February, it looked as though retirees might get at least a modest increase in their Social Security in 2021. With the CPI-W coming in at 251.935, the adjustment if no further inflation occurred between now and this summer would be 0.7%. If prices kept rising at the same rate they have over the past six months, the figure would likely be roughly double that, or 1.4%.

A big price hit is coming

Since the most recent inflation numbers came out, though, something important has happened: Crude oil prices have plunged. Due to a lack of cooperation between Russia and key OPEC nations like Saudi Arabia, oil production has risen dramatically, creating a glut at the same time that the coronavirus has crushed energy demand. Experts expect gasoline prices to drop from around $2.40 per gallon recently to below $2 per gallon in the near future.

We've seen these energy market disruptions before, and they've been tough for seniors relying on Social Security:

To be clear, it's not as though retirees have gotten big windfalls even during normal years. The largest increase in the past decade has been 3.6%, and there've been a lot more readings in the 1.5% to 2% range, including the 1.6% COLA that took effect at the beginning of 2020.

The irony of 0% COLAs

What's particularly unfortunate about the link between energy prices and Social Security COLAs is that the impact of weaker energy markets is larger in the CPI-W than it is for the typical retiree. The price of gasoline affects working-age Americans far more than it does retirees, and the CPI-W's weightings reflect what younger workers have to pay. By contrast, younger people tend to be healthier, leading to smaller healthcare costs than the average retiree.

It's not 100% certain that the Social Security COLA for 2021 will end up disappearing entirely, but history suggests that it's likely. With many retirees facing much lower balances in their retirement accounts as a result of the market's recent drop, not getting a raise from Social Security would just add insult to injury.