Please ensure Javascript is enabled for purposes of website accessibility
Log In Help Join The Motley Fool
Free Article Join Over 1 Million Premium Members And Get More In-Depth Stock Guidance and Research
By Maurie Backman - May 10, 2020 at 7:36AM

A large number of beneficiaries don't anticipate problems with Social Security -- but they may be sorely mistaken.

Millions of seniors today rely on Social Security to pay their bills, and without those benefits, they'd be in serious financial trouble. But Social Security is facing its own share of financial problems, and if those issues aren't resolved, the result could be devastating for seniors.

Interestingly enough, today's seniors have a rather optimistic attitude with regard to Social Security. In a recent survey by the Employee Benefit Research Institute, 68% of retirees said they're confident Social Security will continue to provide benefits of equal value to those being paid out today, and 48% of workers echoed that sentiment.

But Social Security's most recent Trustees Report tells a very different story -- specifically, that benefits may be cut across the board in as little as 15 years. And that's bad news for current and future retirees alike. 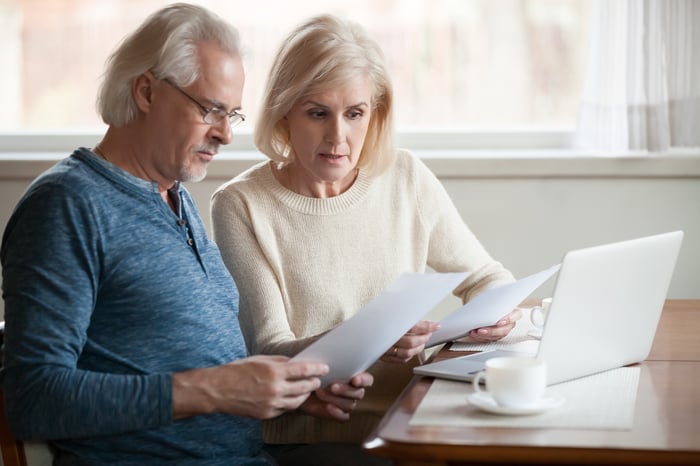 Social Security gets the bulk of its funding from payroll taxes, so as long as there's a workforce, the program can collect money and keep up with its expenses to some degree. But in the coming years, Social Security will owe more in benefits than it collects in revenue for one simple reason: Baby boomers are leaving the workforce faster than new workers are entering it.

Now Social Security does have trust funds it can tap when its expenses exceed its incoming revenue. But according to the program's Trustees, those trust funds are expected to run dry by 2035. At that point, it's estimated that Social Security will only collect enough revenue to pay 79% of scheduled benefits, which means current and future recipients are looking at a 21% cut.

What does that mean? For one thing, current beneficiaries -- particularly those who count on Social Security for the bulk of their retirement income -- may find themselves in a serious financial bind in 15 years. Meanwhile, future beneficiaries may need to make some very hard choices to compensate for lower benefits -- downsizing their homes, extending their careers, and rethinking their retirement plans on a whole.

Of course, a 21% reduction in benefits isn't set in stone. There's lots to be lost by allowing Social Security cuts to happen, and so lawmakers are quite invested in finding a solution to address the program's fiscal woes. But as of right now, no such solution officially exists, and so current and future beneficiaries need to brace for the possibility that they may get less income from Social Security down the line than expected.

That said, those who are still working have one saving grace -- they can ramp up their retirement plan contributions to compensate for lower benefits. Current retirees don't have that option, but they can work on reducing their expenses to squirrel away some savings in case benefit cuts do come to be. Either way, the fact that 68% of retirees and 48% of workers expect Social Security to hold steady is a little troubling -- and perhaps out of touch with reality. Both groups may be better served planning for the worst, even if it doesn't come to be.