Please ensure Javascript is enabled for purposes of website accessibility
Log In Help Join The Motley Fool
Free Article Join Over 1 Million Premium Members And Get More In-Depth Stock Guidance and Research
By Maurie Backman – Jun 15, 2020 at 7:18AM

It's so low, in fact, that near-retirees had better gear up to compensate in other ways.

Baby boomers may be gearing up to leave the workforce in the near term, but they may not be financially prepared to do so. The median savings balance among baby boomers is a mere $144,000, according to a recent Transamerica survey, and while boomers have more money socked away for retirement than millennials and Gen Xers combined (based on median balances), they still have a fair amount of work to do.

The average senior on Social Security today collects roughly $18,000 a year in benefits. Meanwhile, U.S. adults aged 65 and over spend about $46,000 annually, according to the Bureau of Labor Statistics. That leaves a $28,000 shortfall if we go by these averages, and that's where savings coming in. 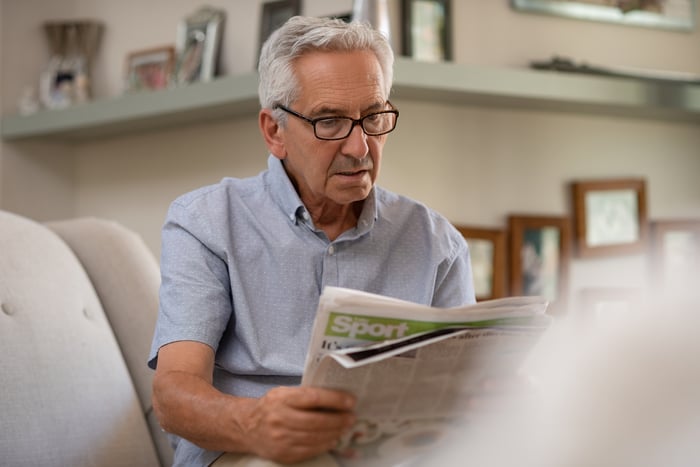 And let's also not forget that retirement plan withdrawals may be subject to taxes. Those who don't save in a Roth IRA or 401(k) get taxed on the money they remove year after year, so if you're looking at an annual withdrawal of $5,760, it may not all be yours to keep.

Making up for insufficient savings

If you're a near-retiree who's sitting on something in the ballpark of $144,000 in savings, you may need to take some critical steps to compensate. For one thing, consider delaying retirement and working longer than planned. Doing so achieves a number of purposes. First, it allows you to leave your limited savings alone for longer. Secondly, it enables you to pad your savings a bit more. Third, it might make it possible to delay your Social Security benefits past full retirement age (which, depending on your year of birth, is either 66, 67, or somewhere in between).

For each year you hold off on filing beyond that point, your benefits increase by 8%, up until age 70, and that boost is permanent. As such, $18,000 a year in benefits could become $22,320 if you delay your filing for three years past full retirement age.

Additionally, you may need to get on board with the idea of working in some capacity during retirement. That doesn't mean you need to hold down a boring desk job or ring up groceries as a cashier, but it does mean you may need to get creative and find a way to generate income without doing work you can't stand. Thankfully, the gig economy makes it possible to pursue income opportunities you might enjoy, whether that means driving for a rideshare company or moonlighting as a caterer.

Finally, you may need to consider downsizing not just your home, but your retirement lifestyle. That could mean moving to a less expensive city or engaging in low-cost hobbies rather than traveling, which can be costly. Of course, the more you're willing to work and earn money, the more leeway you'll have with regard to spending, and if you secure a lucrative enough gig, you may find that you don't have to make too many lifestyle sacrifices at all.

Unlike younger generations, baby boomers weren't told from the start of their careers to save money in a dedicated retirement plan, so it's not shocking to learn that many are behind in that regard. But if you're a near-retiree whose current savings balance is comparable to the number above, you'll need a plan to make up for it. Otherwise, you could risk struggling financially at a time in your life when you deserve much better.