Please ensure Javascript is enabled for purposes of website accessibility
Log In Help Join The Motley Fool
Free Article Join Over 1 Million Premium Members And Get More In-Depth Stock Guidance and Research
By Maurie Backman – Updated Jun 18, 2020 at 9:40AM

Younger Americans have work to do on the retirement savings front. They also have plenty of time to build wealth for the future.

Retirement may not be at the forefront of millennials' minds, what with many of them being saddled with student debt and more focused on saving up funds for a down payment on a home than socking away money in a 401(k) or IRA. But recent data from Transamerica shows that some younger workers may already be far behind on long-term savings.

Millennials have a median savings balance of $23,000 earmarked for the future, and while that's a respectable showing for a 26-year-old who's fairly new to the workforce, let's not forget that older millennials are already in their late 30s. And while that means that retirement is still pretty far away, it also means that they may have some catching up to do. 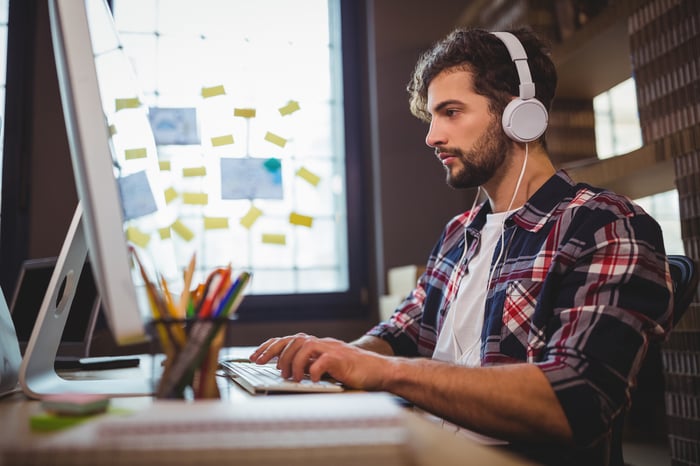 Let's assume you're 37 years old with $23,000 in your IRA. If your goal is to retire in 30 years and you manage to set aside $100 a month over the next three decades, you'll wind up with about $288,000 in total if your investments in that IRA deliver an average annual 7% return for the remainder of your savings window. That return is doable for a stock-heavy portfolio, though it's of course not guaranteed.

Now, $288,000 may seem like a large chunk of retirement cash. But remember, you're not going to withdraw that entire sum at once, since it may need to last for several decades -- possibly 30 years, in fact. Rather, you'll be removing a portion of it each year to help pay your living expenses.

If we use the 4% rule to establish a withdrawal rate, we're left with a yearly income of $11,520. That's not a whole lot of money considering that Social Security only pays the average beneficiary about $18,000 a year at present. Granted, that number could rise over time with inflation-related adjustments, but it could also go down if Social Security is forced to implement benefit cuts, which the program's Trustees already warn is a distinct possibility.

As such, if we go with that $18,000 and add $11,520, we're left with under $30,000 in annual income. That may be enough to support an extremely frugal, modest lifestyle, but it likely won't be enough to buy you the retirement you actually want. Therefore, if you're behind on retirement savings today, it pays to ramp up as soon as possible to avoid a financial shortfall later in life. The good news, however, is that a few simple moves on your part could really make a difference in your efforts to catch up.

1. Save enough to snag your full employer 401(k) match

Many workers give up free retirement money each year by not contributing enough to their 401(k)s to claim their full employer match. If your company matches 401(k) contributions to some degree, aim to put in enough money from your own earnings to snag every dollar you're entitled to.

If your paycheck is largely monopolized by near-term expenses, saving more for retirement could hinge on you getting a side job in addition to your main one. Since that extra income won't be earmarked for bills, you can stick it directly into an IRA.

3. Pick one expense you can live without, and bank your savings

It's hard to deprive ourselves of life's luxuries when we work so hard for them. Rather than slash every non-essential expense in your budget, try identifying one thing you spend money on regularly, and curbing that habit. You can then take the funds you aren't spending and stick them into your retirement plan. And if think a small amount won't make a difference, think again. If you cancel a monthly gym membership worth $45 and save that amount for the next 30 years instead, that alone will give you an extra $51,000 for retirement, assuming that same 7% average annual return in your 401(k) or IRA.

If you're a millennial who's behind on retirement savings, there's no need to panic -- even if you're well into your 30s. At the same time, don't just sit back and expect your 401(k) or IRA to grow itself. A modest effort on your part could make for a very comfortable retirement, so find ways to boost your savings rate and take advantage of the fact that you have many years ahead of you to keep growing wealth.