Please ensure Javascript is enabled for purposes of website accessibility
Log In Help Join The Motley Fool
Free Article Join Over 1 Million Premium Members And Get More In-Depth Stock Guidance and Research
By Maurie Backman – Jun 25, 2020 at 5:06AM

The pandemic isn't just having a near-term effect on Americans' finances; it could also impact a major source of senior income in a very serious way.

Millions of seniors today get a substantial chunk of their retirement income from Social Security, so the idea of those benefits getting cut may be unfathomable to those who rely on them heavily. But unfortunately, once Social Security exhausts its trust funds, a widespread reduction in benefits may be inevitable. And that unwanted milestone could approach sooner than anyone would like, especially in light of the economic crisis spurred by COVID-19.

Social Security gets the bulk of its funding from payroll taxes -- the taxes Americans pay on some or all of their income. Specifically, payroll taxes apply to earnings of up to $137,700. Beyond that point, workers are off the hook.

In the coming years, Social Security expects to collect a lot less payroll tax as baby boomers exit the workforce in short order and not enough replacement workers come in. Furthermore, those same baby boomers will no doubt start drawing their own benefits, thereby putting an additional strain on Social Security's limited resources. 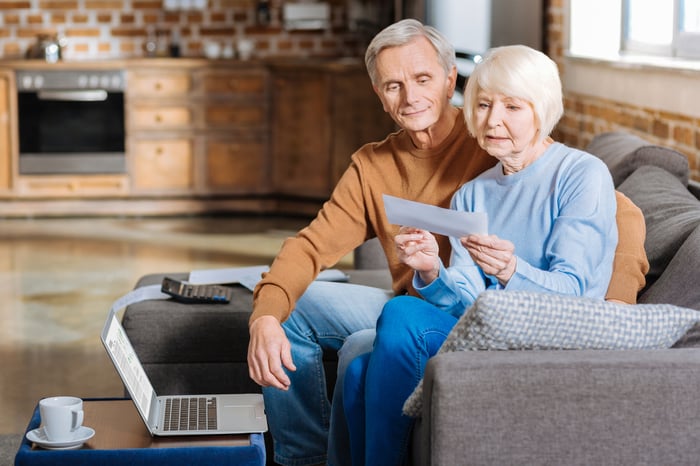 What does all of this have to do with COVID-19? Prior to the outbreak, Social Security's Trustees predicted that the program's trust funds would run out of money by 2035. But in the past three months alone, U.S. unemployment has been through the roof, which means millions of Americans have not been collecting a paycheck and Social Security has not been collecting the payroll taxes it normally would.

The result? The program's trust funds may be depleted sooner than 2035, thereby making benefit cuts possible even sooner.

Social Security pays the average recipient today about $1,500 a month, or $18,000 a year. Meanwhile, benefits may need to be reduced by upward of 20% once the program's trust funds run dry, which means seniors could be looking at a much lower average benefit sooner than they'd like.

Current recipients should gear up for this possibility by rethinking their expenses and cutting back on spending to the greatest degree possible -- though to be fair, seniors who get the bulk of their income from Social Security are, most likely, already living very frugally and may have limited options for reducing their expenses.

Meanwhile, workers who expect to rely on Social Security in retirement can compensate for smaller benefits by boosting their personal savings now. A 55-year-old worker with $100,000 in an IRA could grow that balance to $275,000 by age 67 by contributing $500 a month over the next 12 years -- and that assumes a relatively conservative 5% average annual return on investment in that account.

Though Social Security cuts aren't set in stone -- lawmakers are working to help avoid them -- they're a distinct possibility once the program's trust funds run out of money. And thanks to COVID-19, that milestone may be reached sooner rather than later. Americans should brace for the possibility of lower benefits to avoid financial shocks down the line.