Here's some good news for seniors.

Medicare beneficiaries may be in line for a windfall at a time when Americans of all ages are desperate for financial relief. On Sept. 24, President Trump announced that his administration wants to send out $200 payments to Medicare enrollees to help them cover the cost of prescription drugs. He also said that that money could go out in the not-so-distant future in the form of a payment card.

It's not totally clear how those cards will be paid for. One thought is that the source will be savings from a program the Trump administration has proposed to tie the price of some Medicare-covered drugs to the lower prices available in other countries -- countries where the government has the authority to negotiate with pharmaceutical companies. However it's covered, the extra help would no doubt come in handy for the numerous seniors who struggle to pay their prescription costs. 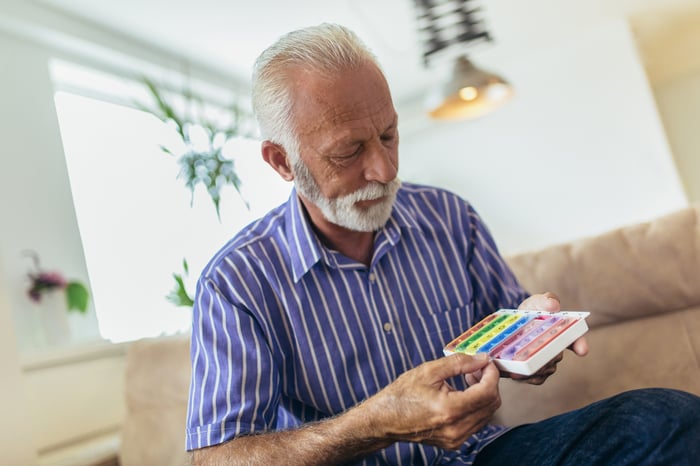 Millions of seniors on Medicare are enrolled in a Part D drug plan, but that doesn't mean their costs are manageable. In fact, Part D participants are commonly tripped up by the fact that plan formularies change from year to year, shifting certain medications into higher, costlier tiers.

Switching plans during fall open enrollment, which participants are allowed to do every year, can help keep drug costs more manageable. The problem, however, is that many seniors don't switch plans, either because they're leery of making changes or don't understand how to compare their plan choices. As such, they get stuck overpaying for prescriptions -- prescriptions they could barely afford to begin with.

In fact, a Gallup poll released last year revealed that an estimated 7.5 million seniors can't afford their prescription drugs. Any amount of money toward medication could thus be a lifeline.

Other ways for seniors to get help

Seniors who struggle with prescription costs have a few options to explore. Plan shopping is a good first bet; savings might be reaped in the course of switching Part D plans, or from leaving original Medicare in favor of comprehensive coverage through Medicare Advantage.

Medicare also has an Extra Help program designed to help low-income seniors afford their medications. The problem, however, is that its income thresholds are set pretty low. In 2020, seniors who are single qualify if their monthly income doesn't exceed $1,615. For couples, that threshold is $2,175. But those with assets could be disqualified regardless of a low income. Also, these limits are only slightly higher than what the average Social Security recipient collects, so seniors with even a small amount of outside income won't benefit from this program. There are also patient assistance programs offered through pharmaceutical companies directly, which have different requirements.

The fact that Medicare enrollees may be in line for a $200 payment is great news, especially since so many have suffered financial losses due to the coronavirus pandemic. But it also pays for Medicare enrollees who are struggling with prescription costs to explore their options during the upcoming open enrollment period, which runs from Oct. 15 through Dec. 7. All changes made during that time will take effect for 2021. Switching plans could end up being a major money-saver.