Three million dollars can buy you a Bugatti Chiron, about a million cups of coffee from Starbucks, or a six-figure retirement income. Owning a car that goes from zero to 60 miles per hour in less than three seconds or having a lifetime supply of coffee sound like nice options, but hopefully you agree that a comfortable retirement is the obvious choice of the three. Read on to learn how you can get to a $3 million savings when you make an average salary of $50,000 a year.

A retirement savings calculator will tell you that to amass $3 million, you need to contribute $1,143 monthly for 40 years straight at a 7% annual return. That contribution level is roughly 27% of your $50,000 salary and probably several times what you can afford to save currently. Thankfully, retirement calculators don't tell you the whole story. You do have options to secure a carefree, financially independent retirement. Here are three to consider. 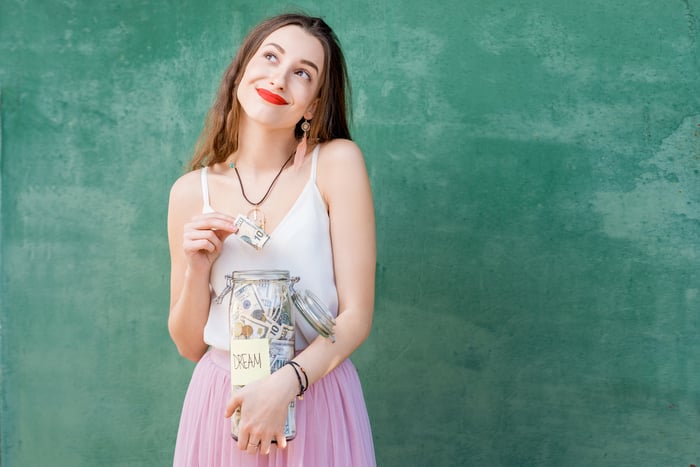 1. Use your employer match

That may not seem like much, but you'll also give up decades of earnings on that $1,400. Over 40 years, those earnings could total about $20,000. The takeaways? Use your employer match, but also stick around long enough to be fully vested.

2. Invest aggressively while you're young

Another strategy available to you in the early years of saving is investing aggressively. To be clear, aggressive does not mean reckless. Don't buy positions you don't understand or try to turn quick profits by trading often. Instead, load up on equity funds rather than fixed income.

Your personal risk tolerance, timeline, and investing expertise should dictate the type and composition of the funds you select. An easy option is a low-cost S&P 500 index fund, which gives you exposure to the largest publicly traded companies in the U.S. You might also consider a smaller position in a fund that's focused on small- or mid-cap companies. The smaller players can grow faster than their larger counterparts, but they're also more volatile. The same goes for emerging markets.

You can't predict today what your future returns will be under any investment strategy. But know that small increases in returns can lead to big changes in your balance over time. As an example, adjusting your return from 7% to 7.5% lowers the total contribution needed to reach $3 million from $1,143 to $984. If you're also earning $145 in matching contributions, that takes your portion down to $839 monthly.

An $839 monthly contribution is 20% of your salary, which is still probably out of reach. But all hope is not lost. You can still reach the $3 million goal by starting with a smaller contribution today. The trick is to bank any part of a raise that exceeds 2% of your salary from this day forward.

Or, rethink the number

If all of this feels way too limiting on your lifestyle today, then target a lower savings balance. If you plan to hold your $50,000-a-year lifestyle steady after you leave the workforce, you probably don't need more than $1.5 million on hand anyway -- or less if you have Social Security or another source of retirement income available. You can reach the $1.5 million benchmark in 40 years by tucking away 10% of your salary consistently and holding on to your employer match.

There are some advantages to chasing an aggressive goal early on, though. The contributions you make in the first 10 or 20 years of your career stand to earn a lot more because they'll be invested longer than contributions made later. Those earnings may not buy you a Bugatti Chiron, but they could set you up for something even better -- financial independence and early retirement.

How to Retire with $3 Million on a $50,000 Salary @themotleyfool #stocks Next Article
Current