Your retirement account balance is up from where it was a few years ago, but you're not sure if it's growing fast enough. Lots of Americans probably feel the same way. According to a recent Federal Reserve Bulletin, the mean retirement savings for working families grew from $213,900 up to $269,600 between 2013 and 2019. That's a gain of $55,700 over the course of seven years, which works out to a compound annual growth rate (CAGR) of less than 4%.

The Fed's data is presented in 2019 dollars, which means the 4% growth is after inflation. But what's interesting is that in those same years, the S&P 500 showed an inflation-adjusted CAGR of nearly 13%. Had these retirement savers mimicked that growth, the mean savings across in 2019 would be just a shade over $500,000 rather than $269,600. And that's without adding another dime in contributions to those retirement accounts. 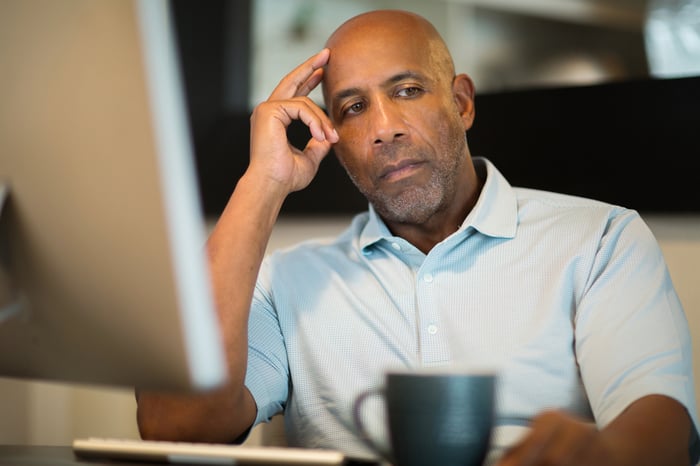 So where's the disconnect? Why didn't these retirement savers achieve higher growth given the market's strength? Read on for three explanations, and decide if any of them apply to you.

Let's start with the most positive interpretation. The people included in this study range from those in their peak earning years to those who are very close to retirement. Anyone nearing retirement age should be intentionally conservative with retirement investments. If you are 60 years old, targeting retirement at 65, you don't want to be fully invested in an S&P 500 index fund. It's simply too volatile.

As we saw back in March, the S&P 500 or any other broad-based equities index can lose a lot of its value very quickly. Sometimes those losses are recouped in months, as they were in 2020. But sometimes it takes years, as happened after the Great Recession. When you're on the verge of retirement, you don't have years to wait. You're better off investing in a more conservative mix of equities, fixed income, and cash.

And yes, you'll underperform the market that way. But you'll be generally more confident about your retirement timeline no matter what happens with share prices.

It's also likely that a good number of these retirement savers may have accidentally underperformed the market. This could happen if you enrolled in your 401(k) but never set your investment selections. In that case, your savings contributions aren't being invested -- they're sitting quietly in your account in cash. Or maybe you did pick your investments, but you chose very conservative options out of precaution.

Either way, this is a fixable situation. First, a simple math problem: Subtract your age from 110. The answer is a guideline for the percentage of stocks you should hold in your portfolio, according to your age. If you're 40, for example, the rule recommends a portfolio of 70% stock and 30% fixed income. Use that as a starting point and adjust the percentages based on your situation. You'd hold less stock if you are risk-averse, for example. Know that increasing your stock percentage raises your risk. Most people won't want to do that unless they have a sizable pension or other retirement income stream already locked down.

To fulfill your targeted stock percentage, lean on broad-based, large-cap index funds. An S&P 500 index fund, for example, naturally tracks with the market. Small- and mid-cap funds can show steeper growth, but that comes with higher volatility. So use these sparingly until you fully understand their behavior.

Lastly, some of these retirement savers may have taken money out of their retirement savings early. That's harder to overcome. Say you pull $50,000 from your 401(k) and don't pay it back. Your account balance immediately drops by $50,000, but that's not where you'll see the biggest hit. If that money was invested at 6% annual growth, you're giving up about $110,000 in earnings over the next 20 years.

The road to recovery here has two steps. First, make sure you're invested appropriately for growth. And second, get serious about your contributions. Save as much as you can afford now and plan on increasing your contribution rate at least once annually.

Look forward, not back

Commit to a monthly contribution; stretch for 10% or more of your income if you can. Set up your investment choices based on the rule of 110. And keep some cash on the side so you won't have to reach into your retirement account if an emergency crops up.