You're probably aware that saving for retirement is crucial, and if you didn't know that, here's a gentle but necessary wake-up call. Social Security will only replace about 40% of your pre-retirement income if you're an average earner, and most seniors need roughly twice that amount to maintain a comfortable lifestyle. If you want to avoid money problems during retirement, then saving independently is your ticket to it.

Now, if you're already in the habit of funding a 401(k) or IRA, you might be curious to know how your balance compares with that of the average saver. And to that end, Fidelity has some answers.

Last year, retirement accounts took a serious hit when the coronavirus outbreak first struck. The stock market plummeted in March of 2020, leaving many older workers to worry whether their retirement plans would be compromised. 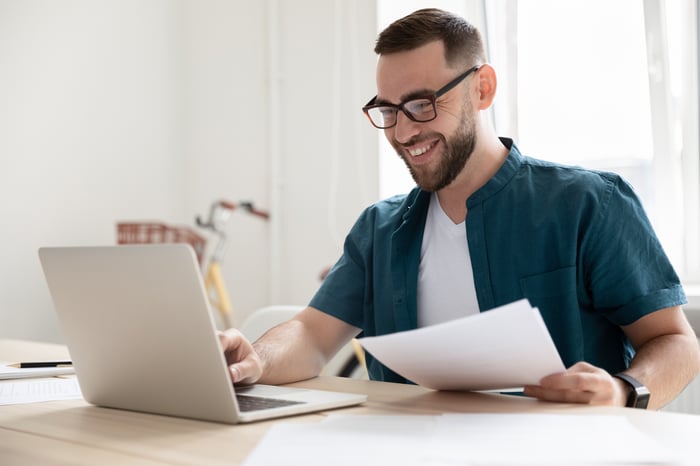 Thankfully, that didn't happen, namely because the stock market staged an incredibly speedy recovery. And now, retirement plan balances have not only recovered from last year's downturn, but have also increased to surpass the highs they reached before the pandemic kicked in.

In addition to rising plan balances, there are now a record number of retirement savers with $1 million or more in a 401(k) or IRA. And that's coming off a year that was not only volatile from a stock market perspective, but also ridden with general economic uncertainty.

How to boost your retirement plan

If you're in your 30s or 40s with a 401(k) or IRA balance comparable to that of the average American, then you may be in pretty decent shape, since you still have a lot of time to build on that balance and grow it into an even larger sum. But if you're in your 50s with $123,900 to $130,000 in retirement savings, you might need to ramp up your contributions.

Similarly, if you're younger but don't have anywhere close to the average 401(k) or IRA balance, then you might need to rethink the way you spend. In either scenario, setting up a budget will help you get a better handle on your money and make it easier to carve out more room for savings.

Putting the process on autopilot will also help, because that way, you'll be funding your retirement plan before you even get a chance to touch your paycheck. Employer-sponsored 401(k)s have the upper hand in this regard, since contributions are deducted automatically on the payroll side. But there are some IRAs that offer an automatic savings feature as well, and if you sign up for one of them, you'll get the same benefit: Your money will land in your retirement plan before you get a chance to touch it.

Of course, at this point, a lot of people are still recovering from the financial impact of the pandemic. If you're one of them and you can't focus on long-term savings right away, that's OK. But once you're in a better place financially, you can work on boosting your contributions to grow your retirement plan's balance and help ensure that you have enough money later in life.

Remember: Comparing yourself to others isn't always productive, and if your retirement savings don't mimic the average, there's no need to get down. What you should do, however, is pledge to ramp up your savings if you're not happy with your current balance so that you don't have to worry about covering the bills once you're ready to leave your career behind.