This effective strategy could help you grow your nest egg in a very big way.

Retiring on Social Security alone could leave you really cash-strapped. That's because those benefits will only replace about 40% of your pre-retirement wages if you're an average earner, and most seniors need about twice that sum to keep up with their expenses.

In fact, you'll often hear that it's important to save in an IRA or 401(k) consistently throughout your career. Doing so could help ensure that you have enough money to pay your bills later in life. And if you stick to this strategy, you can actually build a massive pile of wealth for retirement without having to give up too much of your earnings along the way. 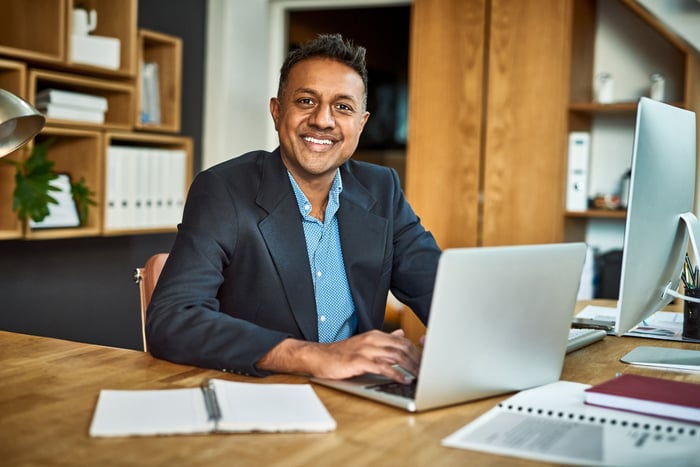 If you're an average wage-earner, parting with a quarter of your paycheck to max out your 401(k) contributions may not be feasible. But here's the good news. If you fund a retirement plan for many years and invest your savings wisely, you can turn a series of modest contributions into a very impressive sum. In fact, with the right strategy, you could end up with five times the amount of money you put into your IRA or 401(k).

How is that possible? It boils down to three things:

Now, let's imagine you start funding your retirement plan at the age of 27 with the goal of retiring at 67. That's full retirement age for Social Security purposes.

Let's also imagine you contribute $300 a month, every month, to your retirement plan during that time. That's a total contribution of $144,000 over 40 years.

Want to know how much money you'll have at the end of your savings window? The answer is a cool $719,000, which is about five times the amount you'll end up having contributed out of your earnings.

Let your money work for you

You may be hesitant to invest your retirement savings in stocks. And to be clear, there is some risk involved. But if you're unwilling to take that risk, you could end up with much lower returns in your retirement plan, and a much lower ending balance to go along with it.

The stock market has a solid history of rewarding investors who stick with it for the long haul. And so if you go heavy on stocks, even if there are years when the market crashes, you're still not taking an unreasonable risk because you're saving for a milestone -- retirement -- that's many years in the future.

Of course, it's not a bad idea to shift your IRA or 401(k) investments toward bonds as retirement gets really close. But if you go big on stocks for the bulk of your savings window, you might could end up getting rewarded in a really big way.

Want More Out of Social Security? Taking Advantage of This Trend Could Be Your Ticket to It
401%