Here at the Fool, we've written extensively about the importance of saving for retirement early and often, as the power of compound returns can do wonders over the course of several decades. Now, we think it could be even more interesting to see what our experts have done with their own money. So we asked four of our personal finance analysts to share their own stories about when they started saving for retirement so you can learn from their successes (and mistakes).

Dan Caplinger
There's no wake-up call more alarming than starting your first real job, and that's what really motivated me to start saving for retirement. At age 26, the prospect of spending 30 years in a law office seemed like hell on Earth, and in my mind, the more money I set aside, the sooner I could buy my financial freedom.

Over time, I've discovered that being on the path to early retirement has enabled me to consider opportunities I otherwise would have had to reject. That in turn has allowed me take on work that is far more fulfilling, and therefore I haven't been as obsessed with early retirement as I was earlier in my career. Nevertheless, as my nest egg has grown, I've become more conservative in my investing while remaining on target to reach my goals, and gaining investing experience has increased by confidence in the focused portfolio I've chosen. If you want to put yourself in the best position to live your life as you see fit, saving as early as possible is a great way to gain the leverage you need and to find the courage to take the path that most people can't.

Brian Stoffel
I'll never forget when my dad showed me a chart illustrating the power of time in saving for retirement. I was 16 at the time, and the chart looked something like this: 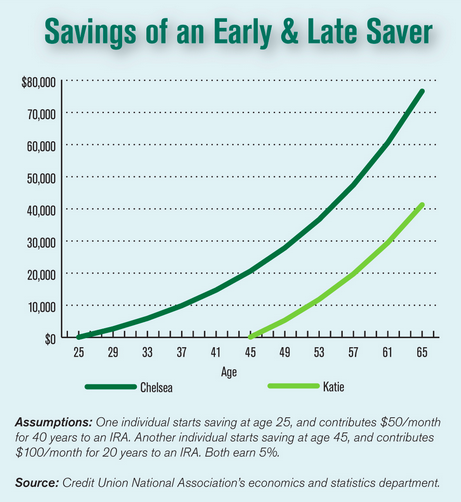 The numbers weren't so important as the overall visual. The earlier I started saving, the better off I would be.

So when I got my first job as a middle school teacher, I knew I'd be putting money away for retirement. At the beginning of the year, we had to fill out 401(k) forms, and I chose to have 10% of my salary deducted from each paycheck. Unbeknownst to my 23-year-old self, my school was matching 6% of my salary as well. I maintained that allocation for all five years I was with my school -- meaning I was automatically saving 16% of my salary every year.

When I left teaching to join The Motley Fool, this gave me a great base to start investing with -- once I rolled over my funds. Out of pure luck, I began my own investing journey in 2009 and thus benefited from the current bull market.

Over time, my approach has changed somewhat. Since starting a family and changing jobs, my wife and I generally have less spare money to invest with than we did in our teaching days. But we make absolutely sure to max out our IRAs every year while saving what's left over toward a down payment on a house.

Matt Frankel
I've had a strong interest in the stock market my entire adult life, and I started investing while I was still in college. However, my earlier investments were of a speculative nature, and in retrospect they were more of a learning experience than anything else.

I made my first retirement investment at the age of 26, when I got my first "real" job after finishing my master's degree. As a public high school teacher, one of the perks was a pretty good state retirement plan, to which I didn't have to contribute a dime. My employer contributed 7% of my salary, and it was fun to watch that add up over the next few years.

However, I've always liked to play a more active role in my finances, and since my state retirement plan wasn't costing me anything, I opened an IRA to stash some extra money. I spent the next few years learning how to value stocks, assess risk, and construct a solid retirement portfolio.

Staying disciplined has been tough at times. For example, the year my wife and I bought our first home, not much of my money made its way into savings, and the same can be said of the year we got married (for those who don't know, weddings are pricey!). However, for the most part, I've maxed out my IRA contributions every year since opening my account, and I plan to do so for the foreseeable future.

Jason Hall
I started contributing to my first 401(k) when I was 20 and still in college, but like many dumb youngsters, I cashed it out when I left that job. It was "only" $1,600 or so, so I figured that would be easy to make up later.

Of course, like any stupid mistake, it's worth making twice, right? I cashed out from a second employer in 2003, and I can promise you I didn't do anything constructive with that money, either. Between both cash-outs, I took around $6,500.

I got back to investing until 2007 -- at age 30 -- when I realized I was well behind the curve. I kicked up my 401(k) contributions to the max, joined The Motley Fool, and began to really learn about investing. I'm now knocking on 39, and my retirement account balances are higher than the median for my age. I was able to catch up primarily by saving as much as possible every year and mostly letting the stocks and funds do the hard work.

How's that for an expensive lesson on compound returns?

When Did You Start Saving for Retirement? @themotleyfool #stocks Next Article
Current