Please ensure Javascript is enabled for purposes of website accessibility
Log In Help Join The Motley Fool
Free Article Join Over 1 Million Premium Members And Get More In-Depth Stock Guidance and Research
By Selena Maranjian – May 18, 2015 at 5:17PM

The RMD table will tell you how much you need to withdraw from retirement accounts each year.

Retirement accounts have lots of rules. For example, you can only contribute specified amounts per year, and you have to meet requirements to qualify for certain tax breaks. A big rule to know about is that with some retirement accounts, you have to start taking required minimum distributions, or RMDs, once you hit age 70 1/2. An RMD table can help you figure out just what your RMD is.

The ABCs of RMDs
If you have your retirement money parked in a Roth IRA and not in a traditional one or a 401(k), you don't have to worry about RMDs.

With a Roth IRA, you can leave the money in it to grow (tax-free!) over your entire lifetime, and funds from it don't have to start getting withdrawn until you die. But with a traditional IRA or a 401(k) -- both the traditional 401(k) and the newer Roth 401(k) -- you must start taking money out beginning at age 70 1/2. And you can't just withdraw any sum you want. The IRS has rules about these withdrawals, which feature required minimum distributions.

Each year, you must withdraw at least your RMD, so greater sums are permitted. The RMD is calculated based on life expectancies and the balance in your account at the end of the previous year. Your IRA or 401(k) custodian (often the financial institution where your account lives) will likely inform you of your RMD, while also reporting it to the IRS.

But if you're not informed what your RMD is, you can consult the IRS's helpful RMD table and figure it out on your own. You'll find an RMD table or RMD calculators at many financial websites, too. 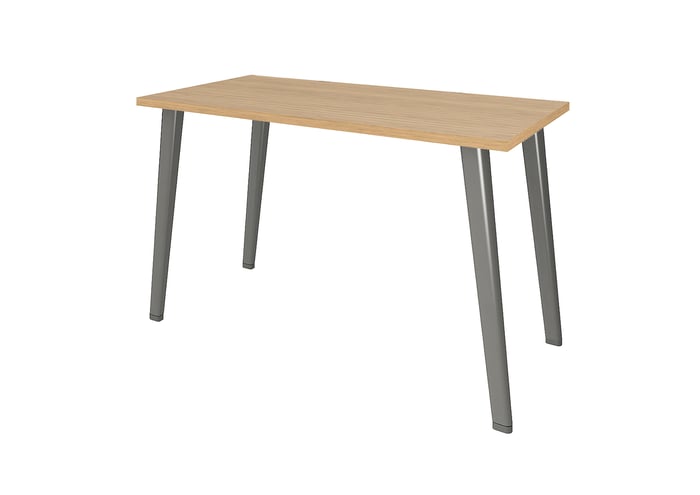 An RMD table is almost as easy to use as this table. Photo: Turnstone Furniture, Flickr.

The RMD table
Click here for an RMD table from the IRS (in .pdf form) that's part of an easy-to-use worksheet. It's for those who don't have a spouse who is the sole beneficiary of their IRA and who isn't more than 10 years younger than them.

If you're figuring out how much you must withdraw this year, you'll start with your retirement account's total value on the last day of last year. So for distributions taken by December 31, 2015, you'll start with the December 31 total from 2014. Let's say that your account conveniently had $100,000 in it at that point.

Next you find the "distribution period" for your age on your birthday this year. So if you turn (or turned) 75 in 2015, you'll look up age 75 on the RMD table and you'll see that the distribution period is 22.9.

Note that the table shows the distribution periods getting much smaller as you age. If you make it to age 90, for example, the distribution period is 11.4, and it's just 6.3 at age 100. It might look like you're taking smaller portions of your account as you age, but you're actually taking out greater ones, as your money is presumed to not need to last as long anymore, as you get older.

RMD rules
If you don't follow the rules for required minimum distributions, you can end up in trouble. If you withdraw less than you needed to or make the withdrawal later than the deadline, you might have to pay an excise tax of 50% of the amount you failed to withdraw. In that case, you'll need to fill out IRS Form 5329 and include it with your federal tax return for the year in which you took less than you were supposed to. You can also include an explanation of what happened, as per the IRS, "the penalty may be waived if the account owner establishes that the shortfall in distributions was due to reasonable error and that reasonable steps are being taken to remedy the shortfall."

Here are some of the other rules to know.

For every year in which you must take an RMD, it must be taken by Dec. 31 -- except for your first year. For the year in which you turn 70 1/2, you have until April 1 (not April 15) of the year following that year. In other words, if you turn 70 1/2 in 2015, you have until April 1, 2016, to make your first RMD. For the year 2016, you have until Dec. 31. Note, though, that if you use the allowed delay in your first year, you will be taking two distributions in the same year, which might boost your taxable income and bump you into a higher tax bracket. Proceed with caution – and a calculator.

There are other rules to know, too, so when your RMD time is approaching, do a little more research to determine what's required of you. For example, with 401(k) plans, RMDs generally start when you turn 70 1/2 or when you retire, if that's later. And those who own 5% or more of a company sponsoring their retirement plan have special rules, too. Any particular retirement plan might have some particular rules about RMDs from it.

Your RMDs will usually be taxable as ordinary income for the year in which they're taken, and they may be subject to state or local taxes, too. As the IRS explains, "Your withdrawals will be included in your taxable income except for any part that was taxed before (your basis) or that can be received tax-free (such as qualified distributions from designated Roth accounts)."

Be strategic
Finally, note that it's good to be strategic about your RMDs. If you have multiple IRAs or 401(k)s, you have choices to make. With IRAs, you must determine your RMD for each of them, but then you can withdraw that total sum from just one or several of them, if you wish. (Those with multiple 401(k) accounts must take each account's RMD from each account.) For example, if you have three IRAs, and your RMDs from them are $2,000, $3,000, and $5,000, for a total of $9,000, you can withdraw those sums from their respective accounts or you can withdraw a total of $9,000 from any or several of them. In this situation, consider withdrawing from your IRA that's performing worst or that's generating the least in dividend and interest income.

If your income is lower than usual in a given year, you might opt to withdraw more than the RMD in your accounts. If you expect to have a significantly higher income in the coming years, enough to push you into a higher tax bracket, it might be worth taking more than the RMD, too, while you're still in a lower bracket.

In short, knowing the rules regarding RMDs and consulting an RMD table when you need to can help you make the most of your retirement investments.