The Patient Protection and Affordable Care Act, better known as Obamacare, is the subject of endless scrutiny, as proponents and naysayers alike look at the progress of the legislation to see how well it does in achieving its stated goals of providing healthcare coverage for all. One key component in evaluating the success of Obamacare is whether healthcare coverage remains affordable, and as a result, many analysts pore over figures showing the path of premium costs from year to year.

Earlier this week, the Kaiser Family Foundation released its latest look at Obamacare premiums in 13 major cities across the nation, and as you'd expect, the analysis showed some winners and losers going into 2016. Let's take a closer look at what the study found and whether you can expect higher Obamacare premiums in your area.

Obamacare premiums start to pick up
Overall, the outlook for Obamacare premiums in 2016 doesn't look as favorable as it did this year. For 2016, the average premium paid across the major cities that the Kaiser Family Foundation looked at is anticipated to rise by 3.1%. That's not a huge amount, but it's far worse than the 1.3% drop in Obamacare premiums that participants enjoyed in 2015.

In particular, the study started by focusing on a key benchmark under Obamacare: the price of the second-least expensive healthcare plan in the silver tier. In four of the 13 cities, including Hartford, Detroit, Los Angeles, and Seattle, Obamacare premiums are slated to drop from year-ago levels, with Seattle enjoying a second consecutive decline in the 10% range. Among the nine cities where premiums will increase, four -- New York, Providence, Washington, D.C., and Portland, Maine -- will see rises of less than 3%. Only two cities -- Albuquerque and Portland, Ore. -- will see double-digit increases in Obamacare premiums for 2016. 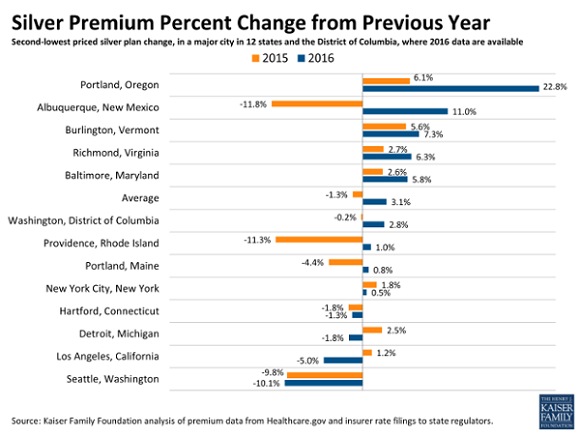 Other measures of Obamacare premiums, however, aren't quite as sanguine as this key benchmark. When you turn to the lowest-cost silver plan, the average premium is slated to rise by 4.2%. Five cities -- Albuquerque, Baltimore, Burlington, Richmond, and Portland, Ore. -- will see increases of more than 7.5%, and while a few of these figures are still preliminary and could change in the future, they still indicate an ongoing upward track for premium costs that is modest but significant for many families.

Will taxpayers pick up the tab?
One interesting aspect of the Kaiser study is that it didn't just look at the amounts that Obamacare participants are paying for coverage. It also examined the premium tax credit on out-of-pocket costs for those who qualify for subsidized coverage, using the example of a 40-year-old non-smoker who earns $30,000 a year.

Despite the wide range of changes in premiums, the out-of-pocket cost for the second-lowest-cost silver plan after taking the tax credit into account was almost exactly the same in 12 of the 13 cities that Kaiser looked at. A tiny 0.2% increase kept the rounded figure at $208 everywhere but Albuquerque, where a lower cost of $190 was still 11% higher than the $171 amount from 2015. Overall, that pushed the average up 1% on a subsidized basis. For the lowest-cost silver plan, a higher 2.5% increase applied, with subsidies having a more disparate impact in several places. Los Angeles and Albuquerque saw double-digit percentage increases, with Seattle also posting a sizable 8% rise. Meanwhile, Portland, Ore., saw a nearly 10% drop in premiums after taking the tax credit into account. These figures indicate that with after-credit amounts rising less than pre-credit premiums, taxpayers could end up subsidizing a larger portion of coverage for participants in 2016 than in 2015. That in turn could have a sizable impact on the total cost of the program, including what the government remains responsible for paying.

Be smart about your Obamacare coverage
Perhaps the most important thing that the Kaiser study shows is that it's important to look at all of your Obamacare options in figuring out which makes the most sense for you. With a wide range of plans not just in the silver tier but also in both cheaper and more expensive coverage classes, changes in premiums won't be uniform across the Obamacare playing field. By taking the time to check on all of your healthcare coverage options, you can ensure that you make the most of what the Affordable Care Act offers you and hopefully keep any premium increases to a minimum.