Please ensure Javascript is enabled for purposes of website accessibility
Log In Help Join The Motley Fool
Free Article Join Over 1 Million Premium Members And Get More In-Depth Stock Guidance and Research
By Dan Caplinger – Nov 9, 2015 at 7:00AM

A surprising trend has taken shape in the credit world.

Credit cards have become ubiquitous part of daily life. The top two card companies, Visa (V 2.25%) and MasterCard (MA 2.16%), each have more than 2 billion cards outstanding worldwide, and the marketing drive among financial institutions to get customers to carry more credit cards has only accelerated since the financial crisis. Yet an interesting thing has happened with the number of credit cards that the average American carries. Over the past decade, that figure has shrunk, with the most recent 2014 reading from the polling service Gallup finding the current average to be the lowest it has ever recorded. Let's look more closely at the results that Gallup found and what they mean for you.

2.6 credit cards for the average American
When Gallup looked at the nation's population as a whole, it found that Americans have an average of 2.6 credit cards. That figure includes not only major network credit cards from Visa and MasterCard but also specialized cards like department stores and retailers.

Having 2.6 credit cards might seem like more than enough for many people. Yet to make that figure a true average of the entire American public, the Gallup poll included those who don't have any credit cards in that number. When you take out those who choose not to have credit cards at all, the average among those who do have cards in their wallets jumps all the way to 3.7 credit cards. 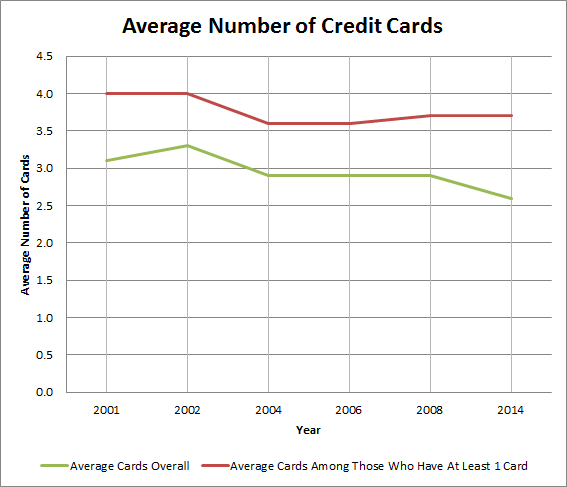 Interestingly, as you can see above, the 3.7-card figure hasn't changed all that much over time, having stayed in a fairly tight range of 3.6 to 4.0 since the turn of the millennium. What has changed, though, is the overall average, and that's a function of the fact that a record high percentage of people have bowed out of the credit card game entirely. 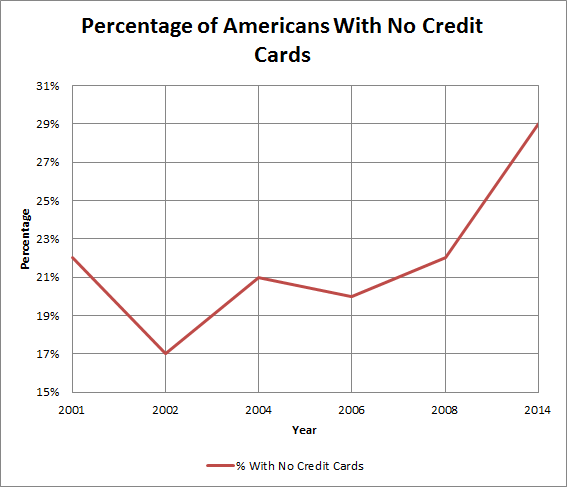 Why are Americans cutting back on credit?
The Gallup poll took a closer look at credit behavior to dig deeper into this phenomenon. What it found was fascinating:

Moreover, the math behind averages hides to some extent just how many people make do with a small number of cards. Throughout the history of the Gallup poll, the largest group of Americans reported that they have one or two cards. About one in three Americans currently say they're in that category, compared to 18% with three or four cards, 9% with five or six, and 7% with seven or more cards.

For the most part, people using credit cards fall into two categories: those who need the payment flexibility of cards in letting them repay balances over time, and those who take advantage of them for rewards or for convenience. For those who need cards regularly to make ends meet, the number of cards they have is far less important than the amount of their credit lines. A single card with an adequate line of credit can be all that someone needs, especially if the interest rate is favorable.

By contrast, those who take advantage of credit cards for rewards find that having multiple cards is sometimes necessary to maximize their benefits. Some cards offer generous cashback offers on particular categories like gasoline or groceries, while others might have better overall rewards for general spending. Still others rotate their categories regularly, giving cardholders an incentive to have different types of cards that hopefully don't have too much overlap. Combine that with the ability to earn introductory offers like 0% interest or cash rebates for spending certain amounts, and it's easy to understand how the number of cards someone has can multiply even if the person doesn't actually use all those cards very often.

Be smart with your credit
How many cards you need depends on which of these categories you fall into. If you take maximum advantage of their features, then having multiple credit cards can be a tool to boost the rewards on what you would spend anyway.

If you have more challenging finances, then having more cards is more likely just to put you into a deeper hole that will gradually get harder to break free. The discipline from having just one or two cards -- or even no cards at all -- can help you get rid of the debt that's holding you back from financial freedom. The fact that more Americans have fewer cards is a positive sign of less overall reliance on debt, and that's healthy for the personal finances of the nation as a whole.

Dan Caplinger has no position in any stocks mentioned. The Motley Fool owns shares of and recommends MasterCard and Visa. Try any of our Foolish newsletter services free for 30 days. We Fools may not all hold the same opinions, but we all believe that considering a diverse range of insights makes us better investors. The Motley Fool has a disclosure policy.