Please ensure Javascript is enabled for purposes of website accessibility
Log In Help Join The Motley Fool
Free Article Join Over 1 Million Premium Members And Get More In-Depth Stock Guidance and Research
By Helen Simon - Jan 3, 2016 at 5:04AM

If you're itching to make a post-retirement move, here are five great options.

As the ideal retirement lifestyle becomes more difficult to attain, increasing numbers of Americans are deciding to retire abroad. In many countries, retirees can enjoy a high standard of living for a fraction of the cost of a similar lifestyle in the U.S. That, along with the change in scenery, has made retiring abroad an appealing option

There are many countries where retirees can live large on a small budget, but five nations have been especially popular among American retirees for financial reasons: Ecuador, Panama, Costa Rica, Portugal, and Malaysia.

For perspective, here's a quick glimpse of the cost of renting in each of these countries compared to the U.S.: 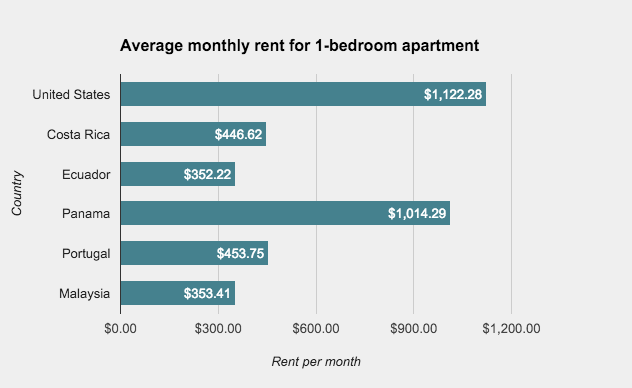 Figures represent the average rent per month for a one-bedroom apartment in a city center. Source: Numbeo.

Let's take a closer look at why American retirees should consider making these countries their permanent (or at least seasonal) home.

Ecuador
This South American country has been attracting so many American retirees that American expat communities have begun to pop up in cities like Cuenca, Quito, Vilcabamba, and Loja. Many Americans have been happy with the standard of living Ecuador offers, considering the day-to-day living costs are significantly lower than what we see in the U.S. For instance, the average rent for a one-bedroom apartment in Ecuador is $350 per month compared to $1,123 in the U.S. Meanwhile, in Ecuador you can eat out for $3 to $5 -- or you can drop $10 per person if you want to splurge on a three-course meal.

On top of these everyday savings, Ecuadorian property taxes are predominantly much lower, and just for being age 65 and older, retirees may qualify for discounts on property taxes. There's no currency conversion necessary, as Ecuador uses the U.S. dollar. As an expat, you can also participate Ecuador's national healthcare plan, which has a reputation for delivering high-quality care at a reasonable cost relative to the rest of the world. Average monthly premiums for health insurance fall around $70.

Panama
Panama has long been known as an inexpensive destination for U.S. tourists and retirees. While luxury purchases such as big-name brands and club memberships might cost more in Panama than in the United States, basic living expenses such as meals, public transportation, and utilities will come significantly cheaper. For example, the average monthly fee for a fitness club membership is roughly $40 in the United States but $65 in Panama. On the flip side, a meal at an inexpensive restaurant costs an average of just $6 -- just half the average in the United States.

The healthcare in Panama is up to the standards we see in most developed Western countries. However, the cost and quality of care can vary depending on the region of the country you are in. For instance, the Punta Pacifica of Panama City, which is affiliated with the Johns Hopkins University, offers the sort of quality facilities you would find in the U.S. In more rural areas of the country, like Ngobe Bugle or Kuna Yala, the administration of general health services is of a lower quality. The average monthly healthcare premium for an individual living in the United States is in the ballpark of $235; in Panama it averages roughly $55 (and you have the option of purchasing better, more expensive healthcare as well).

On top of that, Panama's Pensionado retirement program allows U.S. pensioners and Social Security recipients with a minimum income of $1,000/month to receive discounts on various products and services in order to encourage them to relocate there. Discounts can apply to airline tickets, public transportation, hotel bills, utility bills, movies, concerts, some hospital bills, and more. Note that there is no maximum income limit to participate in the Pensionado program. Although this program may not be a deal-maker, it's worth considering. And just like Ecuador, Panama uses the U.S. dollar as its official currency.

Costa Rica
With its political and economic stability and its low property taxes, Costa Rica has drawn a large American expat community -- large enough that some casually refer to Costa Rica as a U.S. colony. The country is known for having one of the best healthcare systems in Latin America, and as in other Central American countries, healthcare-related costs are generally much lower compared to American costs. Average monthly premiums paid for health insurance coverage in Costa Rica fall between $60 and $130 a month.

Because of the influx of American expats, Costa Rica has become one of the more expensive countries in Central America to live in. Nevertheless, the overall cost of living is much lower than that which most Americans are used to. For instance, our $12 meal in the U.S. would cost roughly $7 in Costa Rica. The monthly rent for a one-bedroom apartment in Costa Rica would set you back roughly $450, whereas the same apartment would cost you $1,123 a month in the U.S. If you were looking to purchase an apartment, the price per square foot in Costa Rica would come to about $130 versus $213 in the U.S.

Malaysia
This Southeast Asian country's real-estate market offers quality housing at a reduced cost due to a lack of demand from within the country. The cost per square foot for an apartment averages out to $174 per square foot compared to $213 per square foot in the U.S. Further, the Malaysian healthcare system is internationally recognized for care administered, and insurance premiums average about $50 a month.

The Malaysian government makes it easier than most Asian countries for foreigners to obtain residency. The Malaysia My Second Home Program (MM2H) is a residency program that offers certain tax advantages for expats. Under MM2H status, all foreign-sourced income is exempt from Malaysian taxes, so your pensions and Social Security would not have any Malaysian taxes levied against them. However, there is a minimum income requirement of $3,200 per month for retirees to qualify for the MM2H resident status.

Malaysia's official currency is the Ringgit, so you'll have to convert your dollars. However, on the upside, most Malay citizens speak English, which obviously makes it easier for Americans to acclimate to the culture.

Portugal
Portugal's economy took a big hit during the European debt crisis that started in 2008. However, the country has maintained its quality infrastructure despite its financial woes. The World Economic Forum ranked Portugal No. 12 in the world for quality of infrastructure for 2010-2011 and No. 11 in the world for 2012-2013 -- ahead of the U.S. in both periods. A strong infrastructure has been shown to have a positive effect on both economic development and quality of life, something every retiree wants in their retirement location.

When it comes to basic expenses, our $12 meal in the U.S. would cost $7.65 in Portgual. Basic utilities for a 915-square-foot apartment in Lisbon cost an average of $100 per month versus $150 in the U.S. A relatively low cost of living, reasonable housing costs, and high-quality healthcare make living in Portugal look like a bargain to many American expats.

Keep your options open
When you're deciding where to live out your golden years, remember that Florida and Arizona aren't your only options. Expand your search to the entire globe, and you might find your dream home where you least expected to.