A picture may be worth a thousand words, but numbers are powerful, too. Sometimes it just takes a number or two to deliver a life-changing realization. Here are nine sets of investing numbers and statistics that should make a big impression on you. 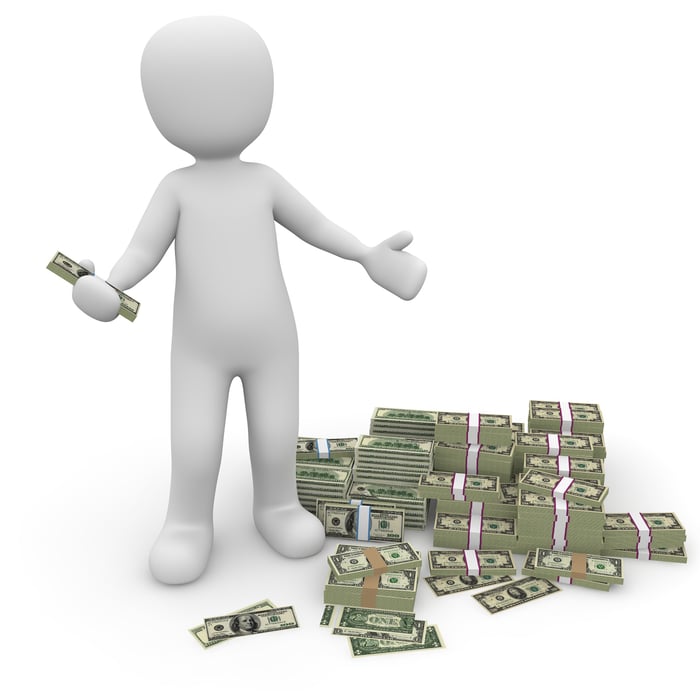 You can probably amass much more money than you think.
If you have 30 years until retirement and you can sock away $8,000 per year that grows by an annual average of 8%, you can accumulate close to $1 million! (Obviously, if you save more or average a higher return it can be even more.) If you have only 20 years until retirement and can sock away $10,000 per year growing at 8% annually, you'll end up with close to $500,000. Even if you have only 10 years until you hope to retire, if you can sock away $10,000 per year and it grows at 8%, you'll end up with more than $156,000. It may not seem like much, but it can deliver around $6,000 or more per year in income if you withdraw 4% annually and it keeps growing.

It's kind of easy to outperform most managed stock mutual funds.
An inexpensive, broad-market index fund is likely to outperform most managed stock mutual funds. For example, the S&P 500 outperformed about 80% of large-cap stock funds over the decade concluding at the end of June, 2015. You can enjoy the power of index investing simply by plunking money into index funds such as the SPDR S&P 500 ETF (NYSEMKT:SPY), Vanguard Total Stock Market ETF (NYSEMKT:VTI), and Vanguard Total World Stock ETF (NYSEMKT:VT). Respectively, they distribute your assets across 80% of the U.S. market, the entire U.S. market, or just about all of the world's stock market.

Dividends can turbocharge your investing.
Per John Buckingham of AFAM Capital, a study of Russell 3000 companies dating back to 1992 found dividend payers returned about four percentage points more per year, on average, than non-payers, when weighted equally. Researchers Eugene Fama and Kenneth French, studying data from 1927 to 2014, found dividend payers outperforming non-payers, averaging 10.4% annually vs. 8.5%. Data from Morningstar's Ibbotson Associates shows that between 1927 and the end of 2012, reinvested dividend income made up 42% of large-cap stock returns, 36% of mid-cap stock returns and 31% of small-cap stock returns.

Day trading or excessively active trading can wreck your returns.
According to an academic study of frequent traders by Brad Barber and Terrance Odean, the most active traders reaped the lowest returns. Indeed, between 1992 and 2006, fully 80% of active traders lost money and "only 1% of them could be called predictably profitable."

Inflation can cut your purchasing power in half.
Over the long haul, inflation has averaged about 3% annually. That may not seem too bad, but over, say, 20 years, that's enough to give $100,000 the purchasing power of just $54,000. Keep the effect of inflation in mind as you devise your retirement plan.

Don't count on your home as an investment.
Think of your home as a comfortable place to live, but not necessarily as a great investment. Nobel-prize-winning economist Robert Shiller is famous for his studies of the housing market, and his data suggest that housing prices have grown at a compound annual rate of just 0.3% over the past century (inflation-adjusted), while the S&P 500 has averaged roughly 6.5%. Sure, some homes in some places at some times will appreciate considerably -- but don't count on such luck.

Stocks rose 1,100-fold over the past 70 years.
Over the past 70 years, the S&P 500 advanced 1,100-fold. That's enough to turn a single, modest $1,000 investment into more than a million dollars. It's extra meaningful when you consider that this massive gain happened despite many double-digit market crashes, recessions, and even the Great Depression. The lesson is that over the long haul, the stock market tends to rise -- just not in a straight line.

You can slash your tax rate nearly in half by being a long-term investor.
The capital gains tax rate on short-term investments (those held a year or less) is the same as your income tax rate, which is 25% for most of us and 28% and higher for higher earners. On long-term capital gains, though (from assets held for more than a year), most of us will face a tax hit of just 15%.

Put these stats all together, and the prescription is clear. Have a retirement plan where you save diligently and invest effectively, perhaps in index funds and/or dividend-paying stocks. Beware the erosive power of inflation and steer clear of day trading. Enjoy your house, but don't plan on it making you rich, and be tax-smart, by aiming to invest for the long term.