More than 7.9 million Americans were unemployed at the end of 2015, according to the Bureau of Labor Statistics, and many of those received unemployment compensation. As tax time approaches, one thing that many unemployed workers don't realize is that they might have to pay taxes on the money they receive in unemployment benefits. As much as that might sound like adding insult to injury, being prepared for the tax consequences of unemployment will help you avoid a nasty surprise come April. 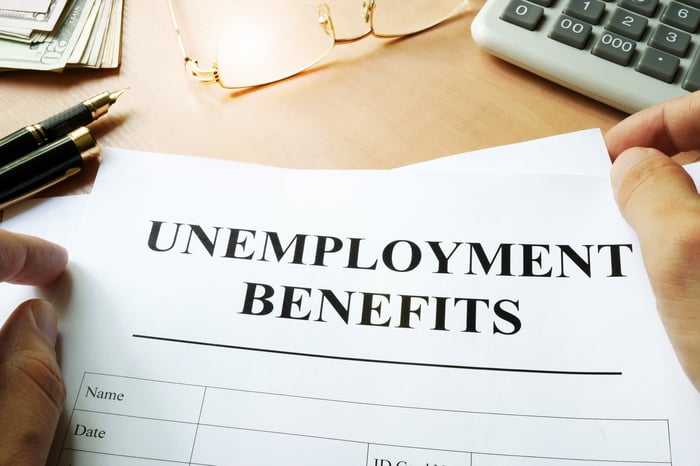 The IRS points out that workers' compensation payments are not treated the same way as unemployment benefits. The reason is that the purposes of the two programs are different. Unemployment insurance is intended for those who are actively looking for work, while workers' compensation pays to replace income for those who can't work because of a workplace incident. In addition, those who receive unemployment benefits from a private fund to which they voluntarily contribute don't have to pay taxes to the extent that what they receive is less than their contributions to the fund.

Federal withholding tax: usually no
The rationale for unemployment insurance benefits being taxed is that the money is a substitute for a salary or wages. Yet the federal government typically doesn't treat unemployment compensation as earned income for purposes of withholding Social Security and Medicare payroll taxes. That will save you 7.65% that would otherwise go toward those taxes.

State income tax: usually yes
Nearly all states that have an income tax treat unemployment compensation the same way that the federal government does. In most places across the country, you're required to include benefits in your taxable income for state income tax purposes.

There are, however, a few exceptions. In a handful of states, including California, Virginia, Pennsylvania, New Jersey, Montana, and Oregon, unemployment insurance income is completely tax-exempt. In a couple others, including Indiana and Wisconsin, a portion of unemployment benefits above certain threshold amounts can be exempt from tax, but the remainder is included in taxable income for state income tax purposes.

Other tax impacts
One reason why the taxation of unemployment compensation doesn't generate more controversy is that for many people, unemployment benefits are small enough that those who receive them don't have enough taxable income to pay taxes. That can make it moot that you have to include them in taxable income.

However, another consequence of unemployment is that it's not treated as earned income for some vital purposes. For instance, in qualifying for the earned income tax credit, you can't count unemployment benefits as eligible income. The result can be a much smaller credit if you become unemployed at some point in the middle of the year than if you were able to work in your job throughout the entire year.

Paying taxes on unemployment might not seem fair, but it's the law of the land. Preparing for it by having taxes withheld from your unemployment checks can be the best way to avoid having to pay an unexpectedly high tax bill when you file your return.