Please ensure Javascript is enabled for purposes of website accessibility
Log In Help Join The Motley Fool
Free Article Join Over 1 Million Premium Members And Get More In-Depth Stock Guidance and Research
By Selena Maranjian, Brian Stoffel, and Jason Hall - Feb 1, 2016 at 10:38AM

Fail to save and invest for retirement, and you might be kicking yourself years later. Don't procrastinate about it -- it's very important.

Excuses can halt your progress on the road financial security. Image: Pixabay

Most of us know we need to be saving and investing for retirement. Yet many of us are just not doing so. According to the 2015 Retirement Confidence Survey, 35% of American workers who were asked how much they have saved for retirement and answered have less than $1,000 saved (excluding the value of their home). That's quite alarming. Here are some common excuses people offer for not saving for retirement.

Selena Maranjian: One of the worst excuses for not saving for retirement goes something like this: "I'll start saving later." That's a terrible shame, because the sooner you start investing, the more you can accumulate. Time is one of the most important factors in wealth building, so by procrastinating you're short-changing your future.

Let's review an example. The following table shows you how much you can accumulate over the 15, 20, 25, and 30 years with $8,000 annual investments that grow at an average of 10% annually:

I stuck in an extra year there, to show you what a difference a single year of procrastination can make. If you put off saving and investing for retirement by just one year, so that you're only able to save for 24 years, not 25, you'll lose out on about $86,700! Remember that it was just one $8,000 investment that you didn't make, but over 25 years, it might have grown more than tenfold.

Your most powerful dollars are the ones you invest the earliest, as they have the longest time to grow. Don't put off preparing for retirement. Your golden years can shine much more brightly if you plan ahead.

You can amass great wealth or at least a comfy retirement -- but only if you work at it. Photo: Jeff Belmonte, Flickr.

Jason Hall: The worst excuse? "I can't afford to."

Look, I get it. There are a lot of people who struggle to make ends meet every day, living hand to mouth. However, the vast majority of people have the ability to set something aside for retirement on a regular basis. Many of us simply choose not to, or don't understand how even a small amount of money can grow over time. Simply look at the table above in Selena's segment.

Here's the real kicker as to why not having enough money today is a lame excuse: Today you can work. You can generate income. What happens when you're older? Think it's a struggle when you're young and healthy and capable? See how that works out when you're approaching 70. Find a way to set aside something every paycheck and invest it in a low-cost index fund once or twice a year.

Brian Stoffel: We humans are excellent procrastinators -- especially when it comes to saving for retirement. From an evolutionary perspective, this makes sense: whether or not we survived was a function of our ability to handle immediate threats. Our long-term survival was more based on the strength of our tribe -- something that didn't require continual action the same way saving for retirement can.

Just like the teenager who keeps pushing off his term paper until the last minute, many Americans simply use the excuse that they'll work longer to meet their savings needs for retirement. Sadly, we're terrible at building in contingencies for what will eventually happen to all of us.

Since 2002, Gallup has surveyed Americans to find out when they think they'll retire, and when they actually retire. As you can see, we often think we'll stay in the workforce longer than we're able to. 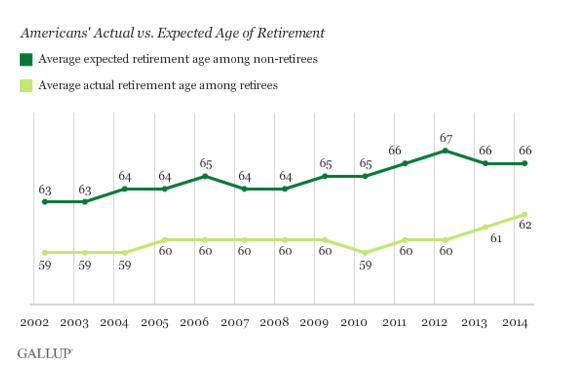 Why does this gap exist? Because we don't like to think about the things that can happen to us: a debilitating injury or sickness, getting fired from a job and being unable to find another, or simply burning out. These are serious considerations that people need to remember before going back to the well and using the excuse of, "I'll just work later," to justify their poor retirement planning choices.