No job. No responsibility. No angry boss yelling at you to get your work done. It's everyone's dream, right?

Not so fast. If you want to retire early, there's one enormous, uncomfortable, and vitally important question that you need to answer first. And if you can't answer it yet, don't even bother reading the rest of this article -- you could be setting yourself up for a nervous breakdown.

What is that question? I'll let a Twitter user known as TheHappyPhilosopher -- a doctor who purposely downshifted his work life to free up time for his personal life -- put his spin on it.

Financial freedom simply creates space for something else.

If there is no something else the freedom doesn't matter.

Your job is to figure out what it is.

So do you know what your something else is? If not, it's not worth knowing how to retire early. You need to spend some time -- perhaps a few weeks, months, or even a year -- figuring it out. Expect it to be interesting, then dreadful, then painful, then joyously freeing.

At least, that's how I experienced it when my wife and I took a "mini-retirement" seven years ago in Costa Rica. It ended up being part relaxing, part quarter-life-crisis.

There's no universal "right" or "wrong" answer when it comes to what your "something else" is. There are just right or wrong answers for you. Retirement specialist, author, and radio host Wes Moss has found that retirees who enter retirement with at least three Core Pursuits tend to be much happier than those who don't.

A Core Pursuit -- which is another way of saying your "something else" -- is defined as "any activity that is engaging and helps give you purpose and meaning."

Once you've figured this first, hard part out, the rest flows much more freely. Since you've identified your purpose, the motivation for completing the following steps is much higher. 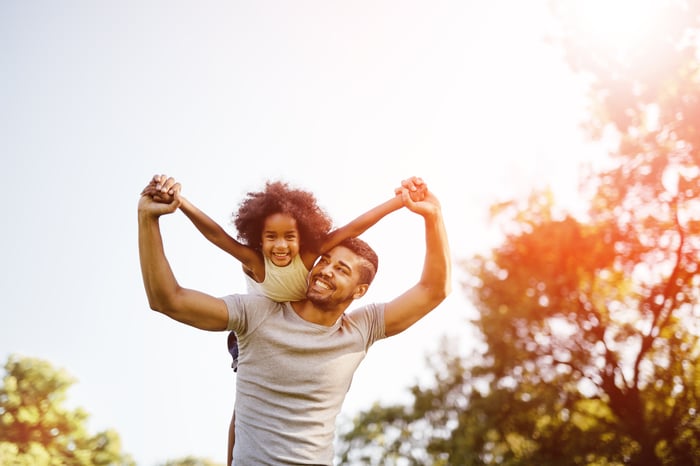 Step 1: Find your level of "enough"

The first thing you need to figure out is what you really need -- in terms of material comforts -- to be truly happy. Without this step in place, it is exceedingly easy to fall victim to the hedonic treadmill and keep chasing after the Next Big Thing -- which only brings temporary satisfaction.

As a general rule of thumb, the less you need, the better -- we'll explain why in step four.

Life is unpredictable. In order to make sure you can handle the inevitable curve balls, you need to have an emergency fund to draw on. I aim to always have enough cash to cover three to six months of expenses without any income.

Some people think an emergency fund is a waste of time. And while it's true that a pile of money sitting around earning very little looks awful on paper, it creates enormous breathing room emotionally.

Step 3: Pay down that high-interest debt

If you have high-interest debt -- often via credit cards -- you need to treat it like the financial emergency that it really is. Because the money you haven't paid off continues to compound faster than it could grow elsewhere, throw all of your extra cash at this point at paying down that debt.

Once the first three steps are complete, things become much more fun. When it comes to investing, you can choose to be either be a passive dollar-cost-averager, or -- by using services like those we offer here at The Motley Fool -- take an active approach to creating your wealth. There's no right answer.

But no matter how great of an investor you are, there's likely one variable that will play an outsized role in how quickly you can retire: your savings rate.

The more you save by definition means the less you need to live sustainably; this both gives you more to invest with, and lowers your retirement number. It's a virtuous cycle with unmatched compounding power.

How quickly could you achieve financial independence? Check out this chart, made by fellow Fool Daniel Sparks. 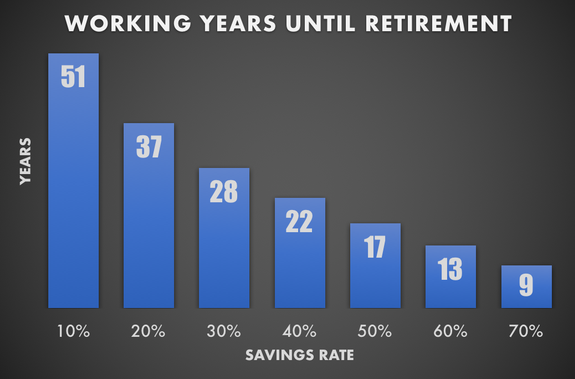 DATA FOR CHART, ROUNDED TO THE NEAREST YEAR, IS BASED ON TABLE IN MR. MONEY MUSTACHE'S BLOG. CHART BY DANIEL SPARKS.

That's right. If you're able to live off of 50% of what your household takes in, your "mandatory" working years could be less than two decades. In the grand scheme of things, that's pretty short.

Of course, not everyone can -- or will want to -- retire early. And that's ok. But if this sounds like something you'd be interested in, start doing the hard work today. You'll feel better about it both now, and in the future.