Please ensure Javascript is enabled for purposes of website accessibility
Log In Help Join The Motley Fool
Free Article Join Over 1 Million Premium Members And Get More In-Depth Stock Guidance and Research
By Brian Stoffel - Feb 27, 2016 at 7:03AM

Every situation is different. But if you fall under one of these three categories, 67 probably isn't the right time for you.

Consider when you want to hang this banner carefully. Photo: Anoka County Library, via Flickr.

Social Security is immensely important to our country's retirees. The program provides just less than 40% of income for all retirees, according to the Social Security Administration. Deciding when to file for Social Security can be a tricky proposition.

1) If I file earlier, I'll be getting stiffed by the system
While it's true that your monthly check will be lower if you file anytime between your 62nd and 67th  birthdays, it doesn't necessarily mean that "the system" is taking advantage of you. That's because the government uses actuarial tables to calculate life expectancy, in an attempt to make lifetime payouts of equivalent value no matter when you file for benefits.

Take the average retired male -- Mark -- who filed for Social Security at 62 with a full benefit of $2,000 per month. But because he filed five years early, his benefit would be reduced by 30%, to $1,400 per month. His buddy, Ben, who had the same benefit levels, waited until age 67.

But we need to remember that Mark will be getting benefits -- even reduced ones -- for a full 60 months before Ben ever sees a penny. With such a head start, it isn't until they turn 79 that Ben finally overtakes Mark. 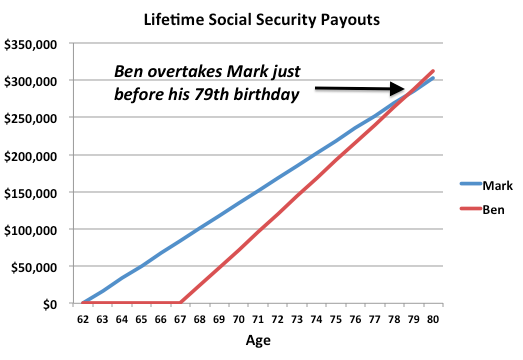 That also assumes that they both live that long. Truly, if working one more day sounds awful, but you can afford the reduced payouts, waiting until 67 so that you can simply say you got your "full benefits from the system" is terrible.

2) I'm going to "file and suspend"
This is a big deal -- I even included it in a similar article last week. For decades, retired couples have been able to exploit a loophole in Social Security. Here's how it worked, and why it was used:

Due to a bipartisan budget deal passed in 2015, this loophole will officially be coming to a close at the end of April this year. Your spouse either needs to wait until you plan to start taking benefits without a suspension, or you need to resign yourself to claiming benefits earlier than expected.

3) You're working a job you love, and don't need the money, but do it anyway
Contrary to what a lot of us might think, there are many people out there who work jobs that they love well into their 60s and 70s. If you are one of these people, have relatively good health, and don't need the money coming from Social Security to meet your daily needs -- why not wait?

If you don't need all that extra money anyway, you can give it away. Studies show -- and hopefully personal experience is all the evidence you really need -- that there's a great deal of pleasure that comes from being able to give back to causes that matter to you.

If something does come up that causes you to spend more than you expect after your 67th birthday, you can file immediately, and have access to that money. Plus, the guaranteed 8% growth you'll be getting is tough to beat.