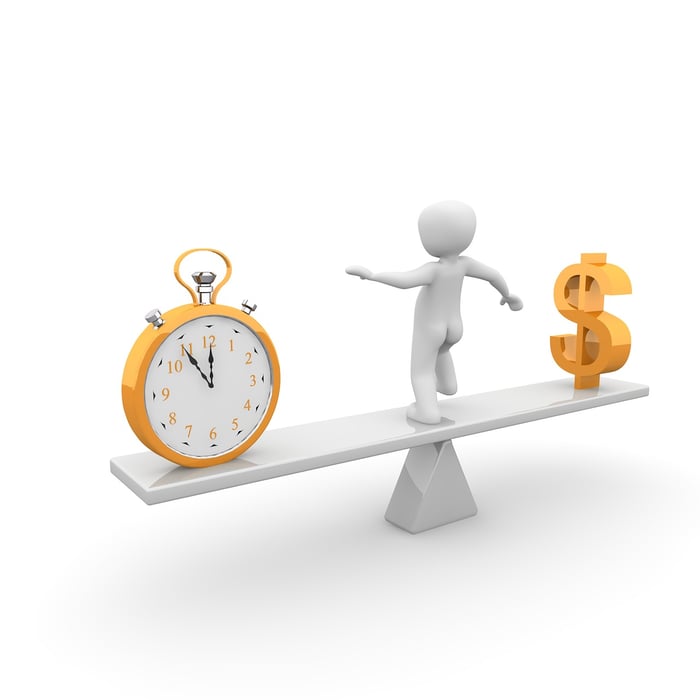 For decades, retirement planners and financial advisors have recommended the "4% rule" as a way to make retirement savings last for decades. But with interest rates so low, people living longer, and rising healthcare costs, it's not so clear anymore whether the 4% rule still makes sense.

Let's take a closer look at the 4% rule and the key factors that affect whether it will work for you, or not.

The 4% rule explained
In short, it's a basic guide for how much a retiree should withdraw each year from their retirement savings, developed by a financial planner named Bill Bengen in the early 1990s.

The idea behind the 4% rule is simple: By starting with a withdrawal of 4% of your retirement account balance, and then increasing that amount by inflation each year, the average retiree should be able to count on sustainable income for decades, and not run out of money in old age. The rule was based on having a mix of both fixed-income investments such as bonds, and long-term growth assets such as stocks, to generate interest, dividends, and capital gains to offset the withdrawals taken each year.

Why it might not work for you
Three main reasons:

According to the Transamerica Center for Retirement Studies' 2015 annual Retirement Survey of Workers, the median estimated retirement savings for people in their 60s was $171,000. Based on the 4% rule, that would generate approximately $6,840 per year in income, before inflation increases.

For MJ, there's a bigger potential problem than just not getting enough income using the 4% rule: Not having enough money in old age for long-term care.

Here's the problem ...
When the 4% rule was created more than 20 years ago, interest rates were much higher. MJ will see much lower returns for fixed income investments such as CDs and bonds today than when the rule was developed, while inflation has remained about the same: 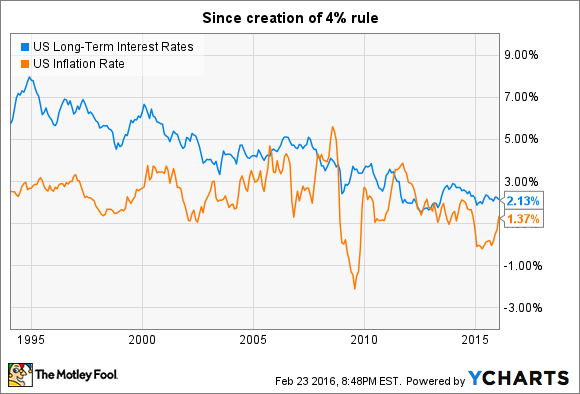 Interest rates are finally set to start climbing again, but it will be years before bonds and other fixed income instruments return to historical average yields, and current yields may not even keep up with inflation. This is troublesome for MJ, but it's only the start.

If you combine the low-rate environment with the low starting balance that MJ has at retirement, the 4% rule may be unworkable because:

Here's a rough calculation. Let's say MJ invests half the portfolio in relatively lower-risk stocks, and the other half in bonds and CDs, and the stocks generate 5% annual returns on average, while the bonds and CDs pay about 2% yield today (but that amount goes up about 5% per year on average as interest rates return to normal).

Is that not enough money at 80?
It may be, but the issue is that MJ will need more care in old age, and Medicare won't pay for a lot of things. For instance, if MJ falls and breaks a shoulder, Medicare would cover treatment, including rehab -- even a short stay in a rehab facility . But if MJ has problems getting dressed, or cooking, or with other daily living activities afterward, Medicare isn't going to pay for someone to help with those things.

Depending on where MJ lives, it would cost over $40,000 per year today have in-home care to help with things such as cooking, cleaning, bathing, and getting dressed. If MJ were to need to move into a nursing home, the cost could exceed $50,000 to $90,000 per year, and again, Medicare won't pay for that.

Furthermore, those are the costs today. Fast-forward 15 years, and it's going to cost a lot more. Hopefully MJ has other assets, such as home equity, to help pay for these costs later in life.

What should MJ -- or you -- do?
While retirement should be a chance to enjoy the fruits of your labors, you have an advantage in your early retirement years that you may not have when you get older: the ability to continue earning money. And considering that many retirees have trouble finding things to keep them active and engaged, and often struggle with adjusting to retirement life, it may be good for your financial and emotional well-being to continue working in retirement. Even working a couple of days a week could produce enough income to allow you to put off dipping into your nest egg for a few years, and that could make a huge difference as you age.

Or to put it another way, slowing down may be a better idea than stopping, at least early in your retirement.

One Fool's opinion: Even in retirement, still plan for the long term
If you're like MJ, and the retirement account balance you're starting from isn't enough for the 4% rule to give you enough income today and also preserve cash for later in life, you probably need to keep generating some income early in retirement. This could save you financial hardship when work isn't a possibility and you may need to pay for expensive care.

If you're still years away from retirement and MJ's scenario looks familiar, the smartest thing you can do today is crank up your retirement savings while you still have time. 4% rule or otherwise, the number one factor in the quality of your retirement will be how much you have saved when you get there.