Please ensure Javascript is enabled for purposes of website accessibility
Log In Help Join The Motley Fool
Free Article Join Over 1 Million Premium Members And Get More In-Depth Stock Guidance and Research
By Sean Williams - Mar 11, 2016 at 7:41AM

You can't do any better than 34 for 34. Find out how following two critical steps could allow this investment to make money for you, too!

Volatility is a normal part of investing, but to many investors, it might appear that the fluctuations this year have been even wilder than usual. For some, it's been too much to handle, and they've retreated to the sidelines.

Statistically speaking, people who buy individual stocks have a 50-50 shot at making a profit. Yet even the best stock pickers tend to be wrong at least a third of the time. It's a fact that top investors have come to accept -- even Warren Buffett, whose most famous quote might be, "Rule No. 1: Never lose money. Rule No 2: Never forget rule No. 1." Buffett, who has turned less than $10,000 into more than $60 billion over the course of six decades, recently waved the white flag on U.K.-based grocer Tesco, and sold his stake, taking a hefty loss in the process. Understanding that no investor is perfect is probably the toughest lesson every investor is taught at some point.

Yet, as history has shown, being wrong from time to time is perfectly fine. In fact, even being wrong more often than you're right can work out well. They key is in finding a couple of great stocks and letting your investment in them grow and compound over the long-term. This is exactly what Buffett has done at Berkshire Hathaway with core holdings Coca-Cola and Wells Fargo. The Oracle of Omaha has generated huge gains from both businesses, but sees no reason to sell, especially considering the $560 million in dividend income Berkshire Hathaway receives annually just from its Coca-Cola stake.

This stock has a perfect track-record for making investors money...
But, what if you were never wrong? We know that all investors will be wrong at some point, and that there are no guarantees in the stock market, however the data unequivocally has shown that if you buy one specific investment – the SPDR S&P 500 Trust ETF (SPY -0.81%) – you should make money.

The SPDR S&P 500 Trust ETF closely tracks the movements of the broad-based S&P 500 (^GSPC -0.88%) index. As a refresher, the S&P 500 contains just over 500 stocks from the largest publicly traded businesses in the U.S. (some companies have multiple share classes represented, hence the slightly larger than 500 number). It's arguably the most representative measure of the health of American businesses and the stock market. 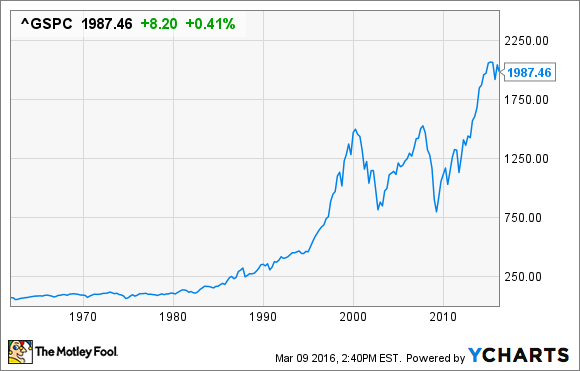 According to Yardeni Research, since 1950 the S&P 500 has endured 35 stock market corrections of 10% or more (note: rounding applies, so a 9.5% dip would count), including our latest move lower to begin 2016. Now here's where things get interesting. In every prior stock market correction before our latest (which really shouldn't be counted since it's still ongoing), optimists have eventually pushed the S&P 500 above its previous high point, thus wiping out all index-based losses associated with a correction or bear market. That's 34 for 34, or a perfect 100% success rate. Since the SPDR S&P 500 Trust tracks the movements of the S&P 500, this would imply that buying this ETF should ensure you eventually turn a profit.

...If they follow two important steps
However, there are two keys to making this strategy work for you.

First, you'll need time. If you bought the ETF into any of the stock market corrections in the 1990s, you'd find yourself above water in a matter of weeks or months. However, buying the S&P near the peak of the dot-com bubble or just ahead of the Great Recession would have meant you'd have needed to patiently hold on for years to recoup your losses and turn that red arrow into a gain. The point is that time is the friend of investors. As Buffett recently summarized in his interview with CNBC following the release of Berkshire Hathaway's annual shareholder letter:

I never know what markets are going to do. [I]n terms of what's going to happen in a day or a week or a month or a year, I never felt that I knew it than and I never felt it was important. I will say that in 10, or 20, or 30 years, I think stocks will be a lot higher than they are now.

The second key to success is making regular investments into the SPDR S&P 500 Trust ETF. If you just made one lump-sum purchase prior to a correction, then you'd have been in the red for quite a while. However, if you purchased at regular intervals, regardless of whether the stock market was sinking or rising, you'd have gotten back in the black much faster, thanks to dollar cost averaging. In other words, if you avoid trying to time your investments, you'll wind up better off.

It's also worth noting that the SPDR S&P 500 Trust ETF allows you to take advantage of the many S&P 500 companies that pay a dividend. With its very low expense ratio and a yield of 2.1%, investors should net a yield of about 2%  annually by holding onto their investment.

There may be no sure things in the stock market, but buying the SPDR S&P 500 Trust ETF regularly and holding over an extended period of time could be as close as you can get to guaranteed long-term gains.