They're not right for everyone.

Though we'd all like to think that rising college tuition costs will eventually have to start tapering off, there's no indication that prices are about to start falling just yet. For the 2015-2016 school year, tuition costs are estimated at $9,410 for a public four-year in-state college, $23,893 for a public four-year out-of-state school, and $32,405 for a private nonprofit four-year college. Of course, these figures don't include room and board, which can add thousands to the cost of financing a college degree.

If you're intent on paying for a college education, or at least helping a child of yours pay for one, you've got some serious saving to do. In fact, you may be tempted to open a 529 plan to help grow whatever savings you can amass into enough money to make a dent in your future tuition bills. But while 529s do offer some advantages -- primarily, the ability to grow your money tax-free -- they also come with a few major drawbacks. Here are three reasons you may want to hold off on signing that 529 paperwork. 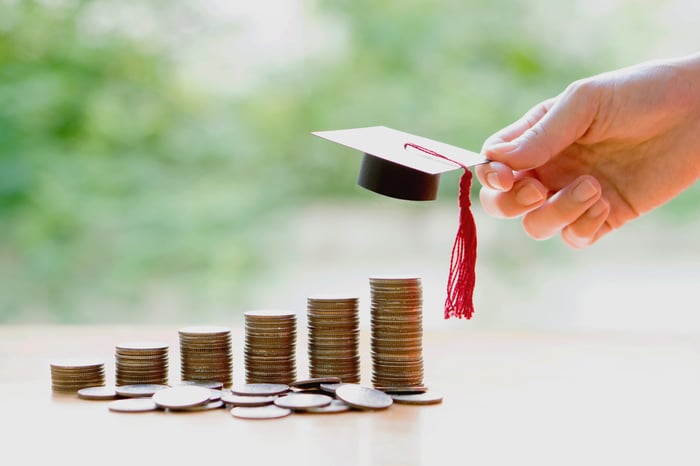 1. You have to use that money for college
Now at first glance, this may not seem like such a bad thing. After all, if you're going to open a college savings account, it makes sense that the money in it be earmarked for college. But what happens if your intended beneficiary decides to forego college in favor of opening up a business, or chooses a local college that costs far less than the private institution you've been saving for? Suddenly you're left with too much money in your 529, and though some might argue that that's a good problem to have, it means you could be stuck paying a 10% penalty on your investment gains.

Whereas other investment vehicles, like plain old mutual funds, allow you to withdraw your money for whatever reason you choose, with a 529, you're limited to qualified college expenses only if you want to avoid getting penalized. That means you can't use the money to cover an unexpected medical bill, emergency home repair, or any other non-educational expense with the potential to derail you financially. Now on the bright side, the penalty for non-qualified 529 withdrawals is limited to your gains alone; it doesn't apply to whatever money you contribute initially. But it's still a hefty price to pay nonetheless.

2. You could get hit with high fees
The folks who administer 529 plans don't just do so out of their goodness of their hearts. They're in it to make money, which means you could face significant fees by opening a 529 plan. In fact, recent data confirm that 529 plans charge higher fees than mutual funds. On average, 529 plans cost 0.21 percentage points more per year in fees than comparable mutual funds. What that means is that for every $100 you invest in a 529, you'll pay an extra $0.20 per year in fees than you would by putting money into a mutual fund instead. And over time, those fees can eat away at whatever return your plan otherwise generates in addition to the tax benefits 529s offer.

3. Your investment choices may be limited
When you open a 529, you're limited to the specific investments offered by your plan, which may not be diverse enough to help you accomplish your savings goals. A Roth IRA, for example, will typically offer a much greater selection of investment choices. Additionally, some of your plan's investments may come with their own fees, thereby adding insult to injury. Of course, the good news is that you don't have to choose a 529 offered by your home state; if you find one elsewhere that offers better investment options, you're free to put your money there instead. On the other hand, if you're like many people who don't open 529s before they have kids, you're dealing with a limited savings window, and having fewer investment options could prevent you from reaching your target balance in time.

If you are going to open a 529, your best bet is to do so as early as possible to give your money time to not only grow, but to generate enough of a long-term return to compensate for those substantial setup costs and fees. Remember, unlike retirement, which you have multiple decades to save for in theory, college has a way of sneaking up sooner than you might expect, so the more vigilant you are about saving, the better off you'll be when the time comes to write out that first tuition check.