Please ensure Javascript is enabled for purposes of website accessibility
Log In Help Join The Motley Fool
Free Article Join Over 1 Million Premium Members And Get More In-Depth Stock Guidance and Research
By Brian Stoffel - Apr 15, 2016 at 9:02AM

Yup, and the clock is ticking. Here's what you need to know...

April 30th will be your last day to take advantage of this Social Security loophole.

Social Security is massively important to America's retirees. According to a report by the Social Security Administration, over half of married elderly persons -- and nearly three-quarters of elderly single filers -- depend on the program for over half of their income in retirement.

That's a massively important data point that shouldn't be taken lightly. It also underscores how important a perfectly legal loophole that allows married couples to boost their Social Security income has been. That loophole -- referred to as "File and Suspend" -- will be closing on April 30th...likely forever.

Here are the basic facts you need to know.

How benefits are calculated
To understand how this loophole works, and whether or not you should consider taking advantage of this closing window -- there are a couple of key pieces of information to know.

But here's the catch -- and this is the key -- regular retired worker benefits increase by 8% for every year you wait under age 70. But spousal benefits stop increasing once the wage-earner reaches the full retirement age -- which is currently 66.

How file and suspend works
Over time, a number of savvy retirement planners have realized that this discrepancy opened up a loophole. Here's how it worked.

In a previous article on the topic, I used this chart to demonstrate how -- if a couple lives long enough -- it can prove to be a significant boost in lifetime Social Security income. This assumes the wage earner would have benefits of $1,500 per month at age 66. 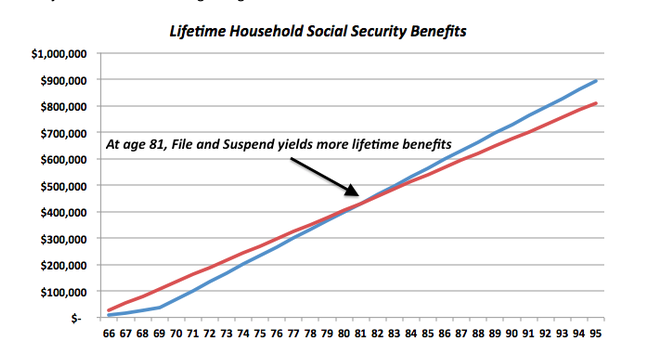 Why it's closing
When Congress passed its bipartisan budget deal in 2015, a number of loopholes in Social Security were closed. File-and-suspend was one of them. Luckily for those who still want to use the strategy, there's was a 150-day window that was granted before the loophole closes forever. That window will close -- likely forever -- on April 30th.

If this sounds appealing to you, talking to your financial planner ASAP is of the utmost importance. Otherwise, both members of the couple will either have to (1) start receiving benefits at 66, or (2) wait until age 70.