Please ensure Javascript is enabled for purposes of website accessibility
Log In Help Join The Motley Fool
Free Article Join Over 1 Million Premium Members And Get More In-Depth Stock Guidance and Research
By Brian Stoffel - May 16, 2016 at 7:02AM

Research finds that it only makes financial sense under two scenarios to wait until the maximum Social Security age. 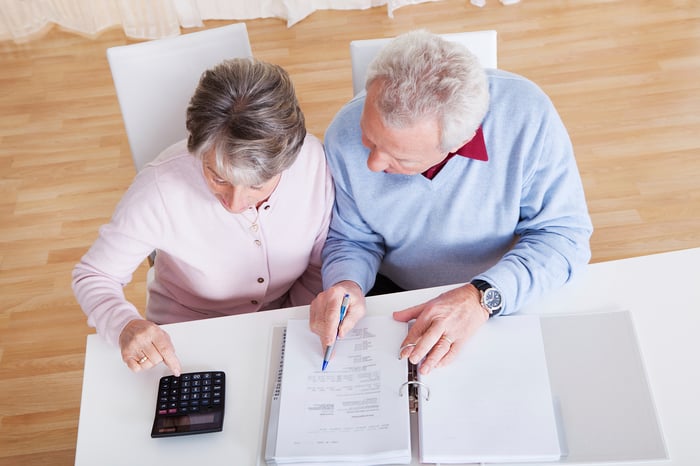 For married couples, coordinating when to claim Social Security benefits can be a confusing exercise. But it's an important one, as it can have a huge impact on income further down the line.

Currently, the full retirement age for Social Security is 66. But you can start collecting as early as 62, accepting a 25% cut compared to your full benefits, or wait as late as 70 and get an extra 32% in your monthly check.

The vast majority of retirees claim benefits at 62 or shortly thereafter. Most of these folks simply have no choice -- they need the money to make ends meet in retirement. But a 2009 study out of Boston College says that many couples are forgoing an increased check in the future even when it's a viable option:

Who should wait until 70 to claim Social Security?

The Center for Retirement Research at Boston College attempted to answer this question in a 2009 paper that weighed several factors, including opportunity costs, life expectancy, and risk tolerance. Researchers calculated a metric they called Social Security Equivalent Income (SSEI) to measure the ideal retirement age for couples with varying characteristics.

They found only two circumstances -- on average -- in which a spouse should wait all the way until 70 to claim Social Security. Both assume that the couple is highly risk-averse. Because it matches historical trends, we'll refer to the husband as the higher-earning partner.

The thinking behind this is simple: the income that the wife brings in -- plus any retirement savings that the couple has -- will keep the household afloat until the husband turns 70. Not only will this increase income after age 70, but it will increase the wife's lifetime collection. Remember, almost all wives outlive their husbands, and upon his death, the woman assumes the husband's full benefit -- assuming that it is the larger of the two.

There are two important differences between this instance and the previous. First, it applies whether this is a dual-income or single-income household. Second, both husband and wife are assumed to start collecting benefits at the same time. If the wife is four years younger, this means that she'll start collecting at age 66. This is key, because if the wife is relying on spousal Social Security benefits, she must wait until her husband claims benefits before she can do so.

When should you claim benefits?

Before you use these results as a reason to claim your Social Security benefits at your first opportunity when you turn 62, there's one thing to keep in mind: there are many scenarios that researchers found the best age to claim was 69...or 68...or other ages in the spectrum between 62 and 70. Just because your circumstances don't fit the two scenarios above, that doesn't mean that you should claim either at 62 -- the earliest possible -- or at the current "full" retirement age of 66.

There are as many different variables to take into consideration when claiming Social Security as there are retired couples in America. This article's goal is simply to add some color and common sense to what researchers have discovered over time.

In the end, most steps you can take to guarantee a comfortable retirement have little to do with Social Security: live below your means, save and invest the difference, and repeat every year that you are working.