Social Security is primarily funded by payroll taxes assessed on wages in the United States. The employer pays 6.2% of income, and the employee chips in another 6.2%. The self-employed, being both employer and employee, pay 12.4% of income into the program. Taxes are only assessed on the first $118,500 of income in 2016.

Just four sources provided the entirety of Social Security's funding in 2014, the last year for which data is available: 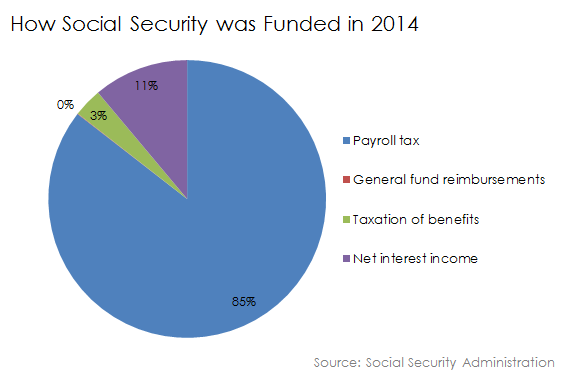 The year 2014 is an excellent year to study, because it represents a fairly typical year for Social Security's funding sources. If you go back to 2011 or 2012, years in which the employee-side of payroll taxes were temporarily cut by 2 percentage points, the funding mix is very different.

Note that the biggest difference between 2012 and 2014 is the change in reimbursements from the general fund. The general fund had to help support Social Security to offset a steep decline in payroll tax revenue due to a 2 percentage point reduction in payroll taxes for the 2011 and 2012 tax years. 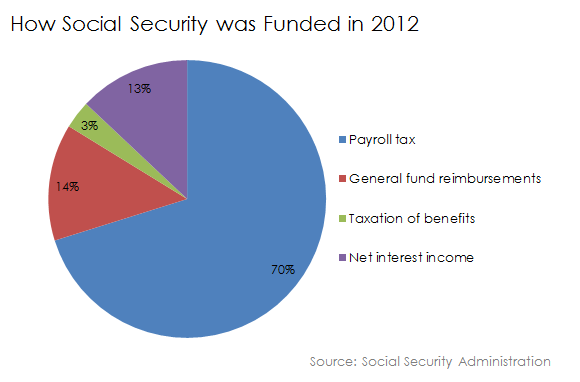 Barring a steep recession, it seems unlikely that payroll taxes will be reduced, or that the sources of Social Security's funding will ever again look like they did in the 2012 tax year. From 1990 to 2016, the base payroll tax rate charged to employers and employees was unchanged save for 2011 and 2012.

How Social Security will be funded in the future

The Social Security Administration's actuaries believe that there is little reason to expect the program's funding sources to change dramatically in the future.

Source: Social Security Administration's 2015 OASDI Trustees Report. Amounts may not add to 100% due to rounding.

Not surprisingly, an increase in the number of people receiving benefits in 2024 will result in an increase in taxes on benefits. The program's actuaries believe that a smaller pool of assets in the Trust (the Trust is expected to shrink by 6% from 2014 to 2024) will result in lower net interest income. Finally, payroll taxes are also expected to grow at a slightly faster rate than the growth in total funding.

Importantly, as with all projections, the Social Security Administration could be miles off in its estimations. It wouldn't be out of the realm of possibility for payroll taxes to be increased, or expanded by 2024. Furthermore, predicting the general level of interest rates over the next 8 years with any accuracy is a very difficult thing to do. Note that all figures for 2024 are based on its "intermediate" expectations, or the middle estimate between high- and low- estimations.

But despite the inherent uncertainty in predicting the future, there are some things that we can almost certainly say: Payroll taxes will continue to fund the vast majority of the program and an aging population of Boomers will result in more income from taxes on benefits in the future.