Please ensure Javascript is enabled for purposes of website accessibility
Log In Help Join The Motley Fool
Free Article Join Over 1 Million Premium Members And Get More In-Depth Stock Guidance and Research
By Matthew Frankel, CFP® - May 24, 2016 at 1:19PM

By making these IRA moves now, you can have a tremendous impact on your financial security later on.

An IRA is an excellent way to save for your retirement and reduce your tax bill. With smart planning, you can maximize their compounding power, safety, and even your family's financial security. With that in mind, here are some smart IRA moves you can make right now that will help set yourself up for retirement success.

Make your contributions automatic and aggressive

As I mentioned, IRAs are such great ways to lower your tax bill while setting yourself up for your future at the same time, but surprisingly few people take advantage of them. In fact, just 15% of people contributed to an IRA in a recent tax year, even though nearly 40% of households own an IRA. Some of this difference is due to rollover IRAs, while some is simply indicative of people who opened an IRA but don't make regular contributions. Many of the people who did contribute fell far short of the maximum.

One of the best ways to make sure you're saving enough, and will continue to do so, is to make your contributions automatic. Set an automatic withdrawal from your checking account to coincide with each payday, and you'll be surprised at how painless the process becomes. Before long, you won't even realize the money is gone -- it'll feel like it was never there in the first place.

For 2016, you can contribute as much as $5,500 to your IRA (plus an additional $1,000 if you're over 50), which translates to about $211 per biweekly pay period. Of course, if contributing this amount of money would put an undue strain on your finances, contributing $50 or $100 at a time is better than nothing at all -- the most important thing is consistency.

If it's been a while since you've done so, it might be a good idea to rebalance your portfolio. In other words, see if any one stock, fund, or sector makes up a disproportionate amount of your portfolio, and take action to correct it.

As a simplified example, let's say that you bought three stocks a decade ago -- Apple, Johnson & Johnson, and Wells Fargo. We'll say that you invested $10,000 in each one, so each stock started as exactly one-third of your portfolio. Here's how this portfolio would look a decade later:

Now, none of these stocks performed poorly over the past 10 years, but Apple was the clear standout. The problem is that your portfolio is now too reliant on Apple's performance for its future success. If Apple has a bad quarter and drops by 15%, your portfolio would lose about 11% of its value. On the other hand, if Wells Fargo were to have an excellent year in 2016 and gain 30%, your overall portfolio would gain just 3.5%.

Having one stock deliver such market-crushing performance certainly isn't the worst problem to have, and obviously a well-rounded portfolio has more than three stocks in it, but the idea still applies. In this case, it would be a good idea to sell some Apple shares and buy some of the other two in order to equalize their weight in the portfolio.

If you have an old 401(k) from a previous employer, now may be a good time to roll it over into an IRA. While you may be able to leave your 401(k) where it is, or roll it into your new employers' plan, there are a couple of good reasons to switch to an IRA.

First, you'll have many more investment options. In a 401(k), you can generally choose from a selection of mutual funds. With an IRA, you have the choice of any stocks, bonds, or funds you want, literally giving you thousands of possible places to invest your money.

Also, even if you don't want to deal with the effort of researching and selecting individual stocks and bonds, you can still benefit from the increased investment selection. You'll have the choice of thousands of mutual funds, and you could potentially find funds similar to those in your 401(k) with significantly lower fees.

Take a look at your mutual fund fees

When it comes to mutual funds and ETFs, the performance of the fund's assets is only one piece of the puzzle. Mutual fund companies make their money through their funds' expense ratios, and this can vary dramatically between funds -- even those with similar investment strategies. You may be surprised at the difference a small decrease in expense ratio can make. 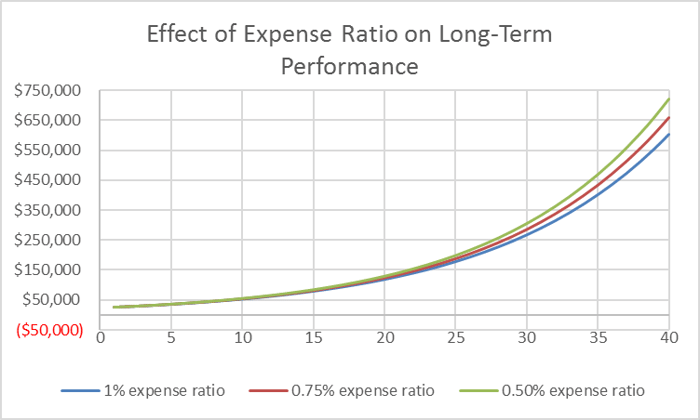 You may be surprised to learn that the lower-priced fund would return $22,000 more than the more expensive option -- a difference of nearly 10% in the overall investment return. Over longer periods of time, the difference is even more dramatic. Take a look at your funds' expense ratios and check if there may be a less-expensive option that could meet your investment objectives.

Take care of your spouse's retirement

Generally, you cannot make an IRA contribution if it exceeds your earned income for the year. In other words, if you don't earn any income, you can't make a contribution. However, married couples may qualify for an exception.

So, if your spouse doesn't earn enough to contribute to an IRA on their own behalf, this can effectively double your ability to take advantage of IRA benefits. This can be a great way to boost your retirement savings, especially if you've already maxed out your own IRA contributions.