Please ensure Javascript is enabled for purposes of website accessibility
Log In Help Join The Motley Fool
Free Article Join Over 1 Million Premium Members And Get More In-Depth Stock Guidance and Research
By Brian Stoffel - May 29, 2016 at 5:01AM

Rely on spousal benefits? It depends on these two variables...

At the end of April, one of the better-known loopholes in Social Security closed. Known as "File and Suspend," the strategy allowed couples to maximize both their spousal and retired-worker benefits.

You can get more details on the now-defunct tactic here -- but that's not the purpose of this article. I want to fill couples in on how to maximize Social Security benefits in a world without File and Suspend.

The source of my data is a 2009 research paper from the Center for Retirement Research at Boston College. In it, researchers attempted to find out how couples could carefully plan when to start receiving Social Security benefits in order to maximize lifetime payments. Even though the paper was completed in 2009, it is just as applicable today as back then, because researchers did not take file-and-suspend -- and a few other loopholes that have recently closed -- into consideration. Instead, it used historical data to try and figure out how couples could maximize the value of their Social Security equivalent income simply based on when they claimed.

What type of couples does this Social Security strategy apply to?

There were many variables taken into consideration in the study, and I won't dive into all of them here in this article. There are two key variables we'll focus on: 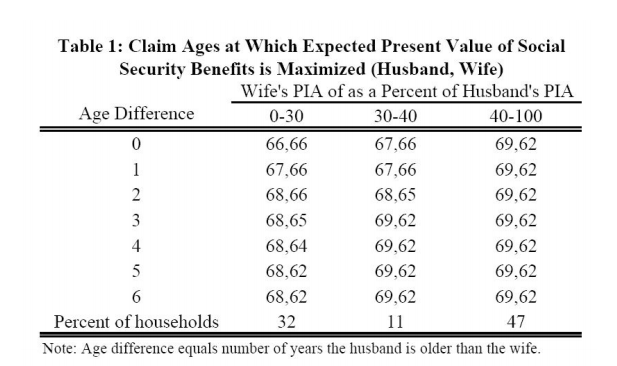 To be sure you're reading this right, let's consider a couple where the husband is four years older than his wife. Assume that his full monthly benefit is $1,000 based on his earnings history, while hers is $250. In other words, her PIA is 25% of his.

If we take a second to digest this, it makes a lot of sense.

If the wife's benefit is less than 30% of her husband's, they should claim at the same time (note: not necessarily at the same age). That's because the wife can't receive spousal benefits until her husband claims; she can only receive her own retirement benefits. But those benefits equal 50% of her husband's -- a clear premium above what she'd be getting on her own.

For the second group, things get a little more nuanced. If the wife starts receiving benefits sooner, it gives the couple some money to use while they wait for the husband's higher benefit to get close to maximizing (it increases 8% for every year that an individual waits).

For the last group -- where the wife's PIA is over 40% of the husband's -- the strategy is clear: get the wife's benefits ASAP, while letting the husband's max out. Beyond maximal earnings, this also makes sense because if the wife outlives the husband (which is often the case), she will start receiving his benefit. If it was allowed to max out, it will mean more for her after becoming a widow.

Of course, there are other factors to consider -- most notably, whether you and your spouse can make ends meet long enough to hold off on receiving benefits. Everyone's goals in retirement are different, as well as our risk tolerance. All of these have to be taken into consideration.

But the chart above provides some important food for thought as you and your partner plan out your Social Security strategy now that the File and Suspend loophole is gone.