Everything you need to know about nondeductible IRAs, and what to do if it’s your only IRA option.

This is the funniest article you will ever read about nondeductible IRAs. I say that with a fairly high degree of confidence, given that the topic isn't exactly fertile ground for comedic exploration. (At least it hasn't been, until I typed that sentence.) Plus, I make fun of rich people later on. That's always good for a yuck or two.

So, let's get this laugh riot started, and fully explore everything you need to know about nondeductible IRAs but were too sleepy to bother finding out. 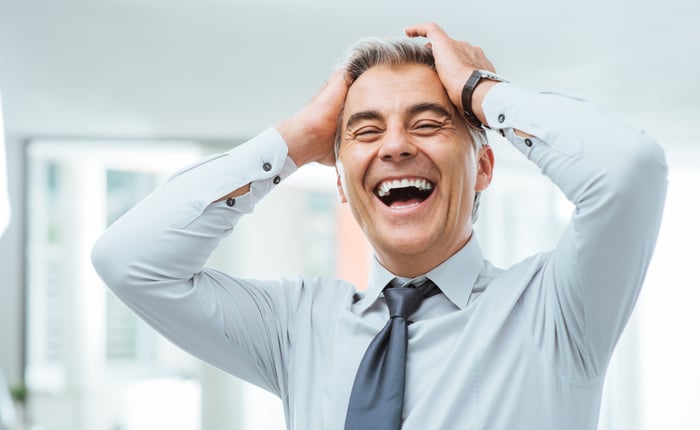 So far, traditional and nondeductible IRAs seem like boring identical twins, right? But increase the microscope's magnification, and one major difference is revealed. And it's a doozie.

Of course, why the heck would anyone choose the evil twin -- or, rather, the less attractive fraternal nondeductible twin -- and pass up the immediate tax break of a traditional IRA, or even the delayed tax break of a Roth IRA?

Six reasons you'd even bother with a nondeductible IRA
In almost every scenario, a Roth IRA or traditional IRA is a better parking spot for your retirement savings than a nondeductible IRA. But those who choose the third, lesser option may not have a choice. Access to (i.e., eligibility for) other types of IRAs can be severely limited by circumstances such as these:

1. You earn a high income and have a workplace retirement plan: The deduction for a traditional IRA contribution is phased out completely -- meaning you get to deduct a big fat nothin' from your income taxes -- in 2017, if you're a single filer with a modified adjusted gross income (MAGI) of $72,000 or more. Same goes for married couples filing jointly with a MAGI of $119,000 or more.

2. You don't have a retirement plan at work, but your spouse does: That's right: Your schmoopy's retirement savings options can kick the traditional IRA deduction out of reach if you're married and filing jointly. If your combined income is above $186,000, the deductibility of your contributions gets phased out until you hit a MAGI of $196,000, at which point it completely disappears and is sucked down your gold-plated master bath toilet (unless you live in New York City, where that income barely gets you an apartment with a bathroom).

Important note: If you're rich and single, well, aren't you a catch! Besides that, if you're single and not covered by a retirement plan at work -- or if you're married and neither of you has a workplace retirement plan -- what a bummer. Workplace retirement plans are great! Anyway, your employer's stinginess does have a silver lining: None of those pesky MAGI calculations you glossed over in the previous two paragraphs apply to you. No matter how obscenely paid you are for doing whatever it is you do, you can fully deduct the maximum allowable contribution to your traditional IRA. You don't even have to give a nondeductible IRA the time of day.

4. You're 59 1/2 or older and want easy access to cash and tax-deferred investment growth: Even without the deductibility of your contribution, a nondeductible IRA still gives you a tax break on your investments as they grow in the account, and if you're over the age of 59-1/2, you no longer have to pay a penalty when you make withdrawals. So you have easy access to savings if you need it, and if you don't, the money that stays put continues to grow on a tax-deferred basis.

5. You want to take advantage of the full IRA contribution limit for the year, regardless of how it affects your taxes right now: Maybe you fall somewhere in the phase-out range of deductibility for a traditional IRA. That doesn't mean you can't max out your contribution. (The full allowable limit for 2017 is $5,500 if you're below the age of 50 and $6,500 if you're 50 or older.) It just means that only part of your contribution will be deductible.

Let's use your 29-year-old neighbor George to illustrate how partial deductibility works. George is single -- he's not ready to settle down just yet -- and in 2017, he was covered by a retirement plan at work. His salary is $65,000, and his MAGI comes to $68,000. George is getting serious about saving for his future and decides to make a $5,500 IRA contribution for 2017. Because he was covered by a workplace retirement plan, and his MAGI is above $67,000, he is only allowed to deduct $1,650 of his $5,500 IRA contribution. When it's time to file his 2016 taxes, George must let the IRS know that he made a nondeductible contribution to an IRA by reporting it on Form 8606.

6. You love paperwork! Not that you needed another reason to blow off even researching whether a nondeductible IRA is worthwhile for you, but this seems like as good a time as any to bring up the added administrative hassle of nondeductible IRAs:

Now that you're fully fluent in nondeductible IRAs (won't your friends be impressed!), it's time for the truly fun stuff: investing your money and watching it grow. The light humor continues with our 13 Steps to Investing Foolishly. Or for the not-so-funny-but-still-important-to-know stuff about IRAs, step on over to the Fool's IRA Center, where we have all kinds of answers to your questions on IRAs.