Please ensure Javascript is enabled for purposes of website accessibility
Log In Help Join The Motley Fool
By Jason Hall - Nov 8, 2018 at 3:54PM

In 2012, hip-hop star Drake Tweeted, "the first million is the hardest," to which oil tycoon T. Boone Pickens replied, "the first billion is a helluva lot harder." Despite the hilarity of an octogenarian oilman engaging a 20-something rapper on social media, Pickens made a cogent point: It's hard becoming a billionaire. It's also hard staying a billionaire, something Pickens also knows about, having made and lost (and partly made back) a vast fortune over the decades.

So what can billionaires teach us about market crashes? The lessons offered by the likes of Warren Buffett, Carl Icahn, and Mark Cuban may not be what you expect, but they're definitely worth learning. Keep reading for eight great market-crash related quotes from billionaires past and present.

ALSO READ: How Worried Should We Be About Howard Marks' Market Caution Warning?

In his 1992 annual letter to shareholders, Berkshire Hathaway (NYSE: BRK-B) (NYSE: BRK-A) CEO Warren Buffett offered some of his typically pithy insight on the danger of short-term market forecasting:

“Charlie (Munger) and I continue to believe that short-term market forecasts are poison and should be kept locked up in a safe place, away from children and also from grown-ups who behave in the market like children.”

More than a quarter-century and two massive market crashes later, Buffett’s incredible skill and long-term mindset has made him one of the world’s richest people. And it isn’t just Buffett who has profited: Tens of thousands of other Berkshire investors became millionaires -- or even billionaires -- along the way.

The best advice that probably wasn’t given

“The time to buy is when there's blood in the streets, even if the blood is your own.” -- Attributed to Baron Rothschild

One of the wealthiest people alive at the time, 18th century banker Nathan Rothschild was credited with having made a fortune following Napoleon’s loss at the Battle of Waterloo. His son, the first Baron Rothschild, is given credit for the quote above and sometimes mistakenly said to have made the supposed fortune following Waterloo. (The thing is the first Baron Nathan Rothschild wasn’t born until 25 years after Waterloo.) Furthermore, there’s no evidence that either father or son made the famous quote above.

Nonetheless, the lesson is real. When a market crash happens, the "blood in the streets" is often your own. But instead of selling and locking in those losses, the best investors take market crashes for what they are: Opportunities to buy.

Even billionaires are terrible at predicting market crashes

“I can say with 100% certainty that (if Donald Trump is elected) there is a really good chance we could see a huge, huge correction.” -- Mark Cuban

An outspoken critic of many of President Trump’s policies, Cuban made numerous similar predictions in the months leading up to the November 2016 election. In September, the billionaire owner of the NBA Dallas Mavericks would tell Fox Business’ Neil Cavuto “If the polls look like there’s a decent chance that Donald could win, I’ll put a huge hedge on that’s over 100% of my equity positions… that protects me just in case he wins.”

As often happens, this short-term prediction was wrong. Stocks immediately surged after Trump’s election, and the S&P 500 has gained over 33% in total returns in the two years since: 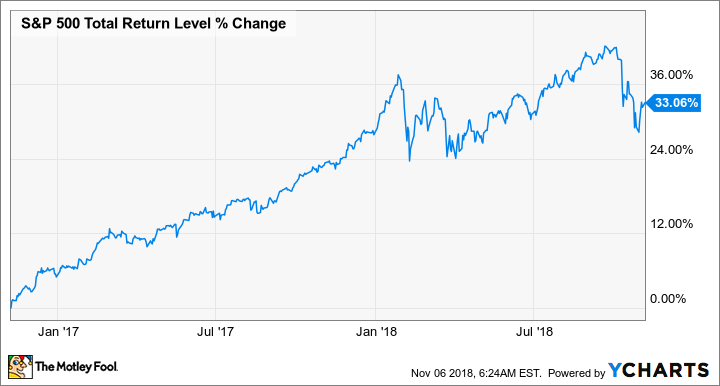 “Opportunities come infrequently. When it rains gold, put out the bucket, not the thimble.” -- Warren Buffett

Yet another quote from the Oracle of Omaha (spoiler: there will be more) that stresses the importance of taking advantage of market opportunities.

The stock market generally spends far more time going up than it does going down. But when it does fall, it almost always happens quickly and unexpectedly, and investors who take action when their stocks have fallen sharply in a market crash, will reap the long-term rewards when it recovers.

Separate the business from the stock

Amazon.com has made Jeff Bezos into one of the wealthiest people to ever live, and helped countless others become rich along the way. But plenty of people don’t realize that Amazon’s stock price fell almost 95% during the dot-com crash. Here’s what Bezos had to say about that experience, and how he managed to avoid freaking out:

You don’t have to be a billionaire to profit from this advice. By focusing on the business performance, not the stock price, it’s much easier to avoid selling. It can also help you find great buying opportunities when the market crashes.

"Stock market bubbles don't grow out of thin air. They have a solid basis in reality, but reality as distorted by a misconception.” -- George Soros

The truth of Soros’ words was evident in the crashes around the dot-com and housing bubbles. Plenty of stocks deservedly fell sharply, but just as many solid companies also took a beating when fearful investors sold everything they owned.

Soros, with a net worth of more than $8 billion, is perhaps best-known for taking a short position on the British pound decades ago that resulted in a $1 billion profit. In recent years the 88-year-old Soros has focused on his philanthropy efforts, but his hedge fund continues to own over $6 billion in several hundred different U.S. stocks.

It's okay to be concerned; just don't think you can predict a crash

“I am concerned about the level of the market. But I also made it clear on the conference call (and I believe as Reuters reported it), that it is almost impossible to predict what a market will do in the short term. There are too many variables.” -- Carl Icahn

With an approximately $24 billion fortune and decades of success as an activist investor, business leaders and investors listen when Icahn speaks. And Icahn has acknowledged on more than one occasion in the past when he’s concerned that the market may be ready for a crash.

But as this quote emphasizes, even investors with the success of Icahn generally acknowledge that there’s little chance anyone can predict the next crash. If a billionaire 24 times over like Icahn can’t predict the next market crash, should you trust someone who says they can?

It's simple (but don't mistake simple for easy)

Warren Buffett issued this now-famous quote during an interview with Charlie Rose on PBS on Oct. 1, 2008. At that point, the S&P 500 had fallen 26% over the past year. Plenty of people were fearful, and with stocks down 26%, there were plenty of opportunities to be greedy when others were fearful.

Here’s the catch: The market would fall another 42% before finally reaching bottom in March 2009, down almost 60% from the October 2007 peak. It may have been simple to be greedy when others were fearful in late 2018, but holding on while the market continued to fall even further wasn’t easy. 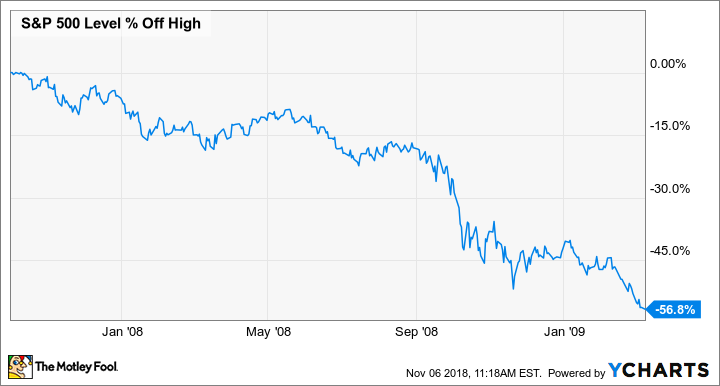 In hindsight, just about anytime between October 2008 and October 2010 would have been a great time to buy. But for that two-year window, when the global economy ground to a halt and stocks seemed like they might never recover, Buffett's "simple" idea may not have been so easy to actually do.

The big lesson? Your temperament will play a big role in your ability to ride out downturns, and take action when the market crashes.

Think long-term, be ready to act when there's opportunity

Market crashes are a reality of investing in stocks, and even billionaires can’t really predict when the next one will happen. Instead of trying to predict and avoid the next crash, successful investors use them as buying opportunities, focusing on finding great businesses that the market has beaten down.

You may not have a billionaire’s resources, but you can still invest like one. Focus on the business, not the stock; think of market crashes as buying opportunities, not times to sell; acknowledge that it sounds simple, but it won’t necessarily be easy to do when it feels like the world is coming apart.