Over the past month, U.S. lawmakers have focused their attention on the tax-avoidance strategies that Apple (NASDAQ:AAPL) has put in place to minimize its U.S. corporate income tax bill. With sophisticated corporate structuring designed to take advantage of various U.S. and foreign tax laws, companies can successfully navigate differences in the way nations handle international taxation to minimize their tax exposure.

The controversy has reached worldwide scope, as European leaders have taken up the issue after outrage over techniques that Google (NASDAQ:GOOGL), Starbucks (NASDAQ:SBUX), and Amazon.com (NASDAQ:AMZN) have used to try to recognize taxable income in the most favorable jurisdictions possible. In particular, the U.K. has increased its scrutiny of those three companies following reports that their British business units have paid minimum taxes despite having substantial sales, and European Union officials estimate that overall, national governments lose more than $1 trillion from both legal techniques and illegal tax evasion.

Back in the U.S., all the talk about avoiding tax, however, raises the question of where, if anywhere, U.S. multinationals like Apple end up having to face the tax man. A recent article from the Tax Foundation approached this question and gathered information from foreign tax credit forms filed on 2009 corporate income tax returns to determine which countries ended up collecting the most in foreign taxes not just from the four companies mentioned above but from the entire class of U.S. multinationals doing business abroad. Here are the five countries that gathered the most tax revenue. 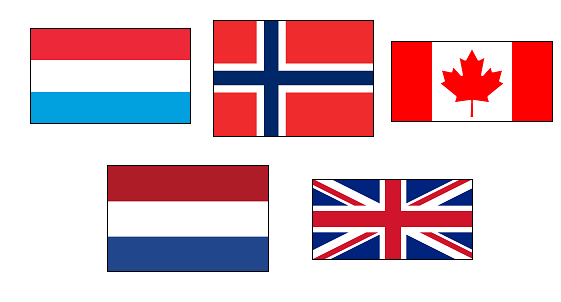 This tiny country with barely half a million people has a reputation for being a tax haven, despite the assurances of government officials there that its main attraction is political stability and a reasonable regulatory environment. With U.S. multinationals paying $7.33 billion in taxes on net taxable income of $29.14 billion, the country imposes an effective average tax rate of just over 25%.

4. Norway
The Scandinavian nation ranks highly in quality of life, but corporations aren't in any hurry to get taxed there, as Norway collected $7.81 billion in taxes on $12.67 billion of taxable income, equating to a tax rate of more than 61%. Nevertheless, the allure of rich natural resources draws companies in despite the high tax rates, and many foreign energy companies have joined Norway's own Statoil in tapping rich reserves off the Norwegian coast.

3. Canada
Our neighbor to the north took in $7.97 billion in taxes on $27.88 billion of taxable income in 2009, amounting to an effective tax rate of 28.6%. Like Norway, Canada has extensive natural resources that draw U.S. investment, but the country's proximity to the U.S. encourages a wide array of shared business interests that lead to foreign income for U.S. companies.

2. Netherlands
The Netherlands weigh in with the lowest tax rate among the top five tax-gathering countries for U.S. multinationals, coming in just under 20%. But the nation remains a popular place to earn income, with its $46.19 billion in taxable income topping the list of nations worldwide. Apply those tax rates, and you'll get a total of $9.16 billion in foreign taxes paid.

1. United Kingdom
The U.K. doesn't attract the most taxable income, but its higher tax rates lead to the most tax being paid, at $9.22 billion. With average taxes of 24%, multinationals have about $38.39 billion in taxable income within the British Empire's borders.

$100 billion in taxes
All told, the Tax Foundation analysis found that U.S. multinationals pay more than $100 billion in foreign taxes in various jurisdictions around the world. That won't necessarily make outraged individuals in the U.S. any happier, especially because the U.S. foreign tax credit system allows companies to reduce their U.S. tax by the amount of foreign taxes paid in some instances. But as a matter of fairness, the real question is whether companies actually earn income in those jurisdictions, rather than simply setting up business entities whose only purpose is to serve as a tax haven. Only once countries work together to close loopholes and move corporate tax rates toward parity will multinationals have less incentive to make tax-motivated corporate maneuvers.