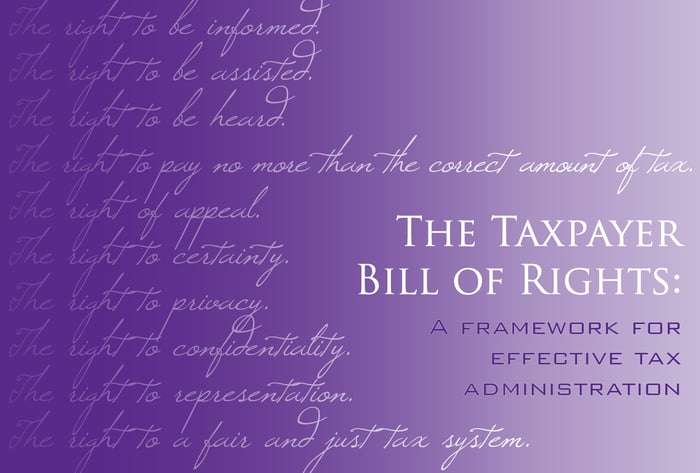 For many years now, we've covered the noble efforts of Nina Olson -- someone most Americans have never heard of. She's been working hard for us individual taxpayers, though, as our "national taxpayer advocate," and thanks to her office, the IRS has just adopted a new "Taxpayer Bill of Rights." Whether you're worried about a tax audit or not sure if you should contest a decision, the Taxpayer Bill of Rights can help you.

In a nutshell, the Taxpayer Bill of Rights tells us that we have:

Here are five things you should know about it:

2. Much of what it says will be news to most Americans. Per Olson, "taxpayer surveys conducted by my office have found that most taxpayers do not believe they have rights before the IRS and even fewer can name their rights." That's a shame -- and scary, too, for someone facing a tax audit or who thinks they're on their own against the IRS. The new bill is designed to be succinct and clear, and it's likely to reach many millions of taxpayers, as it will be included in the IRS' Publication 1, a document often included in IRS correspondence with taxpayers. Thus, someone receiving a notice of a tax audit may also be receiving a list of his or her tax rights, which is likely to be reassuring.

3. It can help during a tax audit. Many folks may not realize it, but they can have a tax professional represent them when facing a tax audit or dealing with the IRS in other ways. If they disagree with an IRS ruling, they can contest it, with their position considered. They can appeal IRS decisions and have their case heard by folks who are not IRS representatives. A particularly interesting right is the right to finality -- meaning that taxpayers should be informed about how long they have to make a case and how long the IRS has to initiate a tax audit on a particular year's tax return, among other things. There is no need to wait and wonder about tax audits and other matters indefinitely.

4. It includes some wishful thinking. For those with some familiarity of our current tax system and the condition of the IRS, two of the rights seem kind of aspirational: The Right to Quality Service and The Right to a Fair and Just Tax System. IRS employees may be doing their best, but the IRS has faced sizable budget cuts in recent years, leaving them less able to deliver high-quality service -- and leaving our tax system less fair and just, too, if it means that more tax avoiders slip through the cracks without receiving a tax audit. Meanwhile, the tax code has grown so massive (4 million words!) and complex that it costs Americans many dollars and billions of hours to prepare their returns.

Its loopholes permit many to legally avoid taxation, too. In a recent survey, only 16% of respondents found our tax code to be fair. The Taxpayer Advocate Service has reported that 61% of 100 million calls to the IRS last year were unanswered, and the waiting time to speak with an IRS representative surged from about three minutes to 17 between 2004 and 2012. With employee training funds cut from $172 million to $22 million between fiscal years 2010 and 2013, taxpayers are increasingly unlikely to receive good service. If Congress were to better fund the IRS and the tax code were reformed and simplified, these two rights would reflect what we have instead of what we should have.

5. It offers hope. Some of the information above may be depressing, but know that the situation isn't hopeless. Consider, for example, that the new Taxpayer Bill of Rights was adopted at all -- that's a meaningful step in the right direction. As much as we may like to grouse about the IRS, the truth is that much of its future lies in the hands of Congress, which has the power to make big changes that could benefit all of us. Giving the IRS more money, for example, is likely to lead to more tax audits of tax avoiders and more tax dollars being collected. It will be money well spent, money that more than pays for itself.

Each of us has a little power in this situation, too. Consider contacting your representatives in Congress to let them know what you think about the IRS, its funding, and the new Taxpayer Bill of Rights.

Worried About a Tax Audit? Learn These 5 Things About the New Taxpayer Bill of Rights @themotleyfool #stocks Next Article
Current