Taxes may be the only thing most people pay without actually knowing how the money is spent.

For most Americans, spending $10,000 remains a big deal. That's the kind of money we spend on cars, down payments for homes, once-in-a-lifetime vacations, or parties marking major life events.

Not many of us can shell out $10,000 so casually that, if asked about where it went, they wouldn't even know. However, the average American family pays the federal government at least that amount in taxes each year, and many of us only have a vague sense of where the money goes.

Yes, we know taxes pay for everything from roads to defense, social programs to public television. But the specific breakdown of tax spending is something most Americans give little thought to -- even though taxes are the biggest single line item for many Americans each year. 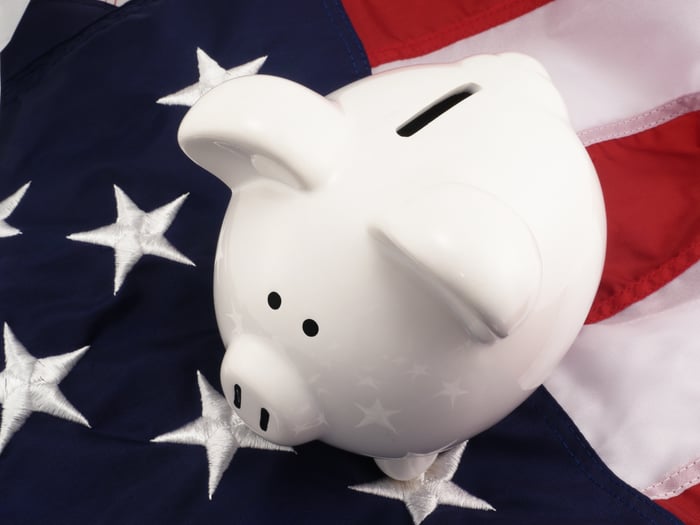 How much do we actually pay?

Before breaking down where the federal government spends our money, it's worth considering how the amount of taxes the average American pays has been calculated. In a recent article, my Motley Fool colleague Brian Feroldi broke the numbers down using data from the Internal Revenue Service (IRS).

Americans filed more than 150.6 million tax returns in 2015. During that year they also earned $10.17 trillion in adjusted gross income and had a total tax liability of $1.45 trillion. Some quick division means that the average gross income per return was $67,564 while the average federal tax hit was $9,655.

He also noted that many lower-income Americans either pay no taxes or even get money back because of the Earned Income Tax Credit. Take those returns out of the picture, he wrote, and "you are left with 99 million Americans who recorded an average federal tax hit of $14,654."

How are our tax dollars spent?

Whether the average tax liability is just under $10,000 or a little less than $15,000, it's still a lot of money for most people, and it's important to know where those dollars go. Pew Research broke down how the United States federal government spent $3.95 trillion in 2016, with senior writer Drew DeSilver noting that the country is basically a giant insurance company that has a side business in defense:

About $2.7 trillion -- more than two-thirds of the total -- went for various kinds of social insurance (Social Security, Medicaid and Medicare, unemployment compensation, veterans benefits and the like). Another $604 billion, or 15.3% of total spending, went for national defense; net interest payments on government debt was about $240 billion, or 6.1%. Education aid and related social services were about $114 billion, or less than 3% of all federal spending.

Every other program -- public broadcasting, NASA, national parks, foreign aid, and everything else -- adds up to the remaining 6% of the federal budget. Here's how each major spending area breaks down:

Historically, according to Pew, federal spending has hovered around 20% of gross domestic product (GDP). In 2016 total spending was 21.5% of GDP, and over the long term, the biggest growth in spending has been on the various human services programs (including Medicare and Social Security). The share of GDP spent on defense has actually fallen to 3.3% in 2016 after hitting a high of 6% in 1986.

While individual Americans have no direct control over how their tax dollars are spent, it's important to know where the money goes. It's especially important to understand that any major increases -- say in defense spending, as President Donald Trump has proposed -- require cuts elsewhere. With more than two-thirds of the budget going to social insurance programs, it's hard, if not impossible, to make major changes without impacting those programs.

Most of your tax dollars go to taking care of other Americans, followed by paying for defense. The amounts devoted to everything else, including the most controversial and hotly debated government programs, amount to a relative pittance compared to the overall amounts being spent.