The Senate waded into the tax reform debate last week, adding its proposal to the House tax bill introduced at the beginning of November. Both proposals have seen fast and furious changes as lawmakers try to figure out how to achieve their intended policy goals while remaining within the fiscal and legal constraints of the process under which they seek to pass legislation.

Yet one recent move from the Senate has set up the potential for a hugely disruptive event in the future, replaying history and showing the shortcomings of the Congressional budget process. By encouraging short-sighted strategies that create fiscal chokepoints, lawmakers threaten to put the American public at risk at a time when many of them won't have to deal with the consequences. 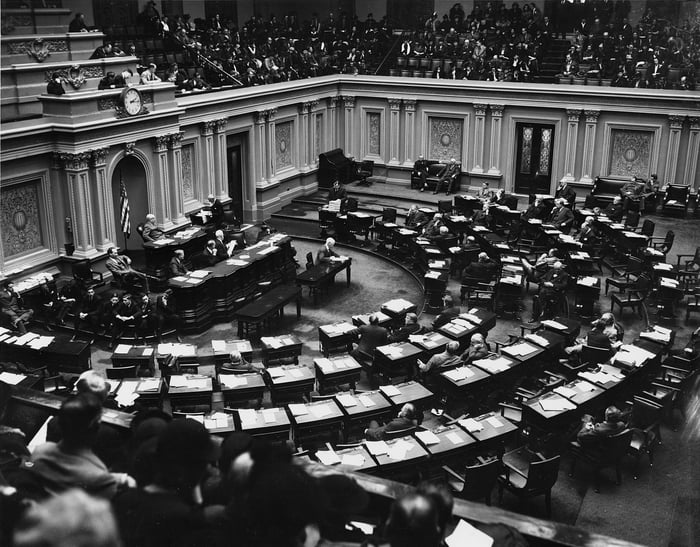 What the Senate wants to do

The version of the Senate tax proposal that Republican leaders discussed on Tuesday night includes a couple of controversial provisions. First, it would include the repeal of the individual mandate under the Affordable Care Act, which scoring from the Congressional Budget Office has said would result in several hundred billion dollars in deficit reduction over the next decade. Many oppose such a move because of the increase in uninsured Americans that would result, with some questioning the actual financial impact of repealing the Obamacare provision.

The new provision that threatens future chaos is the addition of a time limit after which many key aspects of the Senate tax plan would disappear. Although corporate tax reform measures would be permanent, the individual tax benefits that the bill includes, such as tax bracket reductions and increases to the child tax credit, would be subject to sunset provisions that would have them expire at the end of 2025.

Why the Senate is making a fiscal cliff

The Senate has chosen to establish an expiration date for individual tax benefits because it needs to operate within key budget constraints. The net impact of any tax reform package can't increase the budget deficit by more than $1.5 trillion over the next 10 years, and it must also not increase deficits beyond the 10-year window. By technically making the individual tax cuts temporary, the Senate version can afford to make cuts elsewhere while still complying with the budget scoring requirements, because the costs of the provisions in 2026 and thereafter won't count against the limits.

Deficit-conscious lawmakers on both sides of the aisle fully understand the game that Congressional leaders are playing, and they know what's likely to happen as a result if temporary tax cuts make their way into the final legislation. You don't have to look too far back into history to see that the political realities of offering tax cuts makes it almost impossible to prevent temporary cuts from becoming permanent.

We've seen this story before

The tax cuts of the early 2000s included 10-year sunset provisions that set up the first fiscal cliff at the end of 2012. Essentially, the lawmakers who passed the tax cuts put their counterparts a decade later in the untenable situation of figuring out how to deal with the threat of huge tax increases that would result simply by allowing the legislation automatically to undo the previous reductions.

In the end, the resolution to the 2012 fiscal cliff included extending most of the original tax cuts. Tax rates on upper-income taxpayers were allowed to rise, as were favored rates on investment income like long-term capital gains and qualified dividends. Extensions of various tax breaks such as family oriented credits and the alternative minimum tax patch also cost the government money but were politically necessary.

A similar fate would await lawmakers in 2025 and 2026 if the Senate's latest temporary cut gets passed. Today's lawmakers fully understand that when you consider the inevitable extension of at least a portion of those cuts, the total cost of tax reform would dramatically exceed the budgetary limits.

The purpose of budget-scoring provisions is to hold lawmakers accountable for their actions. By using tactics like adding expiration dates that will almost certainly disappear later on, Congress only adds to public perception that lawmakers will bend rules at will to achieve their ends. That erosion of confidence serves neither major political party nor the American public in the long run.

Did the Senate Just Create the Next Fiscal Cliff? @themotleyfool #stocks Next Article
Current