Please ensure Javascript is enabled for purposes of website accessibility
Log In Help Join The Motley Fool
Free Article Join Over 1 Million Premium Members And Get More In-Depth Stock Guidance and Research
By Wendy Connick - Feb 7, 2018 at 8:06AM

Avoid the most tragic (and costly) mistakes when hiring someone to prepare your return.

Most tax preparers are honest, competent, and determined to get the best possible deal for their clients. But if you're unlucky enough to hire a tax preparer who doesn't share these traits, you could end up paying a great deal for your mistake -- potentially for years to come. The IRS has provided the following tips (among others) to help you screen out undesirable tax-preparers and find someone who can do a good job on your return.

Be wary of big promises

Disreputable tax-preparers and tax preparation firms may claim to be able to get you a bigger refund than other preparers, or they may base their fees on the size of your refund. Some even promise a refund to all their clients. Those are promises that no tax preparer should make, because it's unlikely they'll be able to fulfill it without breaking the law.

Tax preparers who promise big refunds may deliberately add false information to your return. In the short term, you probably will get that refund; in the long term, you'll likely end up subject to an IRS audit and a huge tax penalty, and in extreme cases, you could even face criminal charges. That's reason enough to pick a tax preparer with integrity, even if it means you won't get a refund this year. 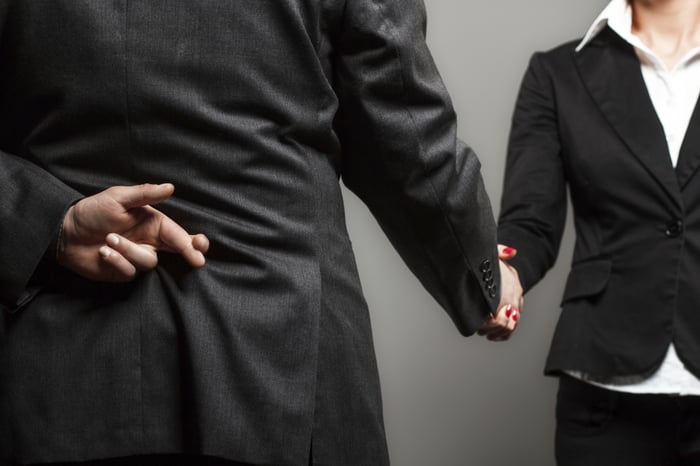 The Preparer Tax Identification Number (PTIN) is a number the IRS assigns to professional tax-preparers. Anyone who prepares all, or substantially all, of a tax return or refund claim must have an active, valid PTIN or face serious penalties. Preparers must renew their PTINs every year; they usually keep the same number from year to year.

Someone who can't qualify for a PTIN or doesn't bother to get one is not someone you want preparing your tax returns. Before hiring a preparer, check the IRS Preparer Directory. If they have a valid PTIN and a professional credential (or have an "Annual Filing Season Program Record of Completion" from the IRS), they'll be in that directory.

Note that a CPA or other pro who gives tax advice but doesn't personally prepare returns doesn't need a PTIN. In that case, the members of the firm who do the actual return processing would have PTINs.

Some tax preparers will offer to deposit your return into their own bank account. These preparers often target taxpayers who can't or won't open a bank account in their own name, supposedly saving them the cost of cashing the refund check -- but it's a service that's just begging to be abused by unscrupulous types. Unsurprisingly, it's completely against IRS rules for preparers to deposit client refunds in their own accounts, and even if it weren't, it would be a bad idea. The appropriate place for your refund check is your own bank account; choosing direct deposit will get you your money at the earliest possible moment. If you don't have a bank account, you'll need to request a paper check for your refund and then find a place to cash it.

Have you ever read the statement just above the signature line on your Form 1040? It says, "Under penalties of perjury, I declare that I have examined this return and accompanying schedules and statements, and to the best of my knowledge and belief, they are true, correct, and accurately list all amounts and sources of income I received during the tax year."

In other words, lying on your tax return and then signing it is the same crime as lying under oath in court, aka perjury.

When you sign a blank tax form, you are promising the federal government that the return has been accurately prepared -- even though you have no idea what the tax preparer will put on that return. If the preparer puts fraudulent information on there, you'll be just as responsible as the preparer is, and you can expect the IRS to treat you just as harshly.

If you decide to hire someone to do your return, choose a CPA or enrolled agent (EA). These professionals are held to high standards of competency and integrity, and they're allowed to represent you before any department of the IRS in the event you're audited or decide to appeal an IRS decision. All in all, choosing preparers who have solid credentials and run their businesses in a professional manner helps to guarantee that you'll minimize your tax bill without running afoul of the U.S. tax code.