Less than 1% of tax returns get audited by the IRS, but this percentage varies significantly depending on several factors. There are several "red flags" that the IRS looks for that can make it far more likely that you'll be audited and others that make it a near certainty. Here's a list of 10 of the biggest IRS red flags and what you can do to prepare.

Not surprisingly, the IRS dedicates more of its limited resources to ensuring that the highest-earning households pay all of their taxes. After all, if it catches a substantial error on the return of a taxpayer who earned $5 million last year, it's likely to bring in significantly more money than a mistake on the return of a $50,000 earner. 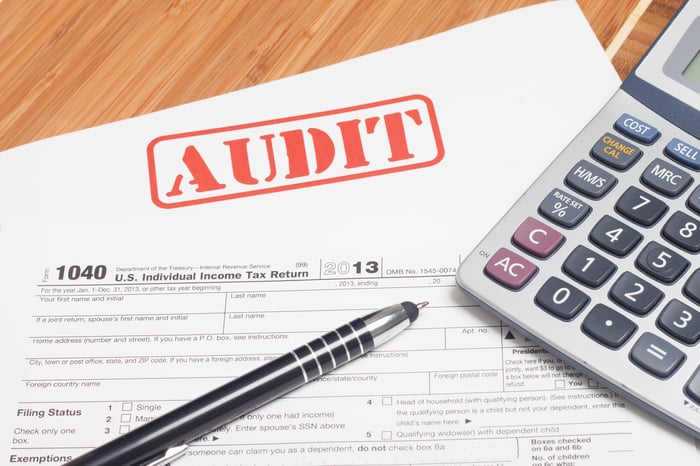 In addition to looking at high-income returns, where the IRS feels it can get the best potential returns on its efforts, it also likes to examine returns that report little or no income.

Here's something that you may not know. When your employer sends you a W-2, or you get a 1099 from a company that paid you for your services, they also send a copy to the IRS.

One of the checks the IRS does is to compare the information they've received with the numbers you reported on your tax return. If anything doesn't match up, you can expect to get a bill for the difference.

According to Dave DuVal, chief consumer advocacy officer for TaxAudit, there are several ways that the IRS could potentially flag business expenses.

"Self-preparers should be cautious of accidental duplication of employee and business expenses, and of taking losses on activities that could appear to the IRS to be due to a hobby rather than a business activity," says DuVal.

The first part of this cautionary statement refers to the distinction between "unreimbursed employee expenses" and "business expenses," which are two different things, and are therefore reported in two different places on your tax return. If there's apparent duplication, it could catch the IRS's attention. For example, if you claim a $1,000 unreimbursed employee expense for travel expenses and a business travel deduction for the exact same amount, it could raise some eyebrows at the IRS.

The latter part of DuVal's warning is in reference to the IRS's distinction between a business (which needs to have a reasonable expectation of profit) and a hobby. Hobby expenses aren't deductible, while business expenses are, so if your business looks like a hobby on paper, the IRS may ask some questions.

5. Itemized deductions that are way above average

The IRS knows how much money average people of certain income levels contribute to charity, pay for medical expenses, and so on. Any itemized deductions that are far above the average for someone in your income bracket can be a potential audit trigger.

There are strict documentation requirements for charitable contributions, so be sure you can properly document your claimed deduction, especially if it's unusually high.

"Tax returns with what appear to be inflated rental expenses are frequently caught in the IRS net," says DuVal. "Not knowing the difference between a deductible expense and one that must be capitalized over a number of years could result in a disaster in an audit."

Specifically, many do-it-yourself tax filers who are new to rental property ownership don't realize that some expenses can be deducted in full, while others need to be capitalized over several years. As an example, property repair expenses can generally be deducted, while property improvements need to be depreciated over a period of 27.5 years.

Admittedly, there is some gray area as to what expenses fall into which category. However, as a general guideline, something that is a one-time fix is a repair, while something that increases the value of a property or extends its life is a property improvement. For example, a kitchen renovation is a property improvement, and therefore needs to be capitalized. If you spend $20,000 renovating the kitchen of a rental property and try to deduct the entire expense, it's a big red flag.

Be sure to know the difference and prepare your return accordingly.

A quick way to get audited is to claim a dependent who is also being claimed on someone else's return.

"When two people claim the same dependent, the IRS gets involved. Although separated and divorced parents who have custody have the clear advantage, they still have to prove everything by providing birth certificates, school records, and more," says DuVal.

People who file as heads of household are also likely to face additional scrutiny. Or, if you have an adult child who you claim as a dependent, who then files their own tax return as an independent adult, it will set off bells at the IRS.

8. Not enough income to support your lifestyle

If you claim deductions that don't match your income level, it can be a potential audit trigger. For example, if you claim a deduction for the property taxes you paid on a new Porsche, a $200,000 boat, and a million-dollar home, and your income is $50,000, it could look like you may be hiding something.

Having business income that you report on a Schedule C raises your risk of audit all by itself. Simply put, there's a lot of room for abuse when it comes to business deductions.

Your audit risk goes up even more if your Schedule C has just the right amount of income and expenses to qualify you for a big credit, such as the Earned Income Tax Credit.

"The available credit is as high as $6,444 for a single taxpayer whose income is below a certain threshold. Taxpayers who claim EIC and whose returns include a Schedule C business form should be prepared to show proof of all income and expenses listed on the return," says DuVal.

To be clear, you should take advantage of every single tax break to which you are entitled. And obviously, there are some audit risks that you really can't do much about, such as having a high income.

Just be aware if you're at a higher risk for an audit so you can be extra certain to prepare. Be sure you can document every deduction and credit you claim, so that if asked, you can back it up. Many tax audits don't result in any additional taxes -- in fact, about 5% of people who are audited end up getting a refund. Often, the IRS just wants to take a closer look at suspicious-looking items to make sure that everything checks out.