Please ensure Javascript is enabled for purposes of website accessibility
Log In Help Join The Motley Fool
Free Article Join Over 1 Million Premium Members And Get More In-Depth Stock Guidance and Research
By Maurie Backman – Updated Apr 3, 2018 at 11:58AM

You really shouldn't put off preparing your tax return any longer. Here's why.

If you haven't started working on your taxes as of today, you're at serious risk of losing money and running into trouble. No, this isn't an April Fools' Day joke. With the tax filing deadline just over two weeks away, now's the time to get serious about that return. Consider yourself warned.

You can't afford to wait

First, some good news for those who have yet to begin: Returns are due on April 17 this year rather than April 15. The reason: April 15 is a Sunday, and April 16 is Emancipation Day, a legal holiday in Washington. The result? We all get until April 17 to file our returns -- but don't use that an as excuse to delay even further. At this point, you're running up against the clock, and the longer you wait, the greater your chances of missing the deadline or rushing through the filing process and making a glaring mistake. 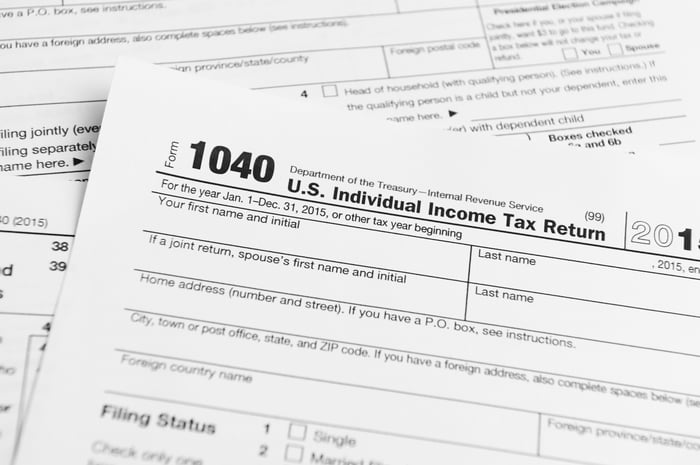 What happens if your tax return contains errors? Well, if the information you provide doesn't align with what the IRS has on record, you'll instantly increase your audit risk, thereby subjecting your entire return to further scrutiny. Furthermore, if it's a glaring error the IRS can't or won't reconcile, your return might get rejected outright, which means you'll need to go through the process of submitting it all over again. Neither scenario is ideal.

Then there's the late-payment penalty, which is smaller than the failure-to-file penalty but potentially damaging nonetheless. Let's say you manage to file your return on time, but realize you owe money at the very last minute and don't have it on hand to pay your IRS debt. In that case, you'll accrue interest of 0.5% of your unpaid tax bill for each month or partial month that the debt remains outstanding, up to a total of 25%.

And that's why you can't afford to keep procrastinating on your tax return. The longer you wait, the more you risk not only making a mistake, but also racking up costly penalties that make filing more painful than necessary.

Be careful about filing for an extension

At this point, you may be thinking: "So what if I keep putting off my taxes? Worst case, I'll just get an extension."

It's a good idea in theory, but keep in mind that all a tax extension will do is give you more time to submit your return; it won't give you more time to actually pay your tax bill. In other words, if you don't manage to complete your return by April 17, an extension will give you six extra months to submit it, thereby helping you avoid the failure-to-file penalty we just talked about. But the late-payment penalty will still apply if you don't pay off your tax bill by April 17.

While filing taxes is far from fun, it's time to power through the process rather than put it off any longer. So if you haven't begun working on that return, carve out some time immediately and just get it done. You'll rest easier knowing that this one nagging but necessary task is finally off your plate.