The tax reform package that became law late last year had substantial impacts on American taxpayers. Major changes to the standard deduction, various credits and itemized deduction provisions, and individual tax rates left many people confused about whether they'd end up saving money or paying more on their individual returns. Yet there's one area where tax reform unambiguously resulted in lower taxes: the corporate tax rate.

Prior to tax reform, the U.S. had a corporate tax rate that was just under 39%. That consisted of a 35% federal tax rate on corporate income, with the remainder coming from state-level taxes that most U.S. states impose. That put the U.S. in the top three countries in the world in terms of corporate tax, according to figures last year from the Tax Foundation. Now, though, federal rates on corporate income have fallen from 35% to 21%. That puts the total federal and state burden at around 24%, just above the worldwide average of roughly 23%.

Still, even when you ignore tax havens with little productive economic activity, the new U.S. rate is far from the lowest level you'll find. Among major industrialized nations, Hungary leads the way, and Ireland isn't too far behind. 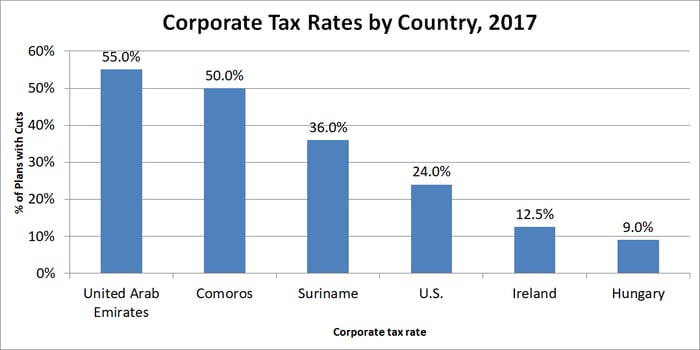 For many businesses, the biggest benefit of tax reform will come not from lower rates but rather from simplified calculations. With some complex tax breaks going away to help pay for lower tax rates, companies hope that the new tax regime will be easier to navigate as well as result in lower cost.