Please ensure Javascript is enabled for purposes of website accessibility
Log In Help Join The Motley Fool
Free Article Join Over 1 Million Premium Members And Get More In-Depth Stock Guidance and Research
By Matthew Frankel, CFP® - Jan 27, 2019 at 9:10AM

It’s tax season again, so here are three things to keep in mind for this (and future) tax years.

Tax season is set to begin, and while you've probably seen tons of articles about tax deductions and tips to help you file your return and maximize your refund, it's also a good time to discuss what not to do.

For example, what happens if the filing deadline approaches and you discover that you'll owe the IRS money you can't afford to pay? There's a right and a wrong way to deal with that, so here's what you need to know about it -- as well as two other common situations Americans find themselves in. 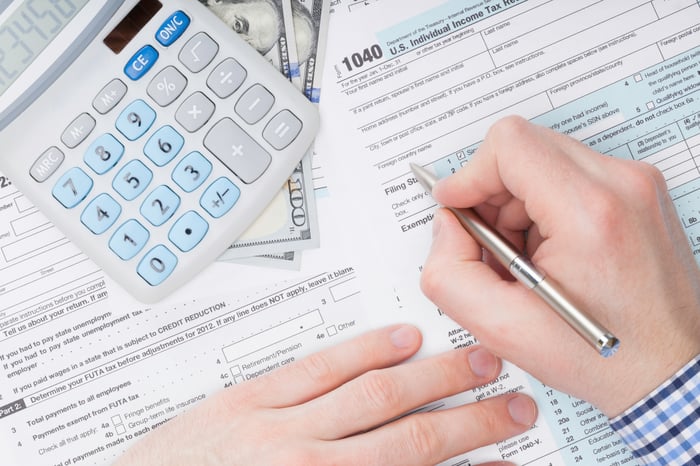 Not enough withholding or failure to make estimated payments

This is likely to be a major issue as tax season gets underway in the next few weeks. Thanks to the numerous changes made by the Tax Cuts and Jobs Act to the U.S. tax code starting with the 2018 tax year, reports have started to indicate that many people may not have had enough withheld from their paychecks this year.

Underpayment is also a common problem among self-employed individuals, who are generally required to make quarterly estimated tax payments throughout the year. This is especially true for those whose incomes fluctuate significantly from year to year. For instance, if you earn $50,000 one year and withhold the following year's taxes based on that income, then end up earning $100,000, you'll likely find that you've dramatically underpaid your taxes.

Unfortunately, if you didn't have enough withheld from your paychecks in 2018, it's too late to rectify the situation. Fortunately, the IRS is giving a little relief to taxpayers for 2018 to help compensate for the uncertainty surrounding tax reform. Now, an underpayment penalty won't kick in as long as taxpayers pay at least 85% (typically 90%) of their tax due in the form of estimated payments and withholding throughout the year. Even so, it's a smart idea to make sure in this and future years that your withholding covers the lion's share of your tax burden.

Missing the deadline to file

Let me be 100% clear about this. Under no circumstances should you fail to file your taxes on time. Even if you can't pay, you need to get your tax return in by April 15, or by Oct. 15 if you filed an extension.

Here's why. The penalty for underpayment of tax is certainly significant. You'll be charged a penalty of 0.5% per month or partial month that your tax remains unpaid. Plus, you'll pay interest on the unpaid amount at the current rate (6% annually as of this writing). To put some numbers behind this, if you owe the IRS $5,000 and pay it three months late, you can expect interest and penalties of about $150.

However, the penalty for failing to file your taxes is much worse -- 10 times worse, to be exact. Instead of 0.5%, you'll be charged 5% of the unpaid balance for each month or partial month past the tax deadline if you don't file. If you owe the IRS $5,000 and don't file your tax return until three months past the deadline, you can expect a total of about $825 in interest and penalties.

So, in this situation, if you simply filed your tax return on time and waited three months to pay, you would have saved yourself about $675.

Furthermore, it's worth mentioning that despite its reputation, the IRS truly is great about working with people who make an effort to pay their taxes but come up a little short. For example, the IRS makes it very easy to set up an installment agreement allowing you to pay your taxes over a period of as many as 72 months. In other words, a seemingly insurmountable $5,000 tax debt can become a monthly payment of less than $70.

And this is just one way the IRS works with people. The bottom line is that there is literally no good reason for not filing your taxes on time, and plenty of good reasons for doing so.

Incorrect information on your tax return

The widespread adoption of tax preparation software has greatly reduced the occurrence of mathematical errors and typos on tax returns, but that doesn't mean that they've gone away entirely.

For example, it's easy enough to accidentally type an extra zero (or to omit one) when claiming a deduction or credit. If you donated $1,000 to charity last year, for example, and accidentally input $10,000 on your tax return, you could find yourself in hot water with the IRS.

Another common error is entering your bank information incorrectly, which happens often enough that the IRS has a help page dedicated to this on its website. To receive a directly deposited refund, you'll need to give the IRS your bank's routing number and your account number. So, what happens if one or both of these numbers are entered incorrectly? There are a few possible scenarios, the most common of which are:

In short, if you enter your bank information incorrectly, there's no guarantee that you'll get your refund at all. Double- and triple-check this and all other information on your tax return. It'll take more time, but it's worth it to get it right.

These mistakes can cost you

As you can imagine, these mistakes can be costly. Insufficient withholding or failing to file can translate to hundreds or even thousands in unnecessary costs. And putting the wrong information on your tax return could even cause you to lose your refund entirely.